Gig antics, part 1: are you local?

Just over a week ago, I turned 40. Fortunately, my mid-life crisis didn't take the form of waving cheerio to Mrs Specs, while hurtling down the cul-de-sac in the wrong direction on a Harley Davidson with a supermodel in the sidecar. Instead, I went to five gigs in seven days.

I go to concerts as often as possible as it is, of course, but I took myself a bit by surprise with this. There was some forward planning - we booked a couple of the gigs months ago - but, nearer the time, I noticed a couple of other irresistible shows that all fell in the same week. Since Mrs Specs wanted to come along to all but one of them, we just thought, 'what the hell' and went for it. (We were careful to take some leave, too - otherwise there might've been some 'early morning coping issues'.)

In this post, I'll cover the first half of the week, which found us easing ourselves fairly gently into the mayhem. First port of call was Epsom Playhouse, pleasingly close at hand to where I work. Playing in the studio theatre there was Barb Jungr, a jazz singer I've admired for ages but never had the chance to see live. I couldn't quite believe that someone of that stature was playing the smaller of two spaces in my local venue - but when we arrived, it made perfect sense.

Over the years, Jungr has built up a fascinating repertoire. She has recorded a wide range of material, but seems to feel a particular affinity for what she terms 'the new American Songbook' - skipping a generation or two on from the Gershwins and Porters and focusing instead on the likes of Bob Dylan (two CDs' worth, in fact), Joni Mitchell, and Leonard Cohen. At the same time, for her latest album, 'Stockport to Memphis', she has weaved some of these covers into a set of songs she has co-written with jazz composer Simon Wallace. As the title suggests, Stockport is where she's from, Memphis is where she's yet to reach; her witty lyrics encapsulate this kind of deadpan nostalgia and fit perfectly with Wallace's sympathetic but never showy production.

The evening was intimacy itself. Although there are band arrangements on the albums, accompaniment tonight is solely by Wallace on piano and Jungr herself on harmonica - and just as well, since in this tiny space, there are probably only seats for 90 to 100 or so people. We manage to get two in the front row.  Live, Jungr is a disarming presence - between songs, her explanations for how they are written or why she chose to record them are fully fascinating and informative, but also blessed with the timing of a stand-up. During songs, it's of course all about THAT voice, which is full and rich to make you happy enough to hear her sing anything. It proves especially suited to shine a new light on previously 'male' vocals - Neil Young's 'Old Man' is particularly powerful, Jungr remarking that the older you are when you sing it, the more the song's meaning changes. The modest venue meant that stage banter felt like conversation and each song felt like it was being beamed directly to our nerve endings. Jungr's 'jazziness' does not really emerge as improvised 'vocalese' or scat singing - instead it's clear she has a rare kind of versatility, placing notes with absolute precision that you wouldn't necessarily expect but which vary, complement and fit perfectly into the tune. It was a privilege to experience this.

I'll say less about the following night since I've already written about this band earlier on the same tour - but the next gig on our list was Bellowhead. We'd already seen them last year at the Roundhouse - but when a band this brilliant plays literally down the road (Croydon Fairfield Halls this time), it seems churlish not to catch them again. What we'd hoped proved true - they were still fantastic, but this time we were nearer to the stage. We could properly appreciate the beautiful set, as well as enjoy the riotous interplay between the 11 musicians at a close enough vantage point to see their facial expressions (mostly: gleeful) and watch in renewed awe at their virtuosity. There is no sight in folk (or perhaps any) music more thrilling than the entire line-up, all in a row along the front of the stage, blasting a tune out at full tilt. 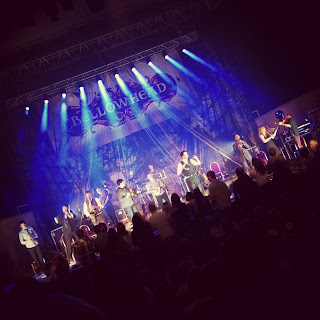 And the night after THAT, the 'folk put through the mangle' theme continued, with Richard Thompson at Shepherd's Bush Empire. I am a Thompson fanatic - so I'm clearly biased and probably incapable of giving a detached opinion. But for all the brilliance of the classic 'Richard & Linda' years and mid-career highlights like 'Amnesia', I think his later/current work is if anything setting even higher standards. I like the fact that he keeps having 'ideas' - not in the sense of concept albums, particularly - although concepts clearly play a part - but in terms of sound. Examples include the all-acoustic 'Front Parlour Ballads', the stripped-down revue '1000 Years of Popular Music' (does what it says on the tin - at least, if you happen to keep it in a tin), or the recent record 'Dream Attic', where he recorded an album's worth of brand new songs live with his up-and-running touring band.

His latest wheeze is to strip his group down to a trio for the album 'Electric' and its accompanying tour. In interviews, he's said that he wanted to try out a kind of 'commando' band who can, it seems, swoop down on festivals and venues for dates at a moment's notice. The record is a fierce thing - plenty of tenderness and regret (wouldn't be an RT album without it) - but more furious soloing and a noticeable 'grooviness'. Thompson says they were trying to create 'folk-funk', and you can hear what he means. It would probably lurch, rather than skip, around a dancefloor, but then, so would I.

I had temporarily forgotten that the word 'trio' is often preceded by 'power', and that is exactly what this marvellous show gave us. Trios like this are not modest or gentle, due to being a band member or two lighter than usual. Instead, the three people that are there, do a lot more, a lot louder. Particular mention should go to drummer Michael Jerome, who is simply explosive. Capable of that very satisfying manoeuvre of getting halfway through a song and suddenly being able to introduce new beats and rhythms on top of what you were already playing, Jerome powers every number to an enthralling climax. (The obligatory 'soloing into infinity' number - tonight 'Hard on Me' from the 'Mock Tudor' album - actually feels like the musicians might only stop when overcome by exhaustion.) He's also a showman - not quite a show-off - but keen to provide eye as well as ear candy, bashing all areas of his kit to kingdom come in a blur of sticks and limbs.

Thompson himself is on chipper form, his usual laconic wit well to the fore ('We'll do those old ones you like later!') but he's clearly enjoying the freedom and flexibility the trio format gives him. Every time I see him, I'm dazzled all over again at what he's capable of on the guitar - it doesn't seem humanly possible - and in this set-up, where he's the only lead instrument, his sheer range in volume, speed and technique is more obvious than ever. In a nod to great trios of the past ('like Peter, Paul & Mary,' RT mutters), they even cover the Hendrix classic 'Hey Joe'. It feels right. Everything else played around it feels at least its equal.

Here's a great track from the new album which we heard during the gig, called 'Good Things Happen To Bad People':


Part 2 of the Specs 'resisting the ageing process' gig frenzy to follow... 8-)