I've talked before about how I'm drawn to extreme music, but so far - live, at any rate - I'd only experienced it as made by recognisable instruments (my recent grindcore expedition, for example). Here I was now at my first 'noise' gig: two acts conjuring up sonic mayhem using machinery alone - Cut Hands, supported by Dalhous.

I wasn't sure what to expect. Photos accompanying live reviews of noise gigs tend to feature folk turning knobs while sweating - and to a certain extent Dalhous fit this stereotype. Mind you, Cafe Oto, while a marvellous venue can on occasion lead a double life as a very large oven. So I can probably guarantee that the entire audience were perspiring just as much as the performers were.

Dalhous gave the impression of being as much a 'project' as a band. Throughout their entire set, they back-projected some fairly full-on footage (looking like 70s vintage) of what looked like a bohemian commune undergoing some kind of collective therapy. The most dramatic moments in the footage coincided with the quieter sections of music, so dialogue snatches became audible without an actual narrative ever emerging. I closed my eyes from time to time to try and focus on just the sound. It's beautiful - the beats slightly fuzzy and fractured, the 'noise' actually quite mellow - whirrs and purrs - as if trying to soothe the troubled minds of the people in the film. Impressive and involving.

One thing Dalhous couldn't hope to do, though, is prepare us for what came next. Cut Hands is a current alias of William Bennett, who pioneered the 'power electronics' genre of noise/extreme music over 30 years ago as founder of the band Whitehouse. Cut Hands honours that legacy, while allowing Bennett - one of the underground's true originals - to create something entirely new, once again. 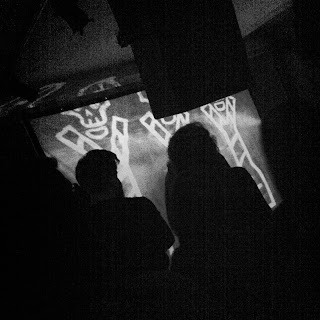 Cut Hands is now two albums old. Nursing a long-held interest in African rhythms and percussion instruments, Bennett has found a way of feeding these beats and drum sounds into his bank of electronics. The result - on CD - is an exhilarating onslaught of pure processed power, channeling polyrhythms back out in layer upon layer, as though you are listening to a ritual from the future. Apart from some almost ambient, intriguing tracks that give you an opportunity to pause for breath without allowing you to lose concentration, the sound is exclusively and relentlessly effects/rhythm-only, which somehow makes the experience at once authentic and synthetic.

Live, I knew I would probably still be happy if Bennett just wired up his favourite tracks to the PA and blasted us into next week - but there was so much more than that to this performance. The Cut Hands aesthetic (the typeface and graphics on the album artwork are carefully controlled and all of a piece) is projected on the screen, interspersed with fragmented black and white film. All the images are hallucinatory and elusive, but they seem to include ritualistic behaviour, alongside other arresting visual loops of hands playing a piano, or blood as if seen under a microscope. I hope you'll forgive me if I didn't actually see all of these things clearly, as there were times when the visual accompaniment consisted mostly of the back of someone's head. In some respects, all gigs really are the same...!

Bennett is at first tucked away behind his equipment stage right. He builds up the intensity of the set steadily and mercilessly. At times, I'm reminded of a DJ - but instead of lining up components with matching 'beats per minute' speeds, Bennett appears to be mixing his own multiple rhythms into a seamless whole. At any given time you could probably hear any number of rhythm tracks, moving at different rates, syncopated in different places, loud and soft at various times, and the end result is always exactly precise. Precise, in fact, to the point where people started to realise how *danceable* the music was, and the Oto crowd began to move and feed back some of Bennett's energy. 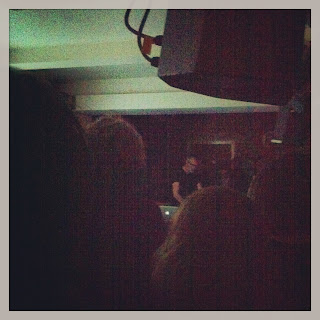 And we are talking proper energy. It soon becomes clear that Bennett is as transported by this music as we are. He soon starts to dance himself, loose-limbed and without inhibitions, yet with at least one fingertip on the laptop, as though it was supplying the electricity to keep him on his toes.

The extreme heat in Cafe Oto keeps us thirsty and I think this must have affected the performers most of all. At various times during the set, Bennett brings his hand to his face, appearing to wipe his dry mouth. Behind him at one point, a celluloid snake crawls across the screen, and Bennett's arm movement matches the elegant winding motion of the reptile in the projection.

Anyone into the noise genre will certainly know Bennett's other work and will decide whether Cut Hands takes them along a road they want to travel. However, if you're the kind of listener who keeps digging out that Real World release with 30 solid minutes of the Drummers of Burundi - then you should definitely investigate. This is aggressively inclusive music. Volume and pitch that might once have punkishly tried to alienate now bring people together to listen, dance and appreciate.
Posted by Adrian at 05:45