Two recent photography exhibitions have got my mind racing. The first showcases the extraordinary body of work of one man, while the other assembles the work of many photographers in one collection (the only link between them - at face value - being where they are from). It's interesting to think of the frenzied invention and wild variety of work in the former, compared with the unity of purpose and feeling in the latter.

The photographer with a show to himself is Man Ray. The huge retrospective at the National Portrait Gallery - called, without too much flamboyant excess, 'Portraits' - was a massive education for me, since I wasn't aware of his work much beyond some famous surrealist images (it's possible that many folk recognise the woman whose back resembles a violin, complete with super-imposed 'f-holes', without knowing who took the photo). But a saunter round this show and you end up convinced that there is nothing he couldn't - and didn't - do.

He wasn't always turning someone into a musical instrument or separating their face from the rest of their head, that's for sure. He had something of the mad scientist in him, developing the 'solarisation' techique, which made his subjects glow in a kind of metallic haze. He had an artist's self-absorption, producing self-portraits in several guises during his career. He also had at least one stroke of monumental good fortune, when Lee Miller forced herself on him as his student and model. Miller was surely the perfect muse for Man Ray - by which I mean, someone who not only brought out the best in him as an artist, but who was an equal collaborator and fully-formed photographic genius in her own right.

Amazing photographs from all of these phases or genres are present and correct. The ones that have stayed with me the longest, however, are somehow quieter. He did not proclaim himself a pioneer with every click of the shutter, and some of his portraits are almost conventional. Closer inspection, however, made me believe that nothing in his photographs is quite frozen - subjects seem to be mid-thought, mid-action, mid-laugh or mid-look. He captures the feeling that the image might be a still point in time, but the photographer and model were moving from the last shot and on to the next. My favourite expression of this is the portrait of Stravinsky, who is shown seated, looking upward. His mind on something else, he scratches his ankle. Everything in the shot is pin-sharp, except his hand, a blur next to the foot. What a grace note.

This picture, which might well whet your appetite, is one of the exhibitions's showstoppers, a portrait of Catherine Deneuve, surrounded by objects and motifs that Man Ray favoured. It's a good marriage of subject and setting - rightly, nothing is going to stop you giving the model your full attention to begin with. Then your eyes 'withdraw', you take in the full vision and wonder what wheels are turning in the mind behind the lens. 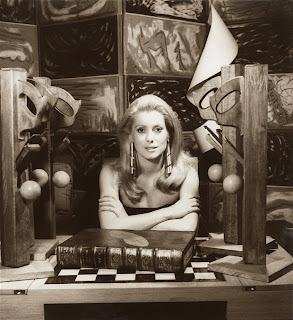 From bohemian glamour to something altogether grittier: 'Light from the Middle East', currently at the V&A, brings together work from (as the blurb says) 30 photographers across 13 countries. All the participants are alive and active, so the work is not in a time capsule - for each photographer, the two or three images we see are in almost all cases part of their ongoing project or statement.

As someone not from the region, I felt a bit wary and ashamed before I entered the exhibition that there might be a high degree, or multiple layers, of political meaning and allegory to much of the work that I would not be qualified to appreciate, at least not fully. And this wariness was partially justified, I think: to give the show a 'story', the artists featured were almost all using their photography to make wider points about faith, identity, and war. (Not really any 'pure' portraiture or landscape views.) Ironically, this had the effect of smoothing the edges off the exhibition, as if there was only one reason for this show to exist - when in fact, there were loads of reasons to enjoy it.

The execution of many of the photos completely knocked me for six. Shadi Ghadirian exhibits portraits that in tone and construction look like vintage, traditional portraits of young Iranian women, but the modern timeframe of the shot is revealed by a giveaway prop (such as a can of pop or a ghetto blaster) that looks totally incongruous in the setting. Ahmed Mater of Saudi Arabia creates images that suggest pilgrims at Mecca but are in fact iron filings around a magnet: 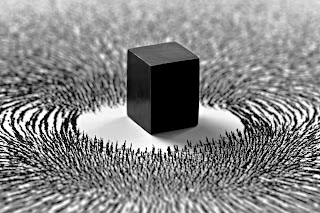 I found much of the exhibition beautiful and intelligent, purely on an aesthetic basis, and I happily took the book home: Tal Sochat's trees, captured outdoors but under indoor conditions (false backdrop, studio lighting, out in the open); Mehraneh Atashi's photo from a men-only gym, constructed as reportage but with her own image carefully reflected in the wrestler's mirror; Hassan Hajjaj's traditional dress portraits reframed as spoof fashion photography. I can see how these photos provoke responses about differing cultural values, repression and segregation, and identity (and the hiding or neutering of it). But before that, they gladdened my eye. As an amateur myself, I left the show fizzing with ideas and techniques that I wanted to try, and generally you can't ask more from an exhibition than that.

Some of the work I found less successful, where the reason for taking the photo overtook the photo itself. One strand of the exhibition features some fairly full-on violence against the pictures themselves: blurred images with deliberate damage wrought on the film, or some highly stylised 'false postcards' of pre-war Beirut with fire and carnage superimposed on the tourist scenes. Equally, a series depicting mothers holding portraits-within-portraits of their lost sons was unbearably poignant, but a particular picture made the entire point in one go, as one of the old women sat with her son's image, framed by bullet holes in the building's exterior. To my shame, I admit - because the photos ARE important - I felt the extension of this into a series risked being exploitative.

Sometimes art and reportage mix perfectly - but not always. Sometimes they are better kept apart.

Picture sources: Man Ray's Catherine Deneuve portrait from the Telegraph interview with CD - read it here. The Mater photograph is taken from the V&A website.
Posted by Adrian at 17:03