After the intense build-up of the first half of the week - and a couple of wholly necessary nights off - it was back into the fray for another pair of concerts. As I looked at the tickets side by side, it struck me how odd it was to be seeing these two groups on consecutive nights. Together they represent probably the only two types of music or band about whom I've had The Worst Rock Conversation - that is, having to defend and argue the case for why I like them, or even justify their very existence.

First up: Rotten Sound, a Finnish grindcore band, here - for one night only! - in the Camden Underworld. For those of you unfamiliar with grindcore, it's heavy metal, played very very loud, and very very fast, with the vocals roared rather than sung. (I know that description could apply to a lot of metal, but if I start going into all the subdivisions and scenes of that particular genre here, you will HATE me.) Hardly anyone I know can believe I'm into this. 'It's just noise,' they say - as if that was a bad thing.

It's just extreme. I am extremely fond of extremes. Grind is not, to my mind, linked that closely to other 'normal' metal (say, Iron Maiden). It's more the metal equivalent of free jazz, or particularly 'banging' hardcore techno. The voice becomes part of the rhythm section, and the tunes - brief and brutal - are in the riffs. Rotten Sound were spectacular - truly ferocious, but not without a kind of groove, resulting in the sea of moshpit die-hards moving in ripples and waves across the confined space. One chap was so overcome, he was shirtless by about song 3, and clambered regularly over the monitor speakers and onto the stage. Used to this kind of lunacy, Rotten Sound just step gingerly around him without missing a beat (which would be very easy at this speed). Then, as each song ends, he beams at them and lowers himself back into the crowd. 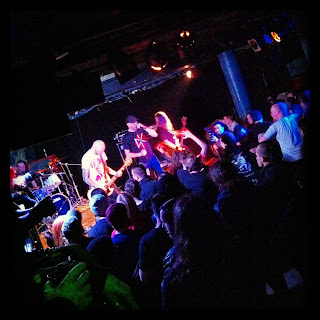 The audience is in fact full of very nice boys and girls. (For a metal gig, a pleasingly high number of women. Mrs Specs still gleefully remembers the only metal concert she accompanied me to - Iron Maiden again - where for once the women had room to set up home and hold flamboyant parties in the Ladies while us blokes were queuing for miles out of the Gents.) Like any other extreme music, it's an outlet for pent-up energy (dance away your frustration!) and between songs and bands - that is, the bits when they're not throwing themselves around with scant regard for health and safety regulations - everyone is incredibly well-mannered. Gig etiquette (so often ignored these days as audiences are quite happy to talk throughout acoustic solo sets and the like) is strictly observed, as pints remain unspilt and views left unobscured.

It does amuse me, though, that almost everyone except me turns up at metal gigs simply looking like they've come straight from the last metal gig. Whereas I, of course, am normally there straight from work. I belatedly realise that my light linen shirt makes me glow like some kind of well-fed lighthouse from my mezzanine vantage point. I begin to think people might mistake me for a mirrorball with glasses on. Luckily, my fears are unfounded, and I slip back into the night with a Rotten Sound t-shirt, making a mental note to change into that, or something similar, next time.

Speaking of mirrorballs and the like, there was a change in gear the following evening when Mrs Specs and I turned up at the O2 to see Girls Aloud. Again, when I rave to some people about Girls Aloud they react as if I should be quietly led to My Own Room and made to think about what I've done. I can only say: listen to the records. Really listen. Some people are resistant to performers who don't write their own material, but I would be wary of being so - some of the greatest music has come to pass because of the division of labour between the backroom boffins who can write amazing tunes, and the confident show-offs who can put them across. (I'm not including classical music here, although perhaps I should, because it 'works' differently.) Think Sinatra, Fitzgerald, Presley ... Motown and the Brill Building ... even *cough* Stock Aitken & Waterman (mostly not my cuppa, this last example, but much of the music has lasted along with everything else - there it is).

'Team Girls Aloud' are a formidable outfit. Pick one of the songs at random and there'll often be a great deal to pick apart. A track like 'The Show', for example, shuffles its constituent parts, working its way through two or three tunes into the chorus, then pinging back out again to how it started. GA had a hit called 'Long Hot Summer', where the two verses were totally different from each other and a completely new tune came in out of nowhere for the outro. Some bands would've made the number of ideas in 'Long Hot Summer' stretch over an EP at least. You don't have to sit by the hi-fi analysing this sort of thing to 'get' it - it's the subtle touches, quirks and anomalies that make truly great pop music, activating something in the brain that makes you go back for repeated listens. 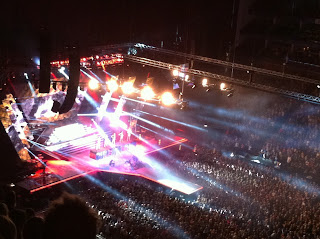 Live, of course, it's all about the girls themselves and they are brilliant. It's easy to forget if you're hoovering to the greatest hits (er, I've heard) that they all have quite distinct vocal/physical personalities: Nadine has the range; Sarah the volume; Kimberley a rich, warm tone (ideally suited to the show-tunes she now performs solo) and Cheryl a kind of R'n'B sass; while Nicola is deployed whenever a hint of vulnerability or 'breathiness' is needed. None of them is in any way a weak link, or needs to be 'carried' by the others at any time. It's to Cheryl's credit that despite her latter-day existence as a kind of stand-alone megastar, she never takes over, courts the crowd's adoration or behaves as anything other than an equal fifth of the group.

An old git like me also spends a bit of time watching the musicians. The GA live sound is very, very good - no coincidence, then, that while there's plenty of synthesiser action, we also get live drums, live bass and live guitar - all clearly audible in the mix. The players don't have the freedom to solo into infinity, of course - on the contrary, the dance routines depend on their performing with military precision - but they provide the unmistakable 'oomph' that you only get when a bunch of separate instruments are wrangling various musical parts into a whole, on the spot in front of you.

We are treated to unashamed spectacle, too. Costume changes, two dancers for each Girl Aloud, and - most impressively - a mobile Girls Aloud logo. Halfway through, the five of them (as daintily as possible) clambered on top of it and flew above the audience to a second platform in the centre of the arena.

I will admit, you don't normally get that at a Rotten Sound gig - far more likely that a fellow member of the crowd will go soaring over your head at any given moment. Fortunately, I make room in my life for both types of evening.