I don't think I could possibly have picked two more contrasting gigs to write up in a single post. Still, always up for a challenge!

First up was folk singer Sam Lee at the Bedford Arms in rock 'n' roll centre of the universe, Balham. I had really enjoyed his set at the Union Chapel supporting Tinariwen and wanted to hear more. I had four opportunities to do so, as - inspired move, this - Lee had arranged a small 'points of the compass tour' (his phrase, not mine) with intimate gigs in North, East, South and West London. Drawn to the brevity of the train journey, like the decrepit relic I am, I went for South.

The support was Gerry Diver, introduced as a master fiddler and (my ears pricked up at this) producer of - among other things - Lee's superb album 'Ground Of Its Own', which was shortlisted for last year's Mercury Prize. As you might expect then, Diver didn't settle for dazzling displays of cascading notes - although there were plenty of those - but also seemed occupied with the variety of sounds he could get out of his instrument. Playing with extraordinary dexterity, speeding up and slowing down the movement of the bow, scraping, sliding and slapping - a full-bodied, full-blooded sound - it really did feel like his tunes were hewn from the soil. A loose strand drifted free from his bow, waving in mid-air like an aerial to the earth. He brought on his own guest musician, Lisa Knapp (they are a Folk Couple!) who strummed Diver's fiddle to sing a beautiful song solo. Reassuringly romantic to know they haven't yet reached the 'separate violin' stage of their relationship.

Sam Lee then played two sets with his Friends, a crack team of traditional musicians, the twist being the wide range of traditions represented: violin, cello, percussion, koto, shruti box (like a small accordion that provides a regular drone) and trumpet. The effect is intoxicating (useful when there's no bar in the Bedford's upstairs room). The percussionist has a light but propulsive touch and the Japanese and Indian elements add drones and hooks for the strings to dance around. Mesmerising. The songs Lee collects and recreates in these unusual arrangements come from the gyspy/traveller community, and I can't help wondering if bringing in these more exotic sounds into English folk gives the tunes an even more nomadic feel - harder to pin down, more involving and attractive. The past is a foreign country after all.

Lee scrupulously observes the convention of explaining who and where the songs come from - and I really admired his determination to still do that when supporting Tinariwen. I feared he might lose the crowd, who were of course not 'his' audience. No such worries here - the Bedford attendees listen to every word. The songs - a mixture of tracks from the album and new (or, looked at another way, old) material - stretch out as we luxuriate in the freedom of a longer set in a smaller room. The only constraint is on Lee's dancing - amused, he tells us that he'd be moving around a lot more if the stage felt a bit less wobbly and fragile. 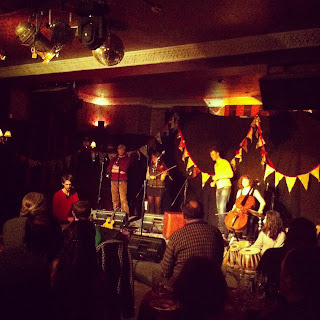 If this is proof, were any needed, that Lee is one of the politest musicians in the industry, I encountered his polar opposites a few nights later.

Step forward the Budos Band. On record, they are fearsomely good, playing an instrumental blend of funk/soul/Afrobeat with seemingly limitless groove and invention. However, there are about ten of them and I surmised they possibly didn't tour very much. Then - hurrah! - I see an advert for a single date at the Islington Assembly Hall.

The Hall itself is a thoroughly civilised place. I have a 'general admission' ticket, and am offered my choice of the seats upstairs or to stand on ground level. Although the band's music is compulsively danceable, something makes me choose upstairs - the chance to get a good look at the group, I suspect. Once up there, it feels very well-appointed. Really comfortable seats in a plush red, the recently-restored venue is so classy it has LADIES and GENTLEMEN in a golden serif font on the wooden loo doors. Correct: this ain't no disco.

When the band appear, they immediately lock in to their signature sound. There are eight of them: three employed solely to hit things (drummer, bongo player, and a jobbing striker of other inanimate objects), plus two horns, organ, guitar and bass. This is definitely the first time I have seen a town hall annexe (admittedly a very handsome one) transformed by sound alone into a filthy funk den. While the tracks demand the group negotiate their twists and turns as one, the members' individual musical personalities begin to emerge. For example, the horn players throw the traditional shuffling shapes you'd expect, but one is far more shambolic than the other and dissolves into a kind of wandered boogie. I particularly warmed to the bassist, who - like me - has slightly lost control of his beard and looks a bit unusual in a hat; but also, he had an endearing habit of playing his bass at a kind of vertical outward angle, as if announcing to his bandmates, 'Look at me! How about that?! I'm playing the bass!' 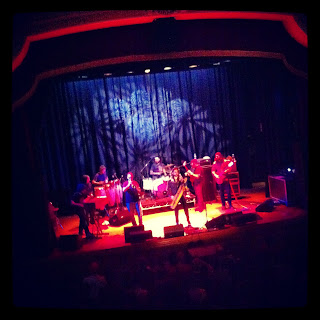 When they weren't playing, however, all hell broke loose. It was actually like watching a cliche of a punk band, increasingly so as the gig progressed. I'm not sure if it's a deliberate reaction or release to playing a style of music that demands such precision and tightness, but at times it was as if they'd been let out for the day. Spraying beer all over the stage (and electrical equipment - could've been interesting), and swearing to, at and, before the encore, WITH the crowd with almost heroic frequency ... it was like the Sex Pistols but with American accents and parping noises.

I think the only other time I've heard the word 'fuck' used more often was in the last Scorcese DVD I watched. I'm not particularly offended by swearing - it's just letters arranged in a particular order, like other words - but as a language-type, I am intrigued by people who do it constantly (that's every other &$£@ing word). It makes me wonder about their vocabulary (or lack of it), manner and social skills. It also made me think about why the band didn't have any lyrics, and why their three albums are called 'The Budos Band', 'The Budos Band II', and 'The Budos Band III'. On reflection, we're quite lucky the CDs aren't called 'Fuck', 'Fuck' and 'Fuck'.

To be honest, with this group, I'm sure it's also something to do with the adrenaline pumping, the desire to feel a bit dangerous, and the need to maintain energy levels (they were clearly jetlagged, too). Since I'm 50% rock gig addict and 50% old fart, I find myself half-pleased, half-appalled. The devil on my shoulder is thinking 'Yes! You don't get enough of this rock 'n' roll attitude anymore', while the angel tuts and reminds me, 'Someone's going to have to clean all that up.'

Delinquency notwithstanding, these deeply talented men are at the top of their game, and when on their best behaviour - that is, whenever they were actually playing - the resulting noise was sinuous and sublime. I would recommend them - the records totally without reservation; live, might be worth leaving your nan at home, unless, on the quiet, she's a bit of a 'grandmotherf__er'... 8-)