Last weekend the musical collided with the political at the Barbican. While the audience were as polite and attentive as ever, there was a sad and controlled anguish - even anger - on stage, and no wonder. Whatever the circumstances, the 'Sahara Soul' concert presented a textbook, dream bill. On the one ticket, we got to see three superb acts from Mali, all arguably at the peak of their powers.

Mali could be seen as an epicentre for 'desert blues', due to the huge popularity of Tinariwen, and acts that have subsequently enjoyed some attention as a result of their breakthrough. My personal favourites are Terakaft, for example - a band I believe are so monumentally, breathtakingly good, I plan to write a proper post about them sooner rather than later. There's also Tamikrest (more of them in a minute), Tartit, Toumast... I should add that not every single one of these bands' names begins with 'T', but it does make it handy when browsing the racks. While we still have racks...

But I digress. The genius of this line-up was how it highlighted the variety in - if there is one - the 'Malian sound'. The first act on was Sidi Toure, a beautifully expressive vocalist with (at face value) perhaps the most traditional instrumentation: all acoustic, guitars and calabash. Calabash - my new favourite word - is the percussion instrument that looks for all the world like a plastic bowl turned upside down, but in skilled hands can seemingly produce at least a drum-kit's worth of booms, beats and clicks. (And the calabash is actually a melon-like vegetable, used to make not only its namesake instrument, but also the African harp-like instrument, the kora, AND the ngoni - see below - AND other types of lute and fiddle. There is nothing the calabash can't do.)

Toure's music was sublimely melodic with a great deal of emphasis on the voice. I was intrigued at how the pace of his set seemed to deliberately pick up; the percussionist produced clattering rhythms that not only buoyed the music up to thrilling heights - but also reminded me, of all things, of glitch or techno. It's interesting to see that Toure is on the Thrill Jockey record label - also home to bands like Tortoise who specialise in this kind of 'warm machine' ambience. He is a fascinating artist, and I came home with his CDs.

Then Tamikrest came on. Quite a contrast. A young Touareg band, they are openly in Tinariwen's debt in both image and sound, but crucially they occasionally do to the 'desert music' what you'd hope and expect from a bunch of upstarts: kick the crap out of it. Weapons in their arsenal include two vocalists (pleasingly, the female voice is the one going on the attack - swooping around the male lead singer's main tune with harmonies one minute, hollers the next) ... and a percussionist who, after putting up with the calabash for only so long, takes his seat behind a drum-kit. All hell breaks loose. As you might expect from a band whose entire musical DNA is seemingly based around mesmerising rhythms, they don't have an 'ordinary' drummer. It's easy to speak in a kind of general, careless way about Western influences impacting African or Asian bands, but Tamikrest's 'small step/great leap' decision to bring in this most 'rock' of elements not only helps them make a thunderous racket, it also increases their alien nature. They don't suddenly sound like they come from down the road. They sound like this elemental desert storm, something that's neither 'over there' nor 'over here'.

I understand the programming of the concert pre-dated latest developments in the bands' home country. While the bands' wishes for the restoration of peace and stability was self-evident, a particularly poignant feature of their current situation is the Islamist ban on music in Northern Mali. Headliners Bassekou Kouyate and his band Ngoni Ba recorded their most recent album as the coup took place, and Kouyate is perhaps the most vocal and upfront performer of the night to speak directly to the audience about the nightmare they all had to go back to. The passion and anger, though, is all there in the music. Most of the band play a ngoni of some form or other - it looks a little bit like a squat cricket bat, with a varying number of strings, and gives a ringing sound that seems to combine the chime and power of an acoustic guitar with the speed and delicacy of a kora - a very appealing mix. Kouyate, however, has invented other versions of it (controversially, it would seem, among some of his traditionalist countrymen) so he can build a full band on the same sound. The bass ngoni brandished by his son is particularly impressive. And Ngoni Ba definitely rock. The instrument may date back to the 14th century (thanks, Wikipedia) but this lot are feeding them through amps and pedals. Kouyate himself seems to favour a furious wah-wah sound, soloing at times with a metallic glee, foot up on the monitor. 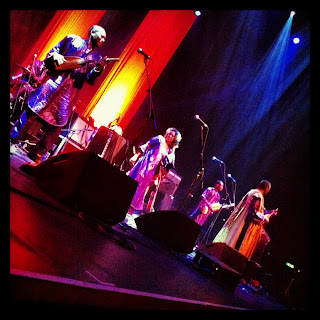 The concert climaxed with all the bands on stage (along with guest singer Rokia Traore), showing a seamless unity that sadly cannot be reflected in the wider arena back home. Hopefully, the beaming smiles on their faces at least meant they temporarily escaped into joy and excitement - their wonderful music certainly ensured we managed that in the audience.

Finally, two links you might find of interest. My friend Maryam, who arranged for us to go to the gig (thanks, MJ!) has now set up a YouTube channel with some great footage, some from this particular night. Please go along, view and support.

And I have not tried to explore in any depth the situation in Mali. I couldn't do it justice in an amateur blog like this, where I mostly deal with musical/cultural stuff I've seen and want to share. If you want to know more, I recommend you visit Andy Morgan's website. Tinariwen's manager in a past life, he now writes full-time and is totally immersed not only in the music and culture of Mali (with work appearing in Songlines and FRoots) but is a natural and diligent chronicler of the ongoing political situation. He gave an eloquent introduction to the bands at the start of the gig. This is a brilliant site.