It's been quite a week for concerts. I'd planned on two, on consecutive Saturdays. The first was an evening of Richard Strauss at the Royal Festival Hall, and the second was the Sahara Soul night at the Barbican. However, in the middle of that, I won tickets out of the blue to see ... wait for it ... Elkie Brooks at the Epsom Playhouse. I know. It simply isn't possible to get more rock 'n' roll than that.

Sahara Soul was incredible, but it was only last night, and I'm going to let it buzz round my head for a bit and write a post about it in a few days' time. For now, rewind....

....To Strauss. This was one of the first concerts in an extraordinary season that the South Bank has lined up to last the whole year, called 'The Rest is Noise'. That title may be familiar to you - it's the name of critic Alex Ross's massive survey of 20th century music, and it's being used as a basis for programming the series. Strauss kicks the book off as a kind of key composer, bridging the gap between the 'old ways' of the 19th century and the shock of the new.

I've mentioned Strauss before as one of my favourite composers, so I was really looking forward to a whole concert's worth. Starting with - what else? - 'Also Sprach Zarathustra' (the suite begins with the short piece Kubrick used to open '2001: A Space Odyssey') ... even massive familiarity or affection for the film, or even a recording, cannot prepare you for hearing this live for the first time. It was like being inside a timpani drum (and the timpani player was probably man of the match throughout the evening - he was like a cross between a maitre d' at a posh restaurant and Animal out of the Muppets). I was overjoyed to note that yet another Strauss concert met its obligation of including percussionist battering merry hell out of some hapless instrument - this time, an enormous hammer was taken at arm's length to a clanging bell. More of this sort of thing. And the piece goes on to fascinate, as that opening theme is picked up in a variety of moods and settings as things progress.

The London Philharmonic Orchestra had to negotiate rapid changes up and down in size throughout the programme so conductor Vladimir Jurowski skilfully and wittily explained some of the background to the pieces during the changeovers, and even interviewed one of the soloists, baritone Thomas Hampson. Hampson had a spectacular voice, retaining a rich enveloping power even when the volume was turned down (the lengthy song 'Notturno').

The maximum intensity of the evening was reserved for soprano Karita Mattila who had shared a set of four songs with Hampson in the first half. Our classical guru David, chumming Mrs Specs and I to the gig, was extremely enthusiastic about these particular songs written early in Strauss's career. (This time, I managed to get him to explain the various changes in the players' positions and options open to the conductor to mess with the sound balance. Basically, I think we need to kidnap David and then hire him out at an obscene profit to other classical novices as an on-the-spot information resource. And sometimes he gets the ice-cream.)

However, at the climax of the evening, Mattila performed the final scene of Strauss's opera 'Salome'. The heady mix of sex, violence, incest and religion in the plot made it a taboo-busting avant-garde shocker in its day. It was quite an experience to see this heart-stopping soprano - acting her role properly, not a hint of 'reining it in' for concert performance - go through all manner of psychotic mood swings in the space of a few minutes, before enacting her exit (which, in the action of the drama, is by way of being crushed to death by soldiers) by collapsing in almost robotic time to the stabs of music, until she finally knelt at the conductor's feet. Majestic stuff.

Fast forward a few days to our surprise visit to see a rather different kind of diva, La Brooks. My penchant for Elkie goes back to my very earliest days of liking music, that golden period where everything and nothing is 'cool', and certain sounds, voices, or melodies just resonate with you and stick, whatever else you get into over time. Elkie Brooks - I suppose in some ways a kind of Kate Bush you couldn't really take home to meet your mother - clearly *cough* aroused some kind of interest in me, but it wasn't just a youthful fascination with wild brunettes. I think it was more that the voice - rich, bluesy, agile - managed to combine warmth with confidence; the kind of voice that would cheerfully take on songs more readily associated with men - 'Fool If You Think It's Over', 'Nights in White Satin', these days she even tackles 'Purple Rain' - and add more power, without ever sacrificing emotional dynamics or tenderness. I'm not saying I appreciated all this when I was about eight; but equally I'm not surprised that I might have picked up on a voice that was welcoming without being weedy.

Epsom Playhouse - fairly local to where I work - can be a useful venue for seeing acts who don't mind touring their arses off, especially jazz for some reason (I've seen Anita Wardell and Stacey Kent there, with tickets to see Barb Jungr in February). I'm not saying it's low-key, but we were in the back row with the soundman. 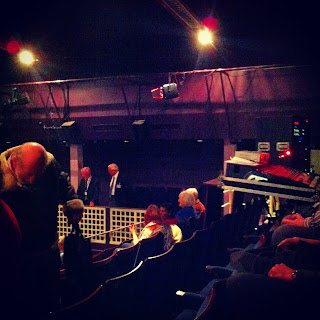 We had a classic Epsom audience in. Mrs Specs and I could well have been the youngest there by some 20 years. I had to queue for the Gents (which seems really odd until you notice everyone else is 85, and cannot conduct their business at speed ultimate), and all the oldsters seemed to know each other, walking in and out of cubicles and exchanging brief random banter, such as "Hello! Eyes down, Maurice!" During the concert, one chap felt like a dance, so wandered distractedly down to the stage, planted himself way over to the left so he didn't impede anyone's view, and started shuffling. About two minutes went by before he gently placed a hand on the stage for support.

Since many of these people had clearly been Elkie fans for about three or four decades, they were absolutely rabid in their support, and she lapped it up. This must be the most old-school gig I've been to in years. Her drummer has played in her band for 27 years, and I imagine his hairstyle has been frozen in the same position for the duration. She clearly mothers her musicians (she lets slip that she is pushing 68 herself) and when she isn't singing, she walks from player to player, as if making sure they're ok.

When she IS singing.... well, the years fall away. It's a masterclass. She can hold notes with little obvious effort for incredible periods of time, and equally can sustain a syllable across several note changes with complete precision and no need to take a breath. We heard more or less all the hits - an amazingly fluent 'Gasoline Alley' and a monumental 'Pearl's a Singer' that included a bit of stand-up in the middle and involved audience participation to Playhouse-quaking levels. The first half was followed by a shorter blues set that really allowed her to let rip. That warm tone I remember from the records is unaltered, but the power of her voice live is almost overwhelming. It was a pleasure to give - and dive - in.
Posted by Adrian at 15:15