Slight feeling of deja vu here - my second post in a row about a photography exhibition that's on the point of closing. This time, it was William Klein & Daido Moriyama at Tate Modern.

Sometimes, I'm a bit wary of this kind of exhibition that flings two or three artists together with the explicit intention of establishing links or mutual influences. It makes me a bit suspicious that the choice of theme or agenda will dictate the works shown to some extent. That didn't apply here, for two reasons:
The exhibition gives a couple of pointers at the start of each man's gallery section. DM is painted very much as a chronicler or documentarian, concerned with capturing the reality of what he saw. WK, on the other hand, is interactive or manipulative: pushing himself into his street scenes so that some of the people react directly to his presence, or setting up artifical situations then photographing them as if they occurred naturally.

Remembering this after I'd finished going round, it suddenly 'unlocked' the show, for me at any rate, and helped me to make sense of what I'd seen. WK is about expanding, developing, enhancing and adding to his photographic art; while DM strives to pare down, reduce, and eliminate.

For example, after his urban beginnings capturing the often seedy and harsh life in Shinjuku, DM goes through a stage of literal street photography, removing signs of animate life and capturing atmospheric images of empty roads, sometimes through his windscreen: 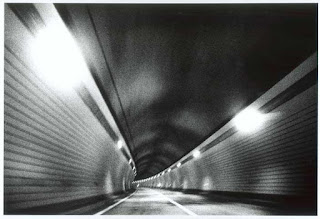 He also conducted experiments to explore light and shade, using extreme close-ups or unusual angles to capture real people or objects as if they were canvases for abstract patterns. I was intrigued by his installation of Polaroids (going around all the walls in a single room) forming a mosaic-picture of his empty studio - think of the cover of the Talking Heads album 'More Songs about Buildings and Food', which uses a similar technique - as if he'd even erased himself.

On the other hand, where DM looks downwards, and even debases, WK seems to look up, and elevate. Alongside his forthright city photography, where he and whole crowds of folk appear to share some heartstopping 'in-your-face' moments, he casts his eye skyward, photographing neon signs, and showing an early affinity for fashion photography - including a justifiably celebrated image where he photographs three fashion models on a roof but multiplies them all several times over with mirrors. Add the breathtaking city skyline behind them and it becomes an even greater feat of composition.

This picture shows one of WK's 'manipulated' situations, where he primed two models to walk over this crossing then photographed them doing so from a distance. The results are sublime - the look one of them gives the other as the moped pushes between them in the right hand panel is priceless. 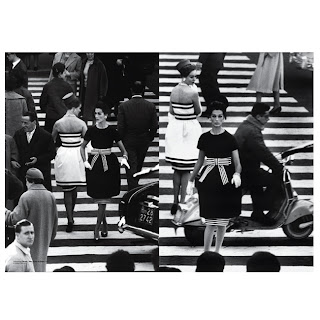 I was also struck by the 'movement' in WK's pictures. You could argue that it's a tried technique, even a cliche, to suggest motion with blur or soft focus but this photo is something else: 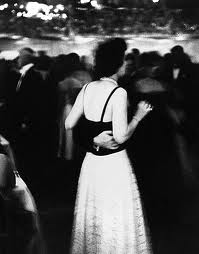 Might be tough to see at this size/resolution, but only the woman's back and the hand of her partner are anything like sharp. She is on the move, so slightly out of focus, but the other revellers in the background are more blurred. As a result, you instantly perceive - without really having to think about it - that everyone is moving at different speeds. Brilliant.

WK went on to make more and more additions to his art. Experimenting with special effects and graphic design (and I confess I've not really touched here on the graphic or film work, but it's all represented) he combined these techniques into his photos - often going back and re-using old images. In his further fashion work, he introduced surreal elements to make his models caress or rest on flashes or beams of light. More recently, he made his photography into a kind of pop art by enlarging images to enormous proportions and painting on colour marks so they look like gigantic, alien contact sheets. He even took his own influences from abstract art - Mondrian as represented in the exhibition - but unlike DM, instead of making his own photos abstract, he brought Mondrian-style lines and boxes to bear on how he composed a group of houses/windows.

Of the two, I preferred WK - simply because I found his composition and subjects more pleasing. But they are worthy companions. Lots of ideas and techniques to make an amateur's head whirl.

(Thanks to Mark Bader for recommending this exhibition to me. You can find his fascinating blog here.)

Picture sources: I found the images just using Google from -