Bitter Ruin. Any regular readers of this blog (thank you, darlings, thank you) might remember the name - I last raved about this duo here, after seeing them support Ben Folds Five at Brixton Academy. I was so dazzled by them I went home with their record bundle - literally, CDs fastened together with a rubber band: old school - and booked a ticket for this, their follow-up London headline gig, at the Borderline.

If I'm still high on the experience 24 hours later, then fine. But I genuinely believe they are one of the best live bands I've ever seen. The records are good - very, very good - but on stage they get the sound exactly right, almost in passing, it seems, until you realise the practice and precision that goes into making such intricate noise with only one guitar and two voices. On top of all that, though - is the spectacle.

First things first. What kind of music is it? Good question, glad you asked. It defies any kind of exact genre placing, including elements of flamenco, folk, Americana, even opera. But there is an overlay of cabaret and - not exactly dance - but choreographed movement, and skilled acting that sees the pair inhabit the songs and play out the four-minute (melo)dramas like a couple doomed to split up over and over again without ever getting back together.

Their names are Georgia and Ben. Georgia has an astounding vocal range - not just in terms of reaching highs and lows, but also the dynamics: crystal clear diction whether holding onto epic notes, or tearing through her lines at warp speed, her song's character in the throes of some broken-hearted madness. Ben is the perfect foil, vocally, crooning when necessary beneath Georgia's acrobatics, then launching a stealth attack on some numbers when he leaps into her range and matches her frantic delivery. He also belongs to that rare breed of acoustic guitarists who can play with so much variety and volume on the instrument that you don't think about the lack of a full band for a second. And on this form, I can only imagine it would be a distraction.

Because, as they are, right now, their show fizzes with chemistry and action. Ben is occasionally seated and static due to the guitar, but even this is worked into the flow of the performance. The less Ben moves, the more Georgia stalks the stage, prowling round him as if poised to strike. Their timing is impeccable; the first time Ben gets to throw some serious shapes is during 'Trust', a mind-melting calling card of a song dropped into the setlist like a time bomb. The intensity of the argument between the lovers in the lyric is such that they almost reach the point of alternating syllables - as the song reaches fever pitch, they career about the stage, in each other's faces... The overall effect is like two human weather fronts meeting, and we get to hear the storm.

The duo are also aware that stillness can provide just as powerful an impact. Again, there's a lot of visual awareness: songs are performed seated, back to back, or directly facing each other, as if the audience weren't there. One of their most powerful tracks, 'Child In A Seacave', sees them both on their feet, but rooted to the spot: Georgia carrying the virtuoso vocal, and Ben (singing only for a short harmony section), remaining completely static, his eyes not leaving her apart from the occasional glance downwards to nail a nasty chord.

Musically, they are out there on their own, but in some respects they make me think fondly of certain other duos who have nestled snugly in my pantheon of favourite bands: their intense rapport recalls the White Stripes; their easy banter, such a contrast to their in-song personas, will ring bells for Handsome Family fans; and their pushing at the boundaries of what can be expected from both acoustic music and the human voice might appeal to lovers of Dead Can Dance (at certain periods in that band's long history, anyway). Don't think for a minute that Bitter Ruin 'sound' like these groups - they don't sound quite like anyone else at all. What I'm getting at is that at the top of their game, they share the same dynamic exclusive, it seems, to the very best male/female partnerships, and fully deserve a place alongside them.

So much the better that the music - and whole image, package, the lot - they create is so original, personal, and successful. Visit the website, check out the photography and videos alongside the music and you'll see just how well thought out and realised the Bitter Ruin universe is. And more importantly, for heaven's sake buy the CDs and catch them live. Or you might find they come after you..... 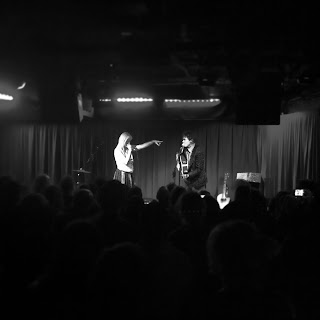