While the Proms are still going strong, I’ve now bowed out, unable to get to any more of the concerts before the close of this year’s season. I made it to six gigs altogether – very happy with that – although at the same time I’m aware that it’s just a tiny fraction of what the festival as a whole has to offer.

I started the whole shebang off with a stone-cold classic, Beethoven's 'Fidelio'. I sometimes think I might be a bit odd in that I'm actually a little ambivalent about the work itself... famously, it's Beethoven's only opera, and I can't quite shake the feeling that his heart wasn't quite in it. As a consequence, I thought it both benefited and suffered from being a concert-only staging. Musically, it was a grand performance with stunning soloists: Stuart Skelton's opening 'Go-o-o-o-o-ott!' will, I imagine, be many attendees' single most breathtaking 2017 Proms moment. Louise Alder and Benjamin Hulett gave sensitively-pitched, endearing renditions of should-be lovers Marzelline and Jaquino. However, this type of production can raise certain questions - What does 'concert performance' really mean, compared with, say, 'semi-staged'? What level of acting or interacting do we expect? And is everyone doing the same thing?

Often, thanks to quality of performance, these are non-issues, but I did find myself thinking about them during this 'Fidelio' - even a potentially daft point like Leonore (the superb Ricarda Merbeth) - wearing a concert dress throughout. It might be only a concert performance but in an opera that totally depends on everyone thinking that Leonore's a man, it actually looked a bit ridiculous and rendered some exchanges nonsensical. A trouser suit - or even the same shirt/jacket combo worn by the men - might've been a neat touch. (Caveat: please note this is not a comment on any performer's looks or dress sense, and I'm fully aware, too, that opera doesn't depend on realism. This is just a point about a decision to do with stylistic direction/presentation that struck me as ill-thought-out.)

Even within my handful of Proms, I managed to sample some quite ‘extreme’ experiences. Two of these were presentations of vocal works written on such a vast scale that they don’t tend to come around too often, and when they do, it’s quite handy to have a venue the size of the Royal Albert Hall to put them in. For once – or, indeed, twice – the Hall’s famously volatile acoustic can simply be close-packed with curved-wall-to-curved-wall surround sound.

The first was Mussorgsky’s opera ‘Khovanshchina’. While ‘Boris Godunov’ remains the better-known, popular choice, this later work was an attempt at a kind of monumental national/political artwork: it centres on the pockets of society resisting Peter the Great’s reforms in 17th-century Russia, culminating in the horrific self-sacrifice of the Orthodox ‘Old Believers’ at the opera’s close. The composer never finished the opera, but after Rimsky-Korsakov resurrected and staged it, Shostakovich re-modelled the orchestration – and nowhere is this more apparent than in the terrifying finale. (Flirting with – but, in my opinion, just about conquering – naffness, the production’s only lighting effect came at the end, where the sacrificial funeral pyre was evoked by the entire Hall flickering with intense orange and red. This could have been terrible, but it was so unexpected, and so in sync with the hellish build of the music, that it worked brilliantly. Imagine being made to feel hotter in the Albert Hall. Exactly.)

Despite the opera’s wide canvas, some powerful performances from the soloists really hit home for me, primarily Ain Anger’s Dosifey and Elena Maximova’s uncompromising yet utterly moving Marfa. But the sheer scale – and the variety and quality of the choral writing, brought to life here by no less than four choirs – just made me happily surrender. 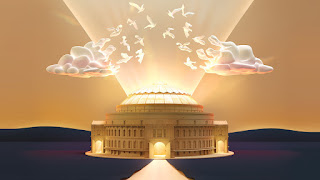 And staying with choral enormity, it was an extraordinary thrill to hear Schoenberg’s ‘Gurrelieder’ live. This Prom was magnetically attractive for a number of reasons: again, the chance to hear a seldom-performed work, but it was also this year’s ‘Rattle Prom’, with Sir Simon conducting his future charges, the London Symphony Orchestra and more or less guaranteeing the kind of atmosphere that comes with a sell-out gig. The London Symphony Chorus were just one of three troupes of singers this time round. But for all the amassed power and glory, this time round the soloists really had it.

'Gurrelieder' has quite an odd structure. There is, at least to start with, a plot: the king Waldemar falls for the maiden Tove - but the jealous queen has other ideas, arranging for Tove's murder. Waldemar curses God - bad move, generally - and in doing so, dooms himself and his men, after death, to hunt ceaselessly during the night rather than rest in peace. However, with sunrise comes renewal. Technically, the work is called a cantata - but it started life as a song cycle, and the opening exchanges between the romantic leads are in effect a sequence of orchestral lieder. Then it mutates into a kind of aria/recitative form as the Wood-Dove reports on Tove's death, and Waldemar sings his curse. These two sections are a bit like a pivot, after which the work broadens further in scope. The night-time hunt is given life by two cameos from a scared Peasant and disgruntled Fool, and heft from the male chorus, until ultimately the full choir take over to welcome the morning sun.

The effect of this is to create a story where the characters don't, to all intents and purposes, interact. The soloists each have the chance to create their own small universe in the spotlight, and what a mighty cast we had here, doing just that. The two leads, Simon O'Neill and Eva-Marie Westbroek, both gave heart-rending and passionate accounts of their characters. But I felt particularly lucky in that certain singers I really admire (largely from seeing them give great performances at English National Opera) were part of the supporting cast: mezzo Karen Cargill's gorgeously sorrowful Wood-Dove, Christopher Purves's mighty bass personifying the Peasant's boom and doom, and the fantastic Peter Hoare's searing tenor, perfect for the Fool's understandable mix of lunacy and resentment. Baritone Thomas Quasthoff (now mostly retired from classical song) rounded out the line-up in the Speaker role at the end, effortlessly proclaiming above the orchestra, even in a role without actual notes!

At the other extreme, it won't surprise regular Specs readers (thank you, darlings, thank you) to find that I managed to get to an art song Prom - the 6th in the sequence of chamber Proms held on Monday lunchtimes at Cadogan Hall. I was actually surprised to find that this was soprano Christiane Karg's Proms debut - not the case, of course, for her marvellous accompanist Malcolm Martineau. Together, the pair gave a scintillating programme of mostly French mélodies, but with an outwards glance towards the exotic: it was exciting to hear Castillian songs by Guridi (take note: it is possible to break the heart by means of a song with the opening line, 'I don't want your hazelnuts') - and Schéhérazade songs not from Ravel but Koechlin. More familiar but no less welcome were songs by Duparc, Ravel, Hahn and, bringing matters to a lush yet laconic close, Poulenc. It's hard to praise this programme and performance too highly - perhaps the best word is 'immaculate': CK married a pristine tone with superbly judged acting and movement, and MM just inhabits this material - in the opening Duparc, it felt almost like he was simply breathing the notes, caressing them into existence.

In perhaps a rare Schéhérazade double, I did get to hear Ravel's song suite this year too, as part of an inventive programme concocted by conductor Esa-Pekka Salonen for the Philharmonia Orchestra and Voices. It's perhaps significant that Salonen himself writes music, as all three parts of the concert seem to represent in their own way the composers acknowledging earlier influences - Stravinsky's 'Canonic Variations' based on the Bach cantata 'Vom Himmel hoch, da komm' ich her'; Ravel's Schéhérazade songs nodding towards Rimsky-Korsakov; and John Adams citing Bruckner as one of the inspirations for the evening's main event (given the ongoing celebrations for Adams's 70th birthday year) 'Naïve and Sentimental Music'.

I had a wonderful time at this concert. I love John Adams's music (that piece was the reason I went) and to watch and hear orchestras weave those cascading patterns across each other never loses its appeal to me. Add to this the joy of discovering a new (to me) singer, Marianne Crebassa, who sang the Ravel with maximum gorgeousness: very pleased to read of her upcoming CD of French song, which will include the voice/piano version of the suite.

Finally, an absolute personal highlight of the season for me will always be the 'Passages' Late Night Prom - the first ever live performance of the original 1990 album made by Ravi Shankar and Philip Glass. Clearly this has me written all over it ('minimalist' classical, especially Glass, world music, exploration of musical patterns/repetitions - you name it), and it was everything I hoped it would be. Anoushka Shankar (a sitar virtuoso in her own right, but - as Ravi's daughter - with a personal as well as professional affinity for the music) led her ensemble of Indian classical musicians but joined the terrific Britten Sinfonia under the overall director of conductor and Glass specialist Karen Kamansek. As if I didn't have enough good vibes about this gig already, KK had conducted the astonishing recent ENO production of 'Akhnaten' - what better recommendation?

'World music' is, ironically, a 'Western' genre: the music itself was already out there in the world, of course, but a kind of UK/US 'gathering of thought' promoting, accepting and adopting music from other cultures is perhaps most easily understood as a late-80s/early-90s rock phenomenon: Paul Simon's 'Graceland', Peter Gabriel's Real World record label and establishment of WOMAD, the globe-encompassing indie of Dead Can Dance, John Peel's embrace of African bands on his show... these are examples that come initially to mind. But it's a wholly unsatisfactory summary (missing out, for instance, George Harrison's fusion efforts as long ago as 'Sgt Pepper', or the way punk-era bands like the Clash and the Police reached out musically to reggae).

'Passages' could be said to belong in the vanguard of any such world music movement, but in fact, to me it seems to occupy its own space. Rather than 'adopt' a sound, the two composers seem to be saying: this common ground already exists, and here is how we find it. It's interesting to me that even the title, 'Passages', suggests linkages, correspondences - not simply a 'journey' from one sound to another. It's not 'fusion', as in an attempt to make a connection - more a statement of recognition that despite wildly variant approaches (the musicians on the original record were working with completely different systems of notation, and KK had to re-arrange the cycle accordingly to reconstruct the album live), you can arrive at a complete musical synthesis, as if the notes are already there, just waiting for you to arrive from separate starting points.

The joy of performing this work was written all over the faces of the musicians. The Britten Sinfonia played with astonishing precision and discipline, yet looked like they were having the time of their lives. Controlling the patterns and rhythms, keeping the motor steady while accommodating awe-inspiring soloing from AS and her group, KK kept her own movement minimal - almost a human metronome, communicating as much with glances and signals as with the baton. For a late-night Prom, this was absolutely packed - a pleasingly diverse audience for a piece of music that emphasises our points of communion, our closeness.

All Proms are broadcast live on BBC Radio 3, then remain on iPlayer for 30 days. Here are the links (where possible) to the concerts I've written about above. Unfortunately, 'Fidelio' has already gone - some of these only have a few days left, so please make haste!