As I type, the 2017 Proms have just under a week left to run. But one feature of the season has already come to an end: the BBC show ‘Proms Extra’, which broadcasts each Saturday evening throughout the festival, apart from on the ‘Last Night’ itself.

Yesterday evening, then, was its final episode for this year. Hosted by Prombassador-in-chief Katie Derham, the programme aims to round up highlights from the previous week’s concerts and trail the treats still to come. There’s a routine: three guest musicians occupy the couch each week and, under KD’s conversational baton, add their thoughts and reflections. One of them gamely performs at the end to play or sing the show out. Some vox pops from the Prommers often feature, and David Owen Norris (a renowned UK composer-performer, here in genial boffin mode) has a ‘Chord of the Week’ spot where he explains a particular motif or technique used by one of the composers featured.

So, it’s partly a music programme… partly a television magazine… partly a chat show. Some of it is unashamedly educational, even academic – before flirting with ‘reality TV’ five minutes later. As a result of this raggle-taggle remit, it can sometimes feel a little odd. Every now and then, it also has to cope with the occasional guest ‘mismatch’. To take last night’s episode as an example, the three guests were saxophonist Jess Gillam, pianist Stephen Hough and percussionist Dame Evelyn Glennie. SH – who is very loyal to the programme and always great value – found himself being asked about Bach (a composer he has chosen not to play so far), along with jazz and soul music – thanks to the Swing No End and Stax Proms appearing on the week’s agenda. He was courteous and responsive but, to his credit, completely upfront about not being able to offer much expert comment. JG, on the other hand, was ideally placed to do so.

But ‘Proms Extra’ can bring out the best in its guests too. Sometimes it gets the timing exactly right: Anoushka Shankar joined the programme a few days after performing the ‘Passages’ Prom and to all intents and purposes, it seemed as if she was still buzzing from it. Also, the sofa conversations can run into brilliant tangents as the musicians find some fertile common ground (fellow viewers may remember the terrific combination of opera singers Ailish Tynan and Stuart Skelton with gospel performer Ken Burton earlier in the season).

I’m writing about ‘Proms Extra’ because I want to revisit a thought I'd already had back in the mists of time. Why is there only a show like this during the Proms? In this article so far, I’ve examined the format in some detail, teasing out the bits where I think it falters slightly – and they’re all extremely minor. It’s 90% a completely brilliant show. It’s a cosy, relaxing watch – but by that, I simply mean it’s pleasant, which in this age of rolling news, shows based entirely on people judging other people and apparently endless fictional Scandinavian murders, is a Good Thing. There’s nothing cosy or relaxing about the music it sometimes features, or the levels of insight some of the more academically-minded visitors offer. KD is extremely deft, not only at managing the interplay between the guests, but at pitching the questions at a level where all viewers can feel she might be asking on their behalf.

(I once read a nasty insult aimed at KD on Twitter, from a very famous, extremely high-minded author. It had been carefully crafted for maximum rudeness in the space available – the writer channelling all his talents purely in the service of being hurtful. What a waste. Not only a horrible thing to do – but he had clearly never understood, for all his abilities, that there are many different forms of wordcraft. To phrase questions, steer responses, improvise and guide the conversational flow, to time, while holding viewer/listener interest – these are among the arts’ quieter skills, and we’d very much notice if people like KD didn’t possess them.) 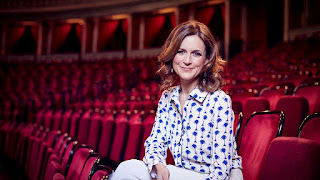 But if there’s an audience for this programme during the Proms – why wouldn’t there be one during the rest of the year, when we’re bereft of actual Prom concerts? Clearly, the name would have to change to remain sensible, but can BBC2 or BBC4 not find a home for a ‘BBC Radio 3’-style show once a week?

It used to be thought by some that music on TV no longer really works. This is mainly a complaint from the rock world – since the charts don’t matter in the way they used to, ‘Top of the Pops’ and ‘The Chart Show’ lost the backbone of their formats, and disappeared. ‘Later’ is almost the sole remaining programme devoted to showcasing music in performance. Because it brings a deliberately diverse range of artists into the studio, who all play live, it sidesteps the need to reflect record sales, but instead focuses on old-fashioned musicianship, with a definite bias towards we – perhaps longer-toothed – viewers who still cherish quite retro ideas like ‘chops’ and, even, ‘albums’.

I suspect it’s the same audience BBC4 now targets with its Friday night music programming, which is heavily based on documentaries and nostalgia. As us rock fans get old and start drowning beneath our vinyl and box-set reissues, it becomes clear that we are potentially more interested in the older music we love being expertly curated, than in hearing new stuff. A curious recent phenomenon is the onslaught of official releases of concerts and radio broadcasts by major pop/rock artists (not on their home record labels, as a rule), a kind of legitimised product to displace bootlegs… in this thirst to compare and collect different versions and recordings of the same music, how oddly like the classical music consumer the rock fan is becoming…

In his recent book ‘Uncommon People’ (which I found a witty and compelling read), David Hepworth talks about contributing factors like the lack of mystique – thanks to the internet – and dwindling desire for physical product helping to kill off the ‘rock star’ as a breed. Instead, he refers to ‘mayfly’ pop stars thrown up into the firmament by talent shows, here one year, gone the next.

So, we’re actually kidding ourselves to think that the age of music telly has passed – in the pop world, it’s just been flipped over. Instead of the hit records providing the meat of the reactive TV show, the TV show provides the hit records. If we accept that television now has this power, imagine the shot in the arm a classical music show could give the genre, even with a fraction of the ‘X Factor’s reach. (And other arts programming is getting a look-in, too. I read recently in the Radio Times that BBC Radio 4’s ‘Front Row’ has been given a TV version. I’m sure that will be great, but it won’t fill a music-shaped gap in the schedule anytime soon.)

A ‘3 On TV’ show would have an enormous amount going for it. I appreciate that with no TV footage from Proms concerts to include, more of it will rely on guests willing to perform live, but that could attract some of the ‘Later’ audience, so it’s worth doing. Also, the media teams already take cameras into radio studios: anyone following stations on Twitter will be used to photos of the musicians rehearsing or performing – and sometimes video footage too. Why note record and broadcast more of those takes?

Radio 3 already has relationships with brilliant venues in place – obviously, London is my patch so I instantly think of so many ‘Opera on 3’ episodes coming from the Royal Opera House, or the regular lunchtime broadcasts from Wigmore Hall. But it goes nationwide, broadcasting music from all the UK’s major orchestras, venues and companies. The weekly show could, exactly as ‘Proms Extra’ does, play highlights from the previous week (which listeners would find in full on iPlayer) and flag the best bits to come.

Some of the structural wrinkles could be ironed out by reflecting Radio 3 programming – for example, there would be opportunities to feature more esoteric/exotic fare under a ‘Late Junction’ banner, and ‘Jazz on 3’ would also be represented. Live-in-studio chamber and song performance – with interviews – would very much mirror ‘In Tune’ … and the brilliant Donald Macleod could discuss a ‘Composer (rather than Chord!) of the Week’.

I realise this is a pipedream… but at the same time: why not? Why could it not be done? And can we do anything to get things started?
Posted by Adrian at 15:16