Paintbox: Pink Floyd at the V&A

Spoiler Alert: If you're a Pink Floyd fan in London's orbit, you probably know about the V&A PF exhibition and you won't need any persuading from me that you should go. Of course you should - in many ways, it's glorious and utterly epic in scope. However, I do talk below about the 'hang', for want of a better word - the way the show is put together, and a few of the surprises (positive and negative) in store. So - if you've not seen it yet and want a totally 'fresh' experience, please stop reading here, with my blessing. Maybe come back after you've been, though, and see if you agree with me.

London's Victoria & Albert Museum describes itself as 'the world's leading museum of art and design'. A bold claim, but one that sums up very well the V&A's seemingly roving brief to highlight those areas where art and design meet, and somehow capture that tension in its historical and cultural context. I've lost count of the brilliant exhibitions I've seen there that I would never expect to find anywhere else - from Middle Eastern contemporary photography to aesthetics during the Cold War.

In 2013, the V&A mounted the extraordinary 'David Bowie is...' - a monumental survey of the Starman's career, told mostly through album art, costumes, memorabilia and, of course, music. The audio guides worked through magic* (*possibly not actual magic) that allowed them to 'pick up' an appropriate number from Bowie's vast catalogue to soundtrack whatever exhibit you were looking at. A self-curating, sympathetic playlist: Sound and Vision.

Now, it feels as if we might be witnessing the creation of a formula. 'Pink Floyd: Their Mortal Remains' is an equally huge crowd-magnet of an exhibition that works in a very similar way to its Bowie-based ancestor. So much so, in fact, that I found it impossible not to make comparisons between the two as I walked round.

What makes some musicians, for example, appropriate subject matter for an art exhibition in the first place? Their key skills are normally more evident on record or on stage. The V&A's interest in Bowie and Floyd - apart from getting trillions of people through the doors - is surely that both acts took control of visual media to enhance their artistic statements. But with very different aims.

Bowie - a solo artist - was so often his own canvas. He seemed to absorb his artistic interests into himself, moving through a succession of identities, wearing and personifying his music. This may of course have been a way of concealing his 'true' self, but he was not in hiding - some part of him was clearly flamboyant, confident and in-your-face. Pink Floyd couldn't be more different: to me, it seems they've always wanted to vanish - and their groundbreaking visuals, from which they themselves were almost always absent - allowed them to do this. (The only two albums I can immediately think of where they featured on the cover are 'The Piper at the Gates of Dawn', where they are distorted through a lens, and 'Ummagumma', where they feature in an optical illusion.)

In their early days, their live gigs featured a light show - and the first room we see plunges us into darkness save for some swirling shapes and projections, an array of posters and fliers displayed around us. Then, as we move on, the exhibition begins to take on its slightly odd shape - mirroring the band's slightly oddly-shaped career. It's in two halves, I would say: a relatively low-key, muso-friendly approach takes us up to 'The Dark Side of the Moon', when broadly speaking they were making albums as we would understand the term (however weird and wonderful). Then, with 'Wish You Were Here' as a kind of pivot, we suddenly move into Concept Floyd and the show explodes into sensory overload accordingly.

My favourite Floyd album is 'Meddle', so my heart really belongs in that first section of the exhibition: more geek than freak. With early singles pouring into my ears ('Point Me At the Sky'! Bliss!), there was one display case after another to gladden the eyes. Each album had its own nook or cranny (I'll come back to this), with relevant photos and sleeve art - not to mention a generous number of guitars - to advertise its merits and memories. It felt a bit dreamlike, as if one could walk through the pages of a scrapbook. 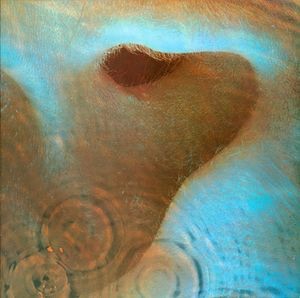 Around the 'Dark Side' / 'Wish You Were Here' era, the rooms suddenly get larger. One gloriously indulgent display of instruments steps outside the chronology slightly (is it wrong to covet the drums with the hammers from 'The Wall' on them?) and introduces some interactivity, with the opportunity to mess around with the mix of 'Money' so you can fade the individual parts in and out. I would've liked a bit more of that, with some of the spacier songs. Mind you, if you'd stuck me in front of a bunch of faders and let me loose on something like 'Echoes', I'd never have left.

After 'Wish You Were Here', the show pulls off perhaps its most shamelessly engineered but, all the same, rather great visual coup. You go through a small corridor where the angle is such that it's impossible to really see what must be in the next, much larger room. Once you pass through and turn to your left, you're unlikely to be ready for a truly colossal space that feels almost aircraft-hangar like in its enormity - and in it, there's a replica of part of Battersea Power Station (the 'Animals' cover art), alongside 'The Wall' itself and, most terrifyingly of all, the Teacher from that album and film, looming malevolently with his trademark headlamp eyes. This whole section has a certain flawed magnificence - for all the ambition surrounding the 'flying inflatable pig' Animals shoot, the part of the story that stays with you is the plastic porker freeing itself from its tethers and floating off into the nearest flightpath. 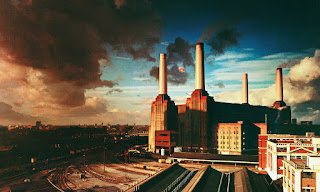 The rest of the show struggles a little to live up to this. Poignantly for the diehard fan, the Wall-building more or less symbolises the collapse of the classic line-up. The great disappearing band - represented so often visually by Storm Thorgerson's ceaselessly inventive sleeve art - were finally at the point of alienating themselves from each other.

Eventually, Pink Floyd soldiered on for some years without Roger Waters and produced some great work - but things had inevitably changed. It's jarring to see a black and white David Bailey publicity shot of the band - how can such a great photo seem so ordinary? And as if Team Floyd sensed something really vital was missing, the sleeve concepts for albums like 'A Momentary Lapse of Reason' and 'The Division Bell', and the use in concert of the circular screen showing constant animations and footage, became ever more grandiose. The rooms here are a little large for what there is to show in them - it's tempting to feel this captures the slightly more empty experience of Floyd without Waters's teeming, cynical imagination to rough up David Gilmour's more natural melodicism, and Richard Wright's and Nick Mason's smooth musicianship.

I feel like I've been quite critical of this exhibition, when I don't really mean to be. It was terrific fun, wonderfully indulgent for a Floyd fan, and you will simply be presented with one brilliant reason after another to celebrate such a wilful, strange and yet completely successful and - ironically for committed shadow-loiterers - communicative group.

I do have reservations. The V&A often seem to shoot themselves in the foot with the layout of exhibitions like this. I went on what I hoped would be a relatively quiet weekday and it was still absolutely mobbed, resulting in bottlenecks throughout the entire early part of the exhibition. 'Dark Side of the Moon' has a glass display case - obviously an exhibit of MASS interest - in a dead end of sorts, meaning that no-one could get a look at it until the bunch of folk before them had finished - yet each group were forced into blocking the other's ability to move out and around. This seems odd given how unnecessarily huge some of the spaces were later on - for example, a huge video room containing, well, nothing at all. Also, the initial room with the swirling light show was in fact so dark, it was impossible to look properly at all the art on the walls.

And one very specific point, simply because I was a little baffled by it. The Pink Floyd story is, in places, a truly sad one. Their first frontman, Syd Barrett, departed the band after succumbing to psychedelic drugs, or mental illness, or both: eventually, he withdrew from the public eye (and died in 2006). When the band fractured, it seemed like relations between Gilmour and Waters were so acrimonious that there could be no hope of reconciliation - emphasised when the 80s model of the band carried on without him. And the story now seems over for good, with the death of Wright in 2008. But - unless I overlooked something - the exhibition completely overlooks one of the most joyful episodes (for the fans, anyway) in their entire career: when the four-piece did in fact re-unite for the Live8 gig. It was a great set, and there was something honest about it - clearly not entirely comfortable, they all must have felt that the cause was bigger than them, and played a blinder accordingly. Even if everything had been sweetness and light, I don't think anyone expected some kind of permanent reunion - their subsequent careers showed that Waters and Gilmour had genuinely moved apart artistically. But as a thrilling gesture and possibly the only time that the band acknowledged that all people wanted - finally - was to see them, the blokes, play together - no concept, no artifice... it's a hard moment to beat. I missed being reminded of it.

[** EDIT ** - It turns out I did miss something! There is a video presentation right at the end (which I only managed to catch a small part of - it was packed) which I'm reliably informed features footage of the Live8 performance. This is excellent news, and makes much more sense. However, please bear in mind that I noticed nothing whatsoever signposting the fact the video included Live8, or making anything of the reunion performance at all - which in itself seems a little odd to me. All the same - if you go, that's where the Live8 reference is lurking. Thank you to Twitter pal John for letting me know - much appreciated.]

But all in all, I was reminded of so much else - which is why, despite my 'issues', I'm recommending the exhibition. Pink Floyd are one of that breed of groups who enjoyed universe-conquering success while still remaining heroically strange. This show allows you to wallow not just in their unique music, but in the arty, surreal world they created, that conveniently existed in its own right, alongside the songs. Casual listeners, proceed with caution, but proceed nonetheless. Floyd fans - you've probably been already.