I realise this is more of a catch-up than a write-up - life has been somewhat frantic lately, and I'm aware that I've managed to see and hear some superb stuff recently that I simply won't be able to write about. Not ideal. In particular, I made it to some wonderful recitals in the closing weeks of Wigmore Hall's season - not least their 'Serenade to Music' gala evening, which literally filled their stage to the point of near-collapse with art-song champions.

But one gig, in the last week of July, was sky-scraping, next-level stuff. It will surprise absolutely no-one who reads Specs regularly that the performers were soprano Carolyn Sampson and pianist Joseph Middleton. Apart, both are heroic: CS has a range of recent performances and recordings that earned her a nomination for Gramophone's 2017 Artist of the Year (I wrote more about this here)... While JM recently won the Royal Philharmonic Society' Young Artist Award, and features on some brilliant recent recital discs with Ruby Hughes and Louise Alder, alongside his group projects the Myrthen Ensemble, and the team assembled for a terrific disc of Britten's Purcell realisations.

But together, I think they're a textbook dream team. They're assembling a fine body of work rapidly and unerringly, with a real sense of purpose. Inquisitive and versatile programmers, the duo's approach to recital sets and releases tips its hat to the way albums are structured. (I'm sure this is a key reason that I feel such a connection to them - I see them as part of 'my' generation of classical musicians, who have enjoyed a rich musical diet and don't always tackle things in a strictly 'classical' way.) Rather than focus solely on 'complete works', themes dominate instead, allowing the pair to range across the repertoire finding comparisons and connections. Their first disc, 'Fleurs', brought together an astonishing range of flower songs, while the second, 'A Verlaine Songbook', used a single author's words to bring songs from 'hidden' composers like Poldowski and Szulc out into the limelight next to Debussy, Fauré and Ravel. (Interestingly, they have a recording forthcoming that is dedicated to a single composer - Schubert - and I can't wait to find out which path they've taken through his hundreds of lieder.) 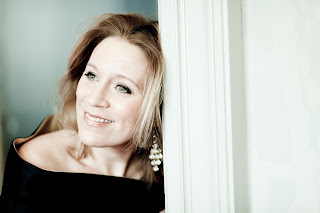 Of course, this wide-ranging strategy wouldn't work if the versatility wasn't as much in the performance as in the programme - and this latest recital, 'Reason in Madness', is probably their most thrilling demonstration of this to date. A survey of women in song who have reached - or breached - the limits of their sanity, we encounter Gretchen, Mignon, Bilitis, Ophelia et al as imagined by 11 different composers. The sequencing is truly deft: at face value, again it's like two sides of an LP - side 1 contains German lieder, and side 2 French mélodies. But there are several effects within effects.

Neat touches abound. For example, the opening trio of songs all feature women at the spinning wheel, a common motif for threadlike reason, about to career out of control. Equally, some of our heroines appealed to both German and French composers alike, giving a pleasing symmetry to the programme as the characters make 'mirror' appearances in both halves of the concert.

But the masterstroke of the sequencing is in the way the duo control the mood, and build the intensity. The lieder half is appropriately sorrowful and wracked - moving through heartrending Brahms and Schumann, then reaching a kind of mini-climax with Wolf's edgy Mignon settings. Then, we have a sort of 'reset'. The French sequence adds that unmistakable air of unsettling, near-chanson eroticism with Debussy's Bilitis songs an inevitable highlight - but all heading towards the tour-de-force at the close of the set: Poulenc's 'La dame de Monte Carlo'. This epic tale of a woman meeting her ruin at the gambling tables is more like a mini-opera, a perfectly dramatised ten-minute 'short' (similar to his earlier one-woman opera, 'La voix humaine'). 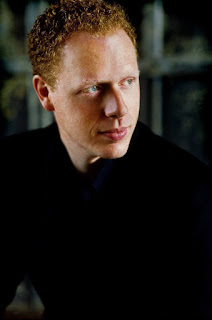 The entire concert was bliss, but something seemed to happen in that second half to make it feel like the recital equivalent of a plane leaving the runway and soaring into the air. It's tempting to speculate that after the Verlaine songs, then a sublime performance as Mélisande for Scottish Opera, something about the French choices here powerfully ignite CS's skill at undercutting an air of innocence and light with gentle melancholy one minute, then high-octane sensuality the next. Her singing is so pure and expressive that you could hear all these emotional shifts in the voice alone, even if closing your eyes.

However, because the songs were so dramatic in nature, both performers - I count the piano in this as much as the voice - were able to fully act. JM's swooning, startling dynamics notwithstanding, CS of course had to carry most of the visual attention. And seeing someone really act in the close quarters of the Wigmore Hall is a different experience from the distance that normally exists between singer and audience in an opera house. I was locked in so closely to CS's performance, I'd have probably dived after her into the sea at the dying notes of the Poulenc.

This, I think, is the crowning element of genius in the 'Reason in Madness' programme - that the visual and musical performance coalesce into something genuinely unsettling and intensely moving. The care taken with the concept results in the cumulative power of the songs overwhelming you, in the best possible sense. A clear contender for my recital of the year.

It's fantastic news that this set will also be taking its place in the duo's ongoing series of recordings at some future date. (Given the ace acting involved, it would also make a superb performance DVD - look to something like the film of 'Winterreise' with Ian Bostridge and Julius Drake for a precedent. Are you listening, BIS Records?)

Mind you, in other news, we have a lot to thank BIS Records for... as the next Sampson / Middleton recording to actually hit the shops is 'Lost is My Quiet', in September. They're joined by countertenor Iestyn Davies for a typically insightful range of songs from Purcell (again, adapted by Britten), Mendelssohn, Schumann and Quilter. To my knowledge, this specific set started life around the time it was performed as a chamber Prom: I was there (read more here) and it was quite something, a great atmosphere helped by a winning chemistry between the two singers. I can't wait to hear the recorded versions. (And while on the subject, isn't this one of the best classical music album covers in years? - like a rock album sleeve, but cooler!) 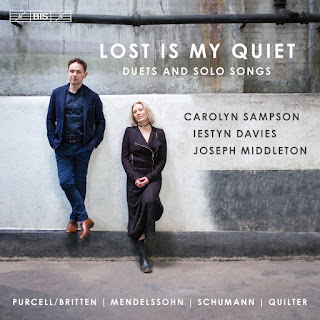