Snakes alive - it's my 100th post. So, as the old blog prepares to receive its telegram from its most royal reader (thank you, ma'am, thank you), maybe it's fitting that I've been thinking about age a fair bit in the past few days.

I know why this is. It's because of looking forward to, then owning, and now spending time with the new Leonard Cohen album, 'Popular Problems', released as Cohen turns 80. Cohen's recent history - which I'm sure many of you will already know about - is particularly bittersweet. During the nineties he was content to withdraw from public life into a Buddhist monastery, emerging only to find that he had seemingly been swindled out of his life savings by his management.

While I'm sure the various lines between cause and effect are more complex than this makes it sound - his ultimate response was to pick up where he left off. Touring again, the warmth of the reaction seems to have re-lit his creative fire and he's made two new albums in three years - matching his old work rate. In fact he's more productive at 80 than in the 80s.

'Popular Problems' works beautifully whether taken by itself - or as the latest in a series of stepping stones. Of course, it cleaves closely to the familiar LC sonic template and you could have a successful game of Cohen bingo while listening: Slow, funereal pace? [Tick.] Angelic female backing vocals? [Tick.] Arrangements of seemingly infinite space? [Tick...] 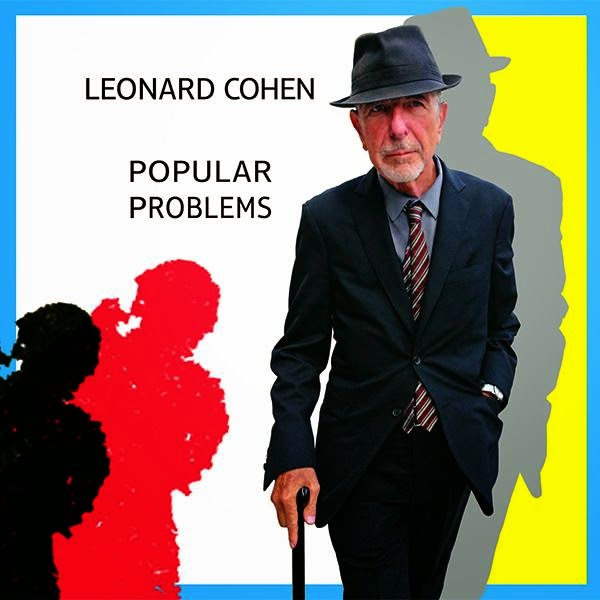 But more than that, it's an album that evokes Cohen ageing into an 'old sound'. I love LC beyond reason, and still, when I listen to some of his early songs, I feel he has that Dylan-like quality of wanting to be let out for the day, a significantly higher vocal on the point of wandering off, bored of the serenity. By the time of 'I'm Your Man', he's deeper and robust, the standard-issue acoustic guitar superseded by a steady, shiny rumble to reflect his voice.

His last album title, 'Old Ideas', has that lovely wordplay that can mean 'new thoughts from the aged' - and to me it feels like it would be the perfect name for this release. As it stands, the reappearance of the black and red shadows from that sleeve on the sparse artwork of this one gives 'Popular Problems' the feel of a sequel. It certainly announces a further stage of maturity. It's stately and sedate; an adult record, for adults. The licks of brass or strings sometimes sound distant, as if our hearing isn't what it was, or too sharp or strident a blast would worry our hearts. Roaming basslines carry tunes leaving Cohen with the drawling, delicious precision of a rapper on a 45 played at 33 ('Almost Like the Blues'). On one track, 'Did I Ever Love You', LC carries an audibly demanding - and gorgeous - tune in the verse, only to delegate the entire chorus version of the theme (a faster shuffle) to backing singer Dana Glover, as if he's off for a lie-down or getting his breath back. The record insists you follow its trajectory, and take the appropriate time to digest.

Cohen is so advanced in years for a rock star that his age is still a surprise, an anomaly. As ever, this is just rock being an upstart. Length of tooth is not an issue in, say, classical, jazz or folk. You're expected to wave your baton until it drops, or play piano until you slide off the stool to the pedals. But rock - a youth itself in comparison - is still working its way through what to do with its first old people, despite carrying a hint of the idea that even pop shouldn't be left to a bunch of unreliable kids. More mature figures have haunted bands' peripheries since the start and some pioneers have attained their own fame/notoriety: businessmen (Brian Epstein, Berry Gordy), ferocious guardians (Peter Grant), boffins (George Martin, Joe Meek) - it's why we have the Cowells and Watermans of recent decades.

But now the artists themselves are moving nearer the radiator, and warming up. Obviously, with nostalgic hits tours, there is sheer exhilaration for the audience - plus income and, I trust, a pleasurable sense of achievement for the musicians. That said, I wonder if we're beginning to see a trend where those in their career-twilight are discovering the freedom and will to make late and great artistic statements. Paul Simon released the extraordinary 'So Beautiful or So What?' in the year he turned 70, and assembled a crack band to tour it (the 'Live in New York City' record showcases these amazing sets, without being skewed towards the 'Graceland in full' gigs he was doing around the same time). Scott Walker - the personification of avant-old-guard - is about to release an album with drone/doom metal band Sunn O))). Robert Plant, who will not stay artistically still, however intense the pressure to cave in and let Page reassemble Led Zeppelin, has just released a new record, with another new band, to rave reviews. And appropriately enough, the spring chicken among them, Kate Bush, has returned to the stage showcasing recent rather than old material and re-inventing the 'normal' live gig into something rather innovative: the introspective, intimate spectacle.

This doesn't appear to be a group dynamic. Bands have too many moving parts, nothing still or exact enough to settle. I think people really do prefer their Stones and Who when keeping to the hits. There is something about it being one pair of shoulders, a solo figure who has borne all that experience and is channelling decades' worth of it into their music. And it strikes me, just running my eye over the examples I've happened to mention - Cohen, Simon, Walker, Plant, Bush - that it helps if there was something old about you, even when you were actually young.