It's still sinking in that I've now been to see Kate Bush play live at the Apollo in Hammersmith, London. A lot has been written about these gigs following the opening night of the residency, and I'm sure what I type will overlap with some of it - all the same, I'm aware that some folk going later in the run want to know as little about the concert in advance as possible. If this applies to you: please consider this post spoiler-packed, and back away now. I would love you to come back when you've seen the show, and compare notes.

Before opening night, Kate Bush had not played live for 35 years. Her previous appearances in 1979, involving all manner of theatre and dance set pieces, had apparently resulted in the kind of exhaustion severe enough to put her off doing it again indefinitely... Or, until now.

Inevitably, as when any revered artists stage comebacks or reunions, there is genuine concern (from fans), scaremongering (from the media) and all stages in between. Can it possibly live up to our expectations? And come to think of it, what are our expectations?

In the event, none of this mattered. I had read that audiences had been giving her a standing ovation as soon as she appeared and, while I realised that Kate Bush probably attracts the most 'on-side' crowd of any performer, this felt somehow improbable, too yearning. However - there myself, in the moment, I leapt to my feet as the lights dimmed, somehow not bursting with the intense joy, excitement - and even relief - that pulsed through us all like a charge.

Kate smiles broadly, most of the time, and it brought home to me how few rock performers really communicate how much they are enjoying themselves. She leads on her miniature platoon of backing singers and dancers in a line, then veers off to centre stage, faces front, opens her arms as if to embrace us and behaves precisely as if she'd never been away.

First: the facts. The show is in three sections, plus an encore. The first part is a 'set', performed in the style of a normal concert. Then parts two and three - either side of an interval - are made up of full performances of her two 'sequences' of songs 'The Ninth Wave' (the second side of the 'Hounds of Love' album) and 'A Sky of Honey' (the entire second disc of her double album 'Aerial'). Back on stage for two more songs... and then she's gone. The gig was in fact close to three hours long, but so captivating that it now feels to me like an instant, every bit the dream that seemed impossible for decades.

The sequences are not just played - they are fully staged with tremendous visual flair and in some parts actually dramatised, with sketch elements and spoken word interludes. As befits someone whose music can sound so alien and otherworldly - and somehow a perfectly plausible product of 80s recording studios - the presentation is an ingenious mix of high and low tech. During 'The Ninth Wave', a miniature stylised helicopter (with blinding searchlight) careers over our heads, yet the ocean it's searching consists purely of huge billowing sheets, agitated into waves over the stage by arms and air.

As beautiful and overwhelming as this was, it was perhaps the opening section of the evening that, for me, held the most intrigue. While the songs had no formal connection with each other, it seemed to me that they were very carefully chosen, every bit a 'suite' as the two sequences that followed. I had forgotten how sinuous, how sinewy much of her music is; the band (who have clearly been drilled to telepathic levels of tightness) do not chop, strum or clatter over or against each other. Instead they make an almost uniform sound that lays the groundwork for that voice to soar. 'Hounds of Love' itself no longer jerks and judders in quite the way it used to - instead it seems to pound and resound. Most of the rhythms, like Kate herself, seem both slinky and stately, creating a kind of delicate funkiness that brings something else into focus: she is still a brilliant mover. 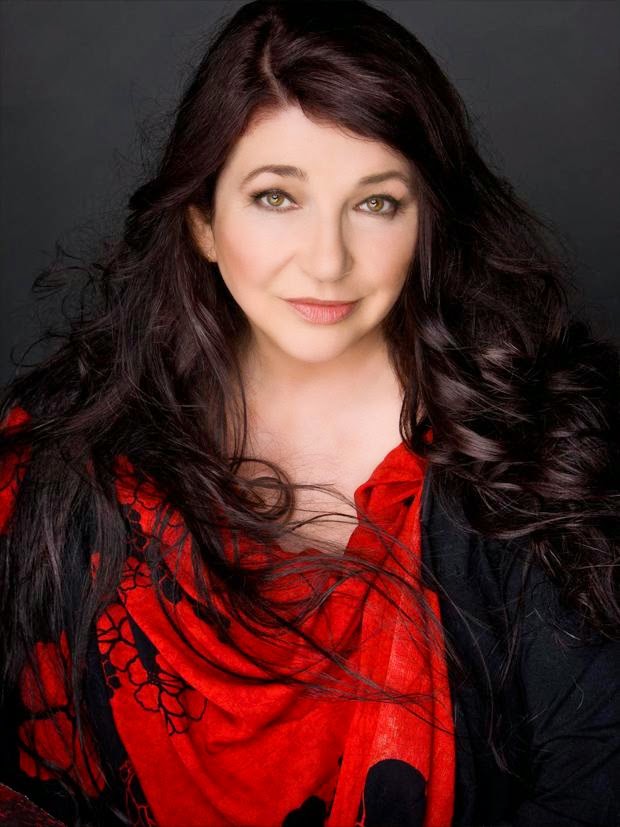 The pace is measured, but Kate dances all the time. Hands, arms, head, bare feet - all in subtle motion, regular, understated, buoyant on the beat. The image she has chosen to present is elegance itself: the cascades of long black tresses are familiar enough, but she turns away from the audience frequently and we can see the strands of her black shawl create the illusion her hair is almost infinite. (It would be quite wrong, in fact, to assume this isn't a physically demanding show - the theatrical sections demand a lot of mime and movement, including some brilliant illusions that involve her moving some significant distances in very short spaces of time.)

Her voice is still extraordinary, its power and versatility intact. She has total control of quiet/loud dynamics and mood swings that turn on an instant - especially during the classic 'Top of the City'. 'King of the Mountain' closes the opening set (deliberate, I'm sure, as the storm at its finish hurtles straight into the swirl and surf of 'The Ninth Wave') - and Kate finds notes so low, she merges with the bass and enhances its undercurrent.

Why this show? Why now? Why play nothing from the first four albums - when there's every suggestion that vocally she has nothing to fear from them - or, for that matter, nothing from 'The Sensual World' either? I suspect it's something to do with how driven and forward-looking an artist she is.

Her recent 'Director's Cut' album - one of her few retrospective enterprises - had her cherry-pick from 'The Red Shoes' and 'The Sensual World' and dress the songs in new sonic clothes. With the 'Red Shoes' tracks, she took the chance to improve seven of them and make versions she thought were better. 'Sensual World', on the other hand, went through slightly different treatment - only four new versions, not necessary, as such, but more opportunistic. For example, the estate of James Joyce relented on using text from 'Ulysses' in her lyrics, so she was able to put together the title track the way she'd originally envisaged. This is the closest she has come to any kind of serious reissue - as the collector's version of the album comes with the original two source albums as a bumper bonus. Only 'The Red Shoes' was remastered though - she was quite happy to include 'Sensual World' as it was. (And those first four albums remain untouched, too - so far, only 'The Dreaming', with no enhancements at all, has been given a new lease of life on her label.)

So, once something is completely finished - once she is truly happy with it - she can apparently lay it to rest. And I can see why she feels no need to revisit the early days. While her musical genius arrived fully formed, she explodes across those unforgettable first albums - released at the kind of rate that we'd never associate with her now - living through her adolescence and education in music, everything from periods to politics making cameo appearances amid the cultural and literary references.

Now her music over time has become more progressive, in the best sense of the word. Ideas and concepts are worked through at greater length, in greater detail - not only the sequences we heard live, but also, say, the latest record '50 Words for Snow', which stretches its seven wintry tracks languorously across 65 minutes.

The theme of 'artist as mature woman' (with precocious girlhood behind her) seems deliberately evoked in the show - in the opening section, two of the six songs bear women's names ('Lily' and 'Joanni') - and motherhood, even more so. This is inescapable given the prominent role she gives her game, charismatic son Bertie who dances, acts and sings until he's definitely made his own independent mark on the performance. Bertie takes on the character of the Painter in the 'Aerial' sequence - originally voiced by, of all people, Rolf Harris. While one instinctively wants to gloss over this, it's hard not to think Kate is boldly reclaiming the part by giving it to her son, a child at the time it was recorded. It's also there in the family bond central to the drowning woman in 'The Ninth Wave' who pictures herself safely back at home with her partner and boy.

I think - and hope - Kate Bush regards this beautiful, beguiling show not as nostalgia (like so many hits-packed comeback gigs) but as the latest step in her ongoing artistic progression. I have loved Kate Bush all my listening life. Would I have preferred more crowd-pleasers? No. I would have been equally elated, but not as inspired, thrilled and challenged. She has put away childish things, it seems - and so must I. Gladly.

* * *
The photograph is the main portrait on the page of Kate Bush's website advertising the shows. I can't see a named photographer but will credit if anyone knows and can tell me. Any problems with its use here - please say, and I'll remove it.