Picking up the baton

I was interested to read that the BBC had come in for some stick last week (it must all seem a bit of a blur to the BBC these days, to be honest) for sidelining contemporary classical music. It's possible to understand why the Beeb might be particularly aggrieved at an accusation along these lines. After all, we are in the thick of the Proms, possibly the greatest classical music festival in existence (80-odd concerts every summer), curated and run by the BBC and broadcast in its entirety live on Radio 3.

This year they have managed to broadcast three Proms a week on television (BBC4) and brought back the successful magazine show 'Proms Extra', which combines the relaxed 'panel on a sofa' format with expert - but never forbidding - dissection of classical works, not to mention some nifty closing performances by the guests. Katie Derham is particularly good at this format, knowing when to direct rather than interrogate, and by preparing the right questions for the right people, can set 'the sofa' off by itself. I've particularly fond memories of Mark Elder explaining why having composers present at rehearsals is a nightmare - with Eric Whitacre sitting right next to him; Peter Maxwell Davies delighting in "being 80 all over the place"; and the razor-sharp, yet gentle and precise, insights of pianists Imogen Cooper and Stephen Hough.

Yet, in one of those odd decisions that feels like it was made in a clouded instant and now cannot be reversed, they have been editing modern classical pieces out of TV broadcasts of concerts featuring work by old 'reliables'. As The Guardian reported on 2 September, these are not isolated incidents: pieces by Harrison Birtwhistle, Jonathan Dove, Helen Grime, John McLeod and Roxanna Panufnik were all missing when the Proms in which they appeared were shown.

The points of opposition seem clearly drawn. The BBC: we've always had to cut Proms on TV because of schedule constraints. Obviously we have to keep in the pieces audiences will know. Composers/commentators: well, actually, you don't. In fact, you're denying new music an audience, when exposing them to unfamiliar stuff is exactly what you should be doing. (It seems to go without saying that TV is the place you find your new audience. The radio broadcasts are utterly comprehensive, but listeners are usually looking for them - there aren't many people who find Radio 3 by accident, repeatedly, only to think, "Oh GOD. Classical again." But people still channel hop and stumble across things on the telly.)

If only it was this simple. After all, the BBC have made some contemporary pieces available in visual form. In particular, they appear on iPlayer - possibly the least likely place you would casually find something ever. And new music with a kind of occasional reason to take centre stage (poignantly, the final works of John Tavener, or the 80th birthday celebration for Peter Maxwell Davies) have received the 'proper' BBC4 treatment.

The problem is surely the editorial 'lie' of messing with individual concerts. One of the ways you expose rookies to new music - especially shorter works - is to combine them with more familiar fare. (This is something the Proms really do, always, strive to achieve.) And if you're on your programming mettle, you can draw out links between the older warhorses and the modern pieces, expose the odd influence, and make that newer item more memorable for the people hearing it. Televising concerts with the latest piece of the jigsaw missing: no good can come of it. It's revising the history of that performance to wipe out something that the people who were actually there got to hear. It's as if no-one is pushing classical music forward, stepping up to the challenge presented by the 'greats'. As if no new music can jostle into place and stand shoulder to shoulder on the same stage as its ancestors.

Choose whether or not to broadcast particular concerts: yes. Show concerts only to censor the bits you're worried are difficult: no. If you're showing a Prom, I want to experience what the audience experienced: no less. 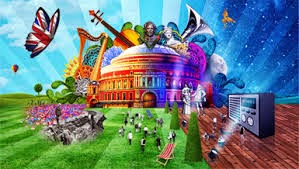 On another note, though: fans of pop, rock, soul, jazz or any other genre might be reading this and thinking: 'Ah, diddums'. The truth is - do we really get any new music TV? Not really. The only real example is 'Later...', but that suffers from its 'live authenticity' format - laudable perhaps, but highly constraining because it favours a certain kind of conventional band set-up. Otherwise, it's all heritage telly: theme nights on BBC4 about anyone who isn't current; talking-heads list programmes; and coverage of events like Glastonbury slipping through the net only to be 'multi-platformed' into oblivion behind iPlayer and the red button. (The Glastonbury broadcasts this year were so mind-bendingly complex, they needed a page of FAQs explaining where bits of coverage were hiding. Imagine if it was a sporting event: "Highlights from Glastonbury every evening, 10pm, BBC2".)

So - it would appear the BBC is scared of all new music - not just classical. Yet part of me thinks that it could be classical music programming that can drag the Beeb out of this rut. Let me briefly return to the secret weapon that is 'Proms Extra'. I realise this is random enough to be, possibly, 'pie-in-the-blue-sky-thinking-outside-the-box', but why can't we have it on all year round? (With a different name, I suppose!) The BBC seem convinced - rightly, I think - that during the Proms there is an audience for, of all things, a weekly magazine show about classical music, containing a round-up of current concerts, educational pieces, comment and performance, all based on concerts given in two venues in London. Why won't this audience still be there when they are starved of actual Proms?

The more I think about this phantom show, the more I fantasise: in London alone, there are institutions that Radio 3 already have ongoing relationships with - Wigmore Hall (our leading chamber/recital venue), the two main opera houses, the Barbican, the South Bank Centre etc... Get the cameras in. Get them on the show to let viewers know what's coming up. And there's no need to be London-focused - the BBC already has five orchestras, and one is based in Wales, another in Scotland. What about the Halle Orchestra, or Opera North, and so on....? The classical music press assumes its readers are either based countrywide or will travel: the magazines carry advertising for ensembles and venues all over the country, and for opera in particular, globally. The TV show would be completely within its rights to follow suit.

And the classical field is reaching outside its own perimeter. Radio 3 has stumbled slightly with the loss of 'World Routes' but it still has some great jazz and some truly wide-ranging stuff with 'In Tune' and even more so 'Late Junction'. The Proms has already absorbed folk, jazz, urban, world and soundtrack music into its remit, not so much in the spirit of 'crossover' but inclusivity. Could my pipedream of a classical music show eventually gather these up too (in the same way that the real 'Proms Extra' has made a point of featuring the more esoteric concerts)... until the BBC realises that the audience for new music really has been there all along?
Posted by Adrian at 01:31