Was it fate? After celebrating this blog's century last time, I now find myself at Post 101. In the same spirit as its 'Room' namesake, would this entry find me having to write negatively for once? - even though I like to keep my nook of the net generally sunny, with only the occasional shower. Well, the answer is yes and, appropriately enough, no.

On an impulse, I booked a ticket to see Handel's 'Xerxes' at the Coliseum. As regular readers (thank you, darlings, thank you) will know, I tend to go to the Royal Opera House instead. The broad rule of thumb is: the Royal Opera perform the works in their original language (which I prefer), whereas the English National Opera - as the name suggests - perform in English translation. Where English is the mother tongue, it sounds more natural and doesn't cause me any grief at all: listening to Britten's operas, for example - or the ENO production of the new work 'Thebans' by Julian Anderson I attended a while back.

However, I was chancing my arm this time, for one reason: Alice Coote. I found out very late in the day that she was playing Xerxes (AC specialises in so-called 'trouser roles', where a male part - often sung originally by a castrato - is now generally performed on the modern stage by, say, a mezzo-soprano). Since she is one of my favourite singers (and gave an unforgettable performance of Schumann lieder I once attended), I felt I couldn't miss this opportunity to see her in action.

'Xerxes' is a bit like a romantic comedy that happens to be set 'at court'. King Xerxes of Persia - who has already agreed to marry Amastris - becomes infatuated with Romilda, the daughter of his top military man and, more awkwardly, his brother Arsamanes's girlfriend. Romilda's sister, Atalanta, also wants Arsamanes for herself, while Amastris turns up incognito to work out what Xerxes is up to - setting in motion a chain reaction of disguise and deception until it all turns out (more or less) happily. 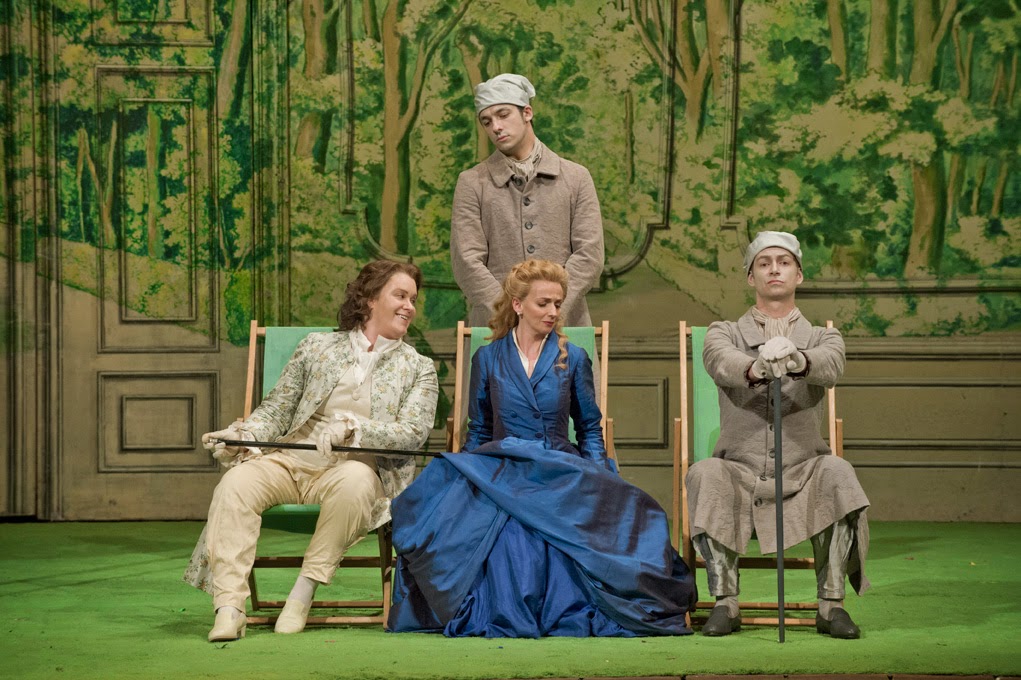 (The picture is from the ENO website, copyright Mike Hoban. Alice Coote as Xerxes, Sarah Tynan as Romilda.)

Reminiscent at times of both Shakespearean comedy and bedroom farce, the production is set as if in the Vauxhall Pleasure Gardens of Handel's time. It mines the cross-dressing potential by doing something more or less equivalent with the voice casting: Amastris in in drag as a soldier, sung by a contralto; Arsamenes, heart-throb to two women, is sung comically in a high register - here a counter-tenor but also historically by a mezzo. Xerxes really is a mezzo in drag. The lackey Elviro, sung by a bass, is forced to dress up as a flower-girl. *Brain hurts*

I like my sugary 'stick of Baroque' fix as much as the next listener, and am very fond of Handel's music. I have a few CDs with some of his opera arias (none featuring anything from 'Xerxes', however) and am a huge fan of some of the keyboard works - a particular favourite being the recent Richard Egarr recording of the Great Suites on harpsichord. So I was expecting to have a fantastic time.

It didn't quite work out like that. Two aspects of the evening proved my undoing: the 'form' of the opera, and the libretto. Watching a relatively early opera like this brought home to me how I've almost got into the artform from the 'wrong end'. Always attracted to quite difficult and knotty music - underground metal and grind, free jazz etc - opera clicked for me with the Nixons, Elektras and Wozzecks (and, slightly insanely on reflection, a complete Ring Cycle) ... so I seem to be working my way backwards. As a result, I'm more used to the 'post-Wagner' (big simplification, I know) idea of fully integrating the mood, melody and voice with the dramatic action.

'Xerxes' might have had plenty of plot, but it didn't provide this kind of drama. Partly, I suspect this is the nature of the music. Obviously there were some variations in tempo, otherwise it would fall apart. But most of the time, that almost merciless Baroque perfection, underpinned by the harpsichord like a toy engine packed full of Duracell, didn't seem to let up, whatever was happening on stage. Someone could be going through an appalling emotional wrench, but the orchestra would be as dottily cheerful as if it was all one big party. All the same: why should this matter, when I'm happy to surround myself with the cascades of notes in Handel's instrumental music? Answer: the words.

The irony is that this particular translation, by the director Nicholas Hytner, is almost certainly a wonder of its kind. Full of rhyme, alliteration and assonance, I can well imagine that in its own way, it's a bit like an abbreviated version of Anthony Burgess's achievement when he managed to subtitle all of the Depardieu Cyrano film in couplets. But to my ears, the movement of the opera is hamstrung by the incessant repetition of these words - no matter how 'good' they are, their effect is dulled by hearing them over and over AND OVER again, and the painstaking rhymes and echoes actually worsen this effect. I discover afterwards (thanks, Wikipedia!) that even at the time, 'Serse' (the original Italian title) was considered odd because of its high number of short arias, better suited to the comic elements which were themselves an innovation - a 'serious opera' was expected to be just that, without any of your modern, tragicomic, blurred genre boundaries.

As a result - come the end of Act 1, I was having a high old time with the exuberant novelty of it all, and remember tweeting a friend in the first interval to say so. In Act 2 (which had some great set pieces and what felt to me like slightly more variation in the music), I think I peaked - then by Act 3, I was beginning to feel that, if every line in 'Xerxes' was sung just the once, the whole thing would be over in 20 minutes...

It's a shame, because all of my problems - and they are 'my' problems - were with the opera. Not the production, which I actually think had a real greatness about it. And some of the best elements seemed linked to what I thought were the opera's weaknesses - in other words, the less I appreciated the opera, the more I appreciated the staging.

For example, one scene has Atalanta outline a scheme to Xerxes - many, many times. Wittily, the direction picks up on this: Xerxes becomes increasingly fed up as every time it seems like Atalanta must have finished, she starts up again until the king nearly combusts with frustration. Another beautifully crafted scene has an open air tea-room populated with grey extras, who glide about their business in slow motion while the leads sing and move at normal speed - as if commenting that the main characters take so long to say or do anything that time must slow to a crawl to accommodate them.

And, to return to where I started, Alice Coote was magnificent. I was impressed to the point of awe by her almost 'method' personification of a man. She had perfected all manner of cocky smirks and angry scowls, and carried herself with a visibly bullish swagger. She even sat down like a bloke, sprawling in her chair with legs at 'alpha male' right angles. The voice, of course, was not male: it was both beautiful and handsome - the warm yet robust quality that I already admired.

(I think if I were to fling pet hates into Room 101, there would be precious little music or art I would cast into the abyss - a possible exception being the sounds, whatever they are, that today's feckless youth have taken to playing aloud on trains through their tinny phones. Instead, I would rid the world of coat hangers - at least until they invent a prototype that will allow me to remove just one from the cupboard without a further 27 following immediately after. Also: straws for grown-ups. Why, when I order a soft drink in so many restaurants, do they bring it with a straw? Since reaching adulthood - in fact, significantly before then - I haven't needed extra guidance equipment to deliver a drink from the glass to my mouth. Anyway. As you were.)