Two trials: Verdi and Glass at the ROH

My latest two visits to the Royal Opera House were both slightly out of the ordinary. The first because it was a rehearsal rather than an official performance; the second because it was in the Linbury Studio Theatre in the depths of the building, rather than the main stage.

The dress rehearsal I attended was Verdi's 'I due Foscari'. ROH rehearsals are, in simple terms, a perk. You can only book a ticket if you're in one of the membership schemes (I'm a 'Friend of Covent Garden', affable chap that I am), and they are very, very cheap. They don't sell the seats in the lower areas of the auditorium, presumably to minimise unnecessary distractions for the performers, should they still be thrashing out a few last-minute touches. We also get a brief introduction at the start, reminding us that while we can expect a full run-through, there may be the odd hiccup, repeat or similar if necessary.

I absolutely loved the whole idea. The orchestra were all in mufti, which appealed to me as I don't really have a 'non-mufti' setting. And I don't think it's a coincidence - because everyone there has some kind of personal (and financial) investment in the place - that it was one of the most quiet and attentive Amphitheatre audiences I've ever been part of. The stage might still be miles away, but when you notice the sea of empty stalls below, the actual effect is to make you feel part of a strangely intimate experience, shared with far fewer people than normal.

Speaking of the sea - instead of the usual curtain, we had a projection of waves heralding the start of the opera. The two Foscari of the title are father and son. Dad Francesco is the Doge of Venice, and his luckless offspring Jacopo is summoned back from exile to be tried for murder. In the opera's backstory lurk decades of feuding between Foscari and the villain of the piece, Loredano. Both Foscari as Doge and Loredano, who is one of Venice's 'Council of Ten', are among the jury in Jacopo's trial, and - on the available evidence - even Papa has to agree to a guilty verdict. This central conflict between the old man's inescapable duty and love for his son is the engine driving the rest of the opera. Ultimately, Jacopo is proved to be innocent, but dies of grief as he is forced to leave Venice a second time, and Francesco - relieved of power with unseemly haste by the Council - suffers a fatal collapse. Loredano remarks that he is avenged.

The production, by Thaddeus Strassberger, is muted and seems to cloak Venice in permanent night. Dull walkways and bridges reminiscent of old wood or rusty metal move slowly and smoothly across the stage, serving to bring characters temporarily together, then pull them apart. The Council's blazing robes provide the only flare of malevolent colour.

So - it's bleak and hardly action-packed. But at the same time, it has something: it doesn't outstay its welcome given how plot-light it is, and the real focus is on three key, completely contrasting roles: the Doge (baritone), Jacopo (tenor) and Lucrezia (soprano) - Jacopo's wife, who petitions her father-in-law tirelessly for leniency. The drama is in the tunes, with the voices playing off each other in various combinations: even Loredano - a baddie so 2D that the some of the audience booed his bow at the end in sincere appreciation - sings in a sonorous bass, the vocal equivalent of the doomy filmic chords that herald the onscreen arrival of an evildoer.

I admired Maria Agresta's performance as Lucrezia - convincing as her character's determination lapsed into a desperate mania, then resignation. And the standout voice for me was tenor Francesco Meli, all passion and panic, even when confined in a cage suspended above the stage. But inevitably the production was about Placido Domingo, who in these late stages of his career has added baritone roles to his repertoire - and drawn as much criticism as admiration for doing so. Here I have to admit my novice status - and let's not discount how monumentally thrilled I was just to hear PD sing live for the first time. I felt his voice sounded beautiful, and true. Even though I don't have years of performances in my memory to draw on, I'm aware by now that one of today's younger 'actual' baritones - a Keenlyside or Reuter, say - would have acted up a storm and taken out the back wall of the house in the process. But I fell under the spell of this elderly man - acting his age - with all of that famous charisma intact. 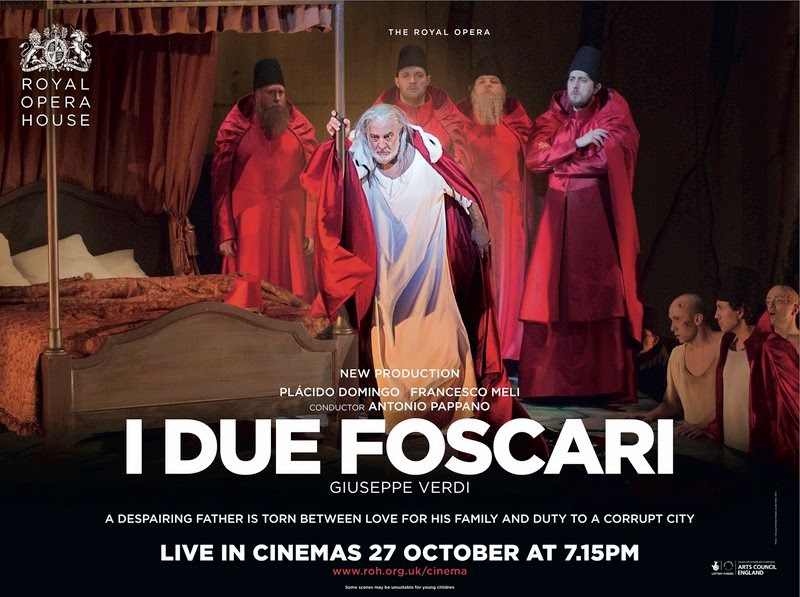 (The Royal Opera's brilliant poster for the cinema relay of 'I due Foscari'.)

The Linbury was home to a brand new Philip Glass opera from Music Theatre Wales: 'The Trial', an adaptation of the Kafka novel. Glass himself describes works like 'The Trial' as 'pocket operas', and on arriving at my seat at the very top of the auditorium - but bang in the middle - I immediately see what he means. Although I'd been in the Linbury before and was aware of its compact size, I hadn't really considered in advance what listening to an opera featuring a chamber ensemble would actually be like. Instead of the massed forces of the ROH's orchestra, I would hear one of each instrument, perfectly clear and close in the mix - and Glass maximises their individual effects brilliantly.

You might be familiar with the story, but just in case: Josef K, a bank official, is arrested on his 30th birthday. He has no idea why. K is allowed to remain free while the bureaucratic wheels turn - so has time to run the full gamut of emotional reactions: from terror and confusion to resignation and acceptance. His bizarre encounters range from his pompous lawyer - and said lawyer's seductive housekeeper - to the court portrait painter, all of whom seem willing to both help and hinder in equal measure. Every place he visits becomes another manifestation of the 'court', while he never gets anywhere near an actual courtroom. Beaten into submission, K allows the men who come for him a year later to kill him without any show of resistance.

I was already a fan of Glass's distinctive music, but even so I was struck by how perfect a match between composer and subject matter this was. The piece is about inevitability and dread: and Glass's writing for two instruments in particular brought this out. The cello's snaking, circling lines - textbook Glass patterns, simultaneously low and airy - encapsulated the story's black comedy in a kind of sinister, stealthy playfulness. And the incessant zig-zag riff of the xylophone sounded exactly like an implacable ticking clock, counting down to K's doom at the close.

The production is inventive - taking its cue from the mysterious court being both one place and all places, we remain in the same space with shifts in furniture and lighting suggesting changes of location. Everyone knows something K doesn't - so figures not actively taking part in scenes watch from an onstage window, and in a queasily amusing touch, hands (their owners unseen) reach on stage from gaps in the scenery at the sides to hand characters props and take them back. K truly is cradled into oblivion by the arms of the faceless State.

K - as Kafka's alter-ego, is a complicated man. While a victim from the outset, he is still a fully-rounded, awkward anti-hero - sexually active and successful, stroppy, difficult. I thought it was telling that Glass cast this role as a baritone: a robust, solid sound, rather than a more highly-strung, or fantasy-heroic - but then less 'everyman' - tenor. Johnny Herford, in every scene, made a superb K and was able to sing with a great deal of power while still using the vocal outbursts to convey his character's terror and weakness. Instead, the tenor character was, essentially, a fantasist: court painter Titorelli - sung and acted with a manically chirpy reassurance by Paul Curievici. Amanda Forbes also stood out in mirror roles as the alluring but ambivalent Leni, who may or may not be involved with any number of K's fellow defendants, and K's neighbour Fraulein Burstner, who may soon be able to give him legal help, but successfully escapes his advances.

Glass has his own record label, so I'm hopeful that 'The Trial' will at least make it onto CD, if not DVD at some point. The words are succinct and well-chosen (the adaptation is by Christopher Hampton), and anyone who's already a Glass fan - or is fascinated by how well the obsessive nature of a composer's music can map itself onto other, similarly driven works - will devour every note.