Proof of a great gig: the high survives the night's sleep and lasts well into the next day. Happy to report that that's the state I'm writing this post in, after last night's Oxjam event at Surya (a subterranean room near King's Cross, London), put together by Klarita of Kaparte Productions.

Most people who've tarried on the Specs blog will know that some of my favourite musicians work within a kind of 'dark' dimension just below the mainstream surface, creating work that ranges from (and is influenced by) folk, classical and electronica. Kaparte is one of the foremost champions in the capital for this music, and Klarita had put together an extrordinary bill that captured how so much variety and individual intent could gel so well into one glorious entertainment.

Opening the evening was Lloyd James of the band Naevus, playing a solo set. Naevus in full band format have a unique, imposing sound which knocks a few normal rock band conventions a couple of notches sideways: Lloyd plays acoustic guitar, not electric - so at the core of each song there's a kind of natural earthiness anchoring the noise, and the drummer, Hunter, plays standing up, adding to the tribal volume.

So I was really looking forward to hearing how the songs would come across in more 'unplugged' versions - and their power remained utterly intact. I'm a huge admirer of Lloyd's guitar playing. It isn't showy in the least, but steady and unyielding; and I loved the fact that even by itself, it had a grappling, knotty quality - chords, but not necessarily as we know them - as though the guitar part had been hewn belligerently from the rest of the arrangement. To his credit, he didn't shy away from the fast and loud stuff - 'Bleat Beep' for example, which features a manic chant that must need superb control, both strumming and breathing. Another great effect was that Lloyd's deep voice - from intimidating yell to conspiratorial croon - seemed to sometimes go beneath as well as above the guitar, as though it wasn't so much an accompaniment as a joint partner. Disarming and dramatic.

The middle two bands were new to me. Fear of the Forest bring on stage some of the most alluring (well, for me at any rate) instruments ever invented, including cello, hurdy gurdy and hammered dulcimer. While this meant I'd more or less fallen for them before they'd played a note - *reactivates critical faculties* - they bring out all the instruments' strengths and somehow make their sounds work harder. There's no need for 'traditional' bass (double or electric) and no conventional rhythm guitar or keyboard either. The cello provides the melody flowing through each track and merges with the drone of the hurdy gurdy to give the arrangement its foundation. This low lead line weaves through the cascading chimes of the dulcimer, making the songs deceptively light and fleet of foot, even when the subject matter hurtles into the blackly comic. It also means that Kate Arnold's gorgeous but intimate vocals can be easily heard. Anyone who, say, rates the US band Espers or has fond memories of The Eighteenth Day of May will love this group.

Extraordinary gear change for band 3, Matawan. Again, no idea what to expect, except that the stage had been cleared of its chamber folk instruments, to be replaced by two chaps constructing a super-computer out of pedals. Each plugging in an electric guitar, they took seats and began to create a shimmering drone. It soon became apparent that their set would be one long track, as they used the pedals to build and evolve the sound. At first I found it odd, but it acquired a kind of genuine beauty: the reference points nudging their way into my head were Godspeed/Mt Zion post-rock, or Sunn O))) - also two men creating beatless waves of guitar noise. But this sound was aiming to bathe rather than batter me. The intensity grew as the pair seemed to stop using their guitars altogether (I spent some of this set trapped behind a tall person, so it acquired an even greater sense of mystique for me than the band intended) and essentially make all the gradual shifts in the sound patterns just through tweaking the pedals. I'm certainly intrigued enough to investigate further - I enjoy listening to artists like, say, Sleep Research Facility, who are closer to sound art than music as such, and I think Matawan's work is of similar stamp: it needs absolute attention, and ideally, headphones and darkness. 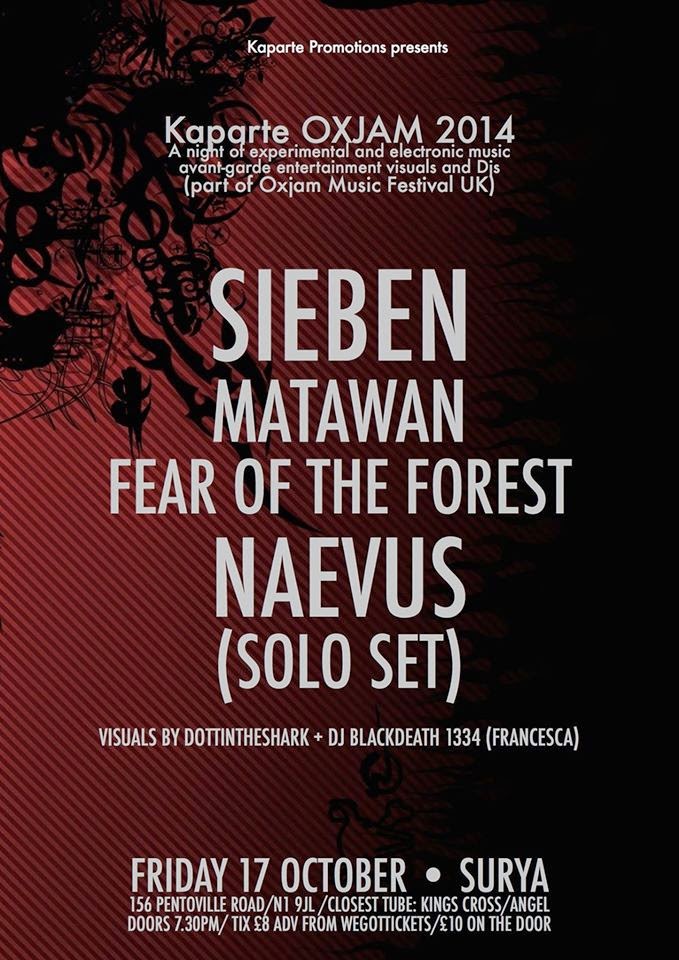 Headlining the event - and making this a completely unmissable ticket as far as I was concerned - was Sieben. I've written about Matt Howden's music in the past, so you can find more from me elsewhere in the blog on both his own solo work and as part of the Rasp project with Jo Quail. But as you're here: Matt writes and performs songs using just his voice, violin and a loop station. His music is like nothing else out there, I think, because he is restlessly innovative in so many ways. His albums are lessons in how not to repeat yourself: working within dark folk parameters in the early-to-mid 2000s, he created rapt love songs using flower names as a new language ('Sex and Wildflowers'), went down a more pagan/symbolic route ('Ogham Inside the Night') and followed the path to perhaps its logical conclusion with a complete mystery play in song, 'High Broad Field'. Then, turning the spotlight in on himself, the album 'Desire Rites' opens with a familiar sounding theme before literally changing direction in a brilliant 'coup de theatre' for the ears. (If you haven't heard it, seek it out - I won't spoil it for you.) The music is more furious and intense, and set the scene for a further run of records that push the Sieben sound in various directions: 'Star Wood Brick Firmament' perhaps veers towards a reflective tone before 'No Less Than All' blasts through it with complex, power-electronic beats. Then, to bring the story up to date - this year's 'Each Divine Spark' somehow marries the groove and intensity of the previous two records with a spacious and atmospheric production that melds the seductive and the sinister. And the genius tying all this together, to me, is the marriage of such invention, lyrically and melodically, with the looping technique - so that however arresting the imagery in the words, or involved the tune, the underlying repeat sequences lodge the patterns in your head.

'Each Divine Spark' is, I believe, the best Sieben album to start with, and possibly the best to date. But on the evidence of tonight's performance, Matt has not been resting for a moment. The set has typically, and beautifully, measured moments - 'Love Must Wax Cold', 'Sleep, Clara Bow' and 'A Firebug Nature' swoop and glide with characteristic elegance. But something else is unleashed. Always a compelling live performer - because every sound comes from the violin, Matt strikes it at various key spots to create the beats, and scratches his chin on it for a 'shaker' effect - he is now careering around the stage faster, soloing with greater ferocity. He asks more of his voice, and changes distance from the microphone to vary its place in the mix. Sometimes he sings into his violin pick-up (which bends and echoes the sound) and loops it alongside his 'normal' voice - to the point where my friend Jon, who came with me to the gig, remarked that it was like hearing the vocal harmonies for the first time.

A new track, 'Black Moon, Rise Again', has the feel of a ritual: it builds and builds to an epic length and sound, locking the audience into its mantra - yet similarly intense treatment is meted out to an old Ogham track and a Joy Division cover. Matt loops the songs to the point where there are long stretches when he doesn't actually have to play the violin, allowing him to focus on his soaring vocals and loosen up his body. His signature piece of stagecraft - the whirling of the bow on the tip of his finger (always after carefully testing the height of the ceiling, I've noticed - health & safety) has never felt more like an engine, a generator providing the power to ratchet up the energy levels.

I've never been anything less than elated by a Sieben gig, but I think this one was the most powerful I've seen to date. It acted as the genuine climax to the evening, with Lloyd's solo acoustic, Fear of the Forest's lilting darkness, and Matawan's ambience all providing the launchpad for Matt's heady mix of all that's compelling and creative in the scene - and highlighting the ongoing brilliance of Karita's programming. (Not to mention Slimelight's DJ Blackdeath 1334 - also known as Francesca - who sustained the mood during the changeovers with one superb track after another.)

Finally, can I recommend that you visit another review of this evening's delights by Miss Gish, who writes with an ideal balance of observation and enthusiasm - and who also captured some beautiful photographs of the performers in action. A must-read!