Recently, I started going to the opera. Properly. I had been a few times when considerably younger (early 20s - mine, obviously, not 'the') and I'll come back to those experiences a bit later. Since those days, I had listened to plenty of classical, choral and operatic music but only really tackled the first couple of categories live.

However, regular readers of this blog (thank you, darlings, thank you) may recall that I had a baptism of fire during the summer - literally, given the temperature in the Royal Albert Hall - by seeing all four operas of Wagner's Ring cycle in a week. I realise this was quite a 'high-risk' enterprise and that I could've emerged thinking that was enough opera for another twenty years, but I had the opposite reaction. I was immediately desperate to hear more, although perhaps while making use of a seat and not reaching desert-exploration levels of dehydration.

Cue my initial, wary investigations on the Royal Opera House website. I went for the Royal Opera House rather than the English National Opera at the Coliseum, by the way, not out of snobbishness, but because I just feel instinctively that I would prefer to hear the operas in their original language rather than in translation. It feels to me along the same lines as watching a dubbed film instead of a subtitled version. One of the early opera visits I mention above was to a production of 'Eugene Onegin' in English. Against the climactic crescendo of the second act (if I remember rightly), with all the dramatic power she could muster, the soprano sang: "There goes a shepherd. The world's at peace. I'm not." And we're talking a local theatre budget here, so there wasn't even a shepherd. I made a mental note to try and hear operas in their original language from that point on. 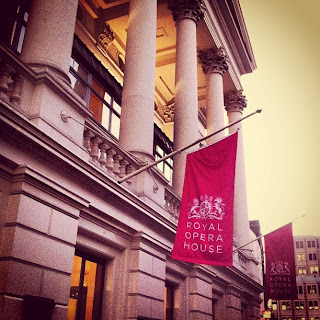 The Royal Opera House website is clever, attractive and slightly scary. Once you find a production that interests you, you will see ticket price ranges like "£7 - £160' *faints*. Then, you move on to the booking stage, and come across seating areas with matchlessly flamboyant names, like the Donald Gordon Grand Tier ("Hello, Donald!" "Hello, Gordon!") or the Amphitheatre Upper and Lower Slips. Fortunately, the Google street van* (*possibly - not sure) has been round the auditorium and photographed not only the view from every seat in the place to show you what it's like, but also the seat itself. And no wonder, since a lot of them seem to carry a health warning. The really cheap options tend to have some kind of restricted view element, occasionally with the description "not suitable for those of short stature". Others aren't even fixed to the floor. (Not sure how these seats actually retain their position in the space-time continuum - maybe people are just all wedged in and held in a kind of stasis? "Warning: this seat isn't actually there.")

This continues once you actually receive your ticket. Mind the steep stairs! No armrests! What next - "Beware! Contains opera!" on the envelope? Opera needn't carry any kind of reputation for being elitist - not at all - but extreme? Yes! This isn't for wimps. You don't necessarily need affluence, but you do need application.

The truth is: once you get one visit under your belt, this sort of thing never worries you again. I had been to the Royal Opera House before - another of those early brushes with arias and graces - to see 'Turandot' with my friend Laura from the US. That evening is a very fond memory, and my excitement on returning was definitely blended with nostalgia. However, it was different this time because the House had undergone its most recent facelift a few years after that visit. Inside, you now glide past pre-performance diners on an escalator through a palatial atrium up to the roof terrace. This extra shot of modernity actually suits the place well, and its air of slightly posh chaos takes away any potential intimidation. 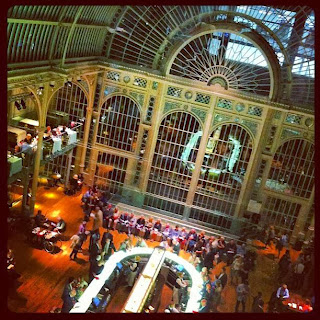 I've now found that the main Amphitheatre seats suit me very well (and they will be even better if I can slightly reduce my own 'rear stalls' at some point), so I go for those when booking. They are broadly speaking, the price of a mid-level rock gig. You are high up, but this gives you the opportunity to take everything into your field of vision - the stage, of course, plus the surtitles - without straining your neck - and you also have a view of the conductor and orchestra, which I really enjoy. (Just for the avoidance of doubt - as it's quite a jargon-y word - 'surtitles' just means the English translation, like subtitles, displayed above rather than below the action. I confess that the first time I came across this word it was hearing it aloud, and I couldn't make sense of it at all. "Ah! Sir Titles! Have you met Lady Appellation?")

By complete coincidence, extremity has been a major factor in the first couple of operas I've seen there since my 'sabbatical': 'Elektra' by R Strauss and Berg's 'Wozzeck'. The former is myth, the latter modern - but the parallels are striking. For example, in how they're performed: 'Elektra' is a single act, and while Berg's opera is divided into three acts of five scenes each (it's a stylistic tour de force where each section is based around a musical form or technique, and it directly reflects the fragmentary state of the main character's mind), it was played out with no break to alleviate the tension. They are both studies in madness - Elektra driven demented by her desire to revenge her father Agamemnon's death, and Wozzeck the victim of medical experiments sanctioned by the authorities - and both call for extraordinary onstage deaths.

Elektra (who normally survives in most versions of this part of the myth) has to die at the climax of a jubilant dance once vengeance is achieved - and this production solved that slightly odd decision brilliantly by having her energy desert her before she collapses, exhaling, seemingly of a heart attack. Equally, Wozzeck - after killing his lover, has to wander into a pool where he has thrown his bloody knife, and drown. The extraordinary stage set, tiled like a laboratory as if everything we see is played back in the lab-rat Wozzeck's mind, included a series of tanks - one filled with water, already blood-red from the earlier murder. Simon Keenlyside, in the lead role, climbed in right in front of us, submerged himself and stayed still, underwater, for the remaining 10 minutes or so of the opera. They use an almost invisible breathing tube to achieve this (and avoid ritualistically slaughtering baritones) but the effect is spine-chilling. 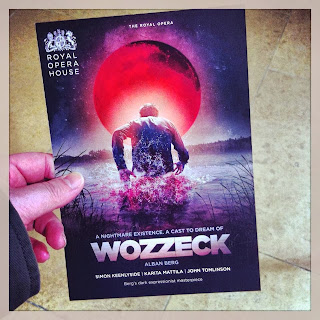 Having my love of opera re-ignited by concert performances, I'm actually still getting used to seeing proper staging, and the alternative interpretations it allows. In 'Elektra', there was a deliberately early 20th century appearance - the notes on the House website helpfully explain that the production is designed to evoke the emergence of psychology and loosening of morals during that time, appropriate for the 'actual' era of the myth. As such, the palace has a glassy wall and the entrance is by a revolving door. Brilliantly, horrifically, the offstage murders at the climax as Orest carries out the revenge are shown by the blood splashing the glass from behind, until the battered, dying Agisth careers around in the revolving door, only to be pulled back in to be finished off.

Clearly, the whole look of the productions has preoccupied me, because that element is still, for me, the novelty. As it turns out, what I've seen first has been 'horror-movie' intense (I'm not really expecting much of this sort of thing when I see 'The Marriage of Figaro' next year). But none of it would work without the sublime playing of the Royal Opera House orchestra, and the fearless performances of the casts. I've already mentioned Simon K's athletic feats during 'Wozzeck' and even more impressive, for me, were Christine Goerke as Elektra and Iain Paterson as Orest in 'Elektra'. Elektra is a 'rite of passage' role for sopranos with stamina, and Goerke simply owned the stage, always on the move, relentless and malevolent. Both she and Paterson were particularly accomplished at singing such a demanding score while really acting - again, something that is less prominent in a concert performance. For all the blood and thunder, I will never forget Orest, the deed accomplished, sinking down by the desk where Elektra lies motionless, unable to look at the body or answer his surviving sister.

Musically, both of these operas are 'challenging' - there's not much in the way of pretty melodies (although plenty of dark, anguished beauty) or show-stopping arias - but only in the sense that the dissonant, edgy, sinewy music matches the equally disturbing subject matter. Seeing them live brings home the idea of opera as Wagner's 'total experience', where the music and drama unite to create a kind of separate artform. The way the music conveyed by both singers and orchestra can act on your emotions, sometimes independently of each other. The volume and power that the great performers can give a line. Where they choose to be, what they do, and what happens in the silences.

Productions like these show how vital, energetic, arresting and uncompromising opera can be. But now, after being smacked about the head a couple of times with my cast-sheet, the next opera I'm seeing is long, mystical and heady: 'Parsifal'. I'll report back.