All of us are snuggled up into our jackets in the pews of St Leonards, Shoreditch. We are one act into a bill of four artists (who all perform so brilliantly that I think I'm probably going to come back to this concert in at least one further post). The church is dimly lit, with an almost sinister splendour, and provides spine-tingling acoustics.

Bitter Ruin take the stage. I've written about them before, but for those of you unfamiliar with either the band, or this blog (welcome, welcome), a summary: as a duo performing live, they are Georgia Train (vocals) and Ben Richards (vocals and guitar). Whatever might have instantly leapt into your mind while thinking 'a girl, a boy and an acoustic': forget it. Georgia has astonishing range and flexibility and can switch from operatic power to seductive whisper within a verse; Ben - no mean singer himself - displays similar dexterity on the guitar whether he's firing off flamenco-like runs or hard rock riffs.

This is ideal, because the songs don't slot easily into any genre: you might think they're folk one minute or a kind of jazz / torch song approach the next - no, wait, that's metal - my mistake, it's Americana. I mean this entirely as a compliment: both they and their songs are so full of distinctive character and presence that they make all these influences gel quite seamlessly. They amplify their music not just aurally, but visually, too: they bring in a sense of performance art and choreography, habitually dressing in a particular, near-matching style, and acting out some of the more intense numbers with utterly convincing ferocity. They may cover the whole stage for one song, take seats for the next, perform a third back-to-back - constantly stimulating the audience's eyes, ears and minds. 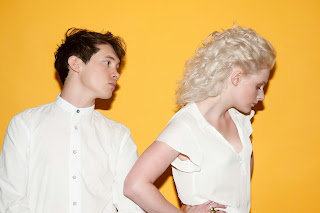 This song is their new single, 'Diggers' (which is available for download here). It's a perfect demonstration of the band's restrained power, as if coiled ready to strike, and how they can take what might seem to be something straightforward on first listen and layer it with complexity and elegance. Ben's repeated chant is the first element to get under your skin, and then you might notice how Georgia's vocal orbits around the mantra, constantly shifting parts of the tune, singing part-words. (Georgia's descending vocal just past the two-minute mark - not heard anywhere else in the song - is heart-melting.) This 'more than meets the ear' quality keeps me coming back to their music time and time again, always hearing new things after God alone knows how many plays. 'Diggers', in particular, is like a beautiful haunting.


The St Leonards gig is the first time I've seen them play live as a support for some time, so there is a slight difference in the dynamic from when I've been watching them lately as part of 'their' crowd. They look a little bit different and rather brilliant - the muted colours are absent and Georgia has swapped her usual flowing skirt for glittering leggings, Ben is sporting a patterned shirt. I mention this not to draw attention away from the music or discuss image or glamour - more to say that the attire made them seem somehow more lithe, agile and hungry. They made more space around themselves. They adapted from their usual rock venues - more claustrophobic environments like the Borderline (for London dwellers), say - to fill the sky-high space of St Leonards with their personalities and tune after glorious tune. They moved away from the microphones to sing and play their final song among the audience, directly into the acoustic - literally walking into our space, coming to get us. Succeeding.

Bitter Ruin's new album 'Waves' is due out next spring, but as well as 'Diggers', you can listen to their previous EPs on their Spotify page here, or go to their website for more information. Make haste!
Posted by Adrian at 14:44