A few days ago, I wrote about one of my favourite bands, Bitter Ruin, and how they followed up a powerful live performance at St Leonard's, Shoreditch, with the release of a mesmerising new single. I also said in that post that I would almost certainly come back to the concert - and here I am, doing just that, while the experience is still lodged near the front of my memory. And 'experience' is the right word, because as the evening went on, it felt increasingly inadequate to think of it as just a 'gig'. It was actually a masterfully programmed event where every element slotted together like a jigsaw, and it provided a similar sense of elation as the concert came to an end and the final piece fell into place.

To begin with, I really admired the choice of artists: Mary Hampton played first, followed by Bitter Ruin, then Jo Quail, with Jarboe headlining. (Regular readers of the blog - thank you, darlings, thank you - will already know that I have favourites from this line-up, namely the middle two acts. Given that I found out about them at totally separate times and places, you can imagine how delightedly stunned I was to find them coincidentally sharing a bill.)

The artists involved are so original that there was no question of them all sounding like each other. But I did sense a kind of shared aesthetic that made the line-up click. Not visually so much (although the visuals played an exhilarating part in proceedings - see below)... more that they were all perfect choices for the St Leonard's acoustic, and each creates music carrying a certain level of ritual and reverence appropriate to the setting.

This ceremonial atmosphere was established so successfully, I believe, because of the way the event was allowed to build. It helps, of course, that St Leonard's has most of us ranged in pews and that there is no to-ing and fro-ing to a noisy bar throughout. But you don't get a crypt-like silence from a crowd just by removing distractions. Mary Hampton initially looked for all the world like a textbook opening act - and playing solo and seated, she could easily have been a little too low-key, had she not sounded utterly beguiling. That otherworldly voice, high but strong (and she performs one song with no instrument at all), focuses the audience completely on her static figure and her set is over before you even notice the time.

Bitter Ruin are more used to a bustling audience and seize the opportunity to make the most of everyone's undivided attention. They bring catharsis to the ritual - effortlessly mobile, but carrying off some truly staggering singing and guitar-playing, they enact their dramas-in-miniature as if each number was their last. Some of their songs hold back, the rhythm or energy going round in cycles, never quite losing control (the single, 'Diggers', is a good example of this) - while others are all about release, and build to colossal climaxes that threaten to raise the church roof even higher. 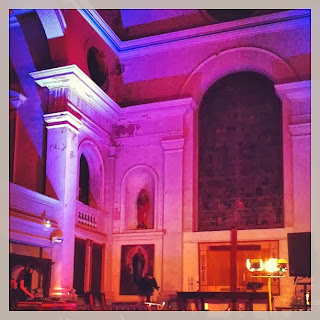 So, with the inaudible buzz in the congregation now running at a higher pitch, it was the perfect time for Jo Quail to take the stage. I've written about Jo a couple of times now (after first seeing her live, and as part of Rasp with Sieben's Matt Howden), but there is always more to say. For those unfamiliar: Jo's solo live act is just her, an electric cello, and a loop station. Without any pre-recorded elements, she builds up instrumentals of stunning variety, whether cool, measured, near-ambient meditations or raging, highly rhythmic pieces that build layer by layer into expressions of sheer orchestral joy.

A few things make this performance particularly special. For a start, it's the longest set I've seen Jo play - so, result. Also - and I touched on something similar about Bitter Ruin's presentation, too, in my previous post - Jo looked absolutely spectacular. As she mentioned onstage, she was wearing a dress made specially for her, and it really was remarkable - folds of material swirling round her, but with enough room for manoeuvre so that her feet, as usual, could dart left and right through the fabric like lightning to operate the loop pedals. It was like a feminine armour in rich, earth-tones that seemed so fitting for the music (which takes a great deal of inspiration from geographical locations and phenomena) and - perhaps by happy accident - the church backdrop, where Jo seemed to form a natural, visual focus for the candlelight and wood around her.

I realise I've wandered away from the music to discuss this, but this gig was special enough for the people involved to dress up. This isn't trivial. By this time, I knew I was at something unique. Act by act, the evening had surpassed my already high expectations, over and over. Visually, as well as aurally, it was starting to spoil me for future concerts. I can conjure up Jo's music in my head anytime I like, but now it's almost always accompanied with a view of her onstage that appears painted by a genius - where everything toned, matched, connected and sang.

And - I had never heard Jo play 'unplugged' before. During the set, she moved to the side of the stage and played a piece from her forthcoming album on a 'normal', acoustic cello - so no pedals or effects. As you start to lose yourself following the beautiful melody, a chiming note begins to recur alongside it, and for a few seconds you think - 'Ah! there's the loop.' But of course, it isn't - Jo is doing all of it, all at once, live, sounding the note with her left hand while playing the tune with the bow. I love the playfulness of that - the fact that JQ 'regulars' (like me) would be waiting for a 'loop', which duly comes, even though it shouldn't - wedded to the consistency of approach: the electronic facility might not be there, but the hypnotic, recurring elements should remain, and so they do.

Strictly speaking, Jo was 'my' headliner, as Jarboe was the act on the bill I knew the least about. I had admired her work in the band Swans, and heard her solo material in fits and starts, but was reasonably certain I wouldn't have heard anything she was due to play (supported solely by P Emerson Williams on acoustic guitar).

It didn't matter. Jarboe was clearly intent on maximising the ritualistic element. Again, the visuals were deliberate and important - PEW appeared in faintly druidic garb (dark, hooded) and didn't so much strum as caress sounds out of his guitar, displaying a delicate, ringing style that hinted at free-form. In a slight departure from the solemn-rite approach, he was clearly having a brilliant time and spent much of the set grinning broadly. I approve of this sort of thing. Jarboe, however, in a long red dress, barefoot, didn't once depart from her own personal space: never acknowledging the audience, between songs gazing at either her feet, or the art in the church. And I found myself approving of that, too. They made a good double act, PEW animated and fluid, Jarboe - her lyric book on the lectern - largely fixed to the spot, sha(wo)manic, spellbound, like a pagan angel. She sang beautifully, and we were in the palm of her hand, even though we may as well not have been there.

In a final masterstroke, typical of the whole evening, Jarboe did not even stay to acknowledge applause. In the dying bars of her final number, she exited down the church aisle. PEW kept playing while Jo Quail took the stage once more, and they closed the event with an absorbing, exuberant duet. It seemed designed to bring the audience out of their trance, and walk back out of the church with strings ringing in their ears instead of bells.

* * *
Since I've talked so much about how well the evening was put together, I should mention the organisers - Alan Pride and collective Chaos Theory - so you can watch out for other events they put on.

Also, here for your convenience are two videos that you should definitely see if you haven't already (I've posted both before and am unashamedly repeating myself): Bitter Ruin's splendid single 'Diggers', and the amazing 'Laurus' by Jo Quail.