OK - full disclosure. The Disappointment Choir is a band made up of two friends of mine, Bob and Katy. I knew them both before they got the group together, and even played in another (way more casual) band with Katy for a while. So I'm not exactly an 'unbiased' listener.

That said, if I didn't really rate their music, it would be very easy, purely as an act of friendship, to share their announcements and links with little or no comment and just help get the word out. Well, 'the hell' with that. Their debut album "Polar Ships" has just come out and it's brilliant. Here's why. 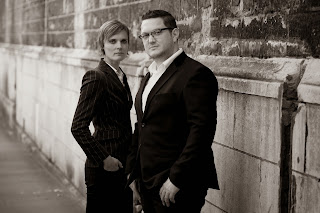 When I first played it through, I experienced a kind of nostalgic rush - a flashback to the 80s, essentially. I don't mean that the songs sound retro - not in the least. I've seen the laptop Bob uses for music, and even the mouse pad looks like something only the children of the future could operate. I think it's more that the 80s - my decade of 'growing up to music' - is when we last really expected that pop music (not rock, not dance, not electronica) would also be soulful, would also mean something. Take your pick - for me, say, it might be Ultravox, Talk Talk or even the Human League - all in their own way picking up the Kraftwerk baton and conjuring something flesh-and-blood out of their youthful technology. Even my favourite pop of recent times doesn't quite do exactly this. The DC don't really sound like any of those 80s outfits, but they are unashamedly pop, and they are the first band in years that, for me, instil this definite sense of melancholy and longing into the chips and wires.

The songs are uniformly strong, although the album is slightly front-loaded with what you might call 'the hits' (the wonderful 'I Heard You're In Love', which sounds like the Pet Shop Boys telling the Magnetic Fields to sort themselves out, is followed by two more storming, pacey tracks) - which, following extensive research, makes the first half of the album slightly better to hoover to than the second. But the more tender and searching tracks, like 'Fairy Lights' or 'The Lock Keeper's Song', lodge themselves in your head as securely as the fast numbers.


The vocals are also key to why the record works so well. Bob mostly anchors affairs with a deadpan, yet intimate croon while Katy has one of those 'don't hear THAT very often' voices which combines steel and vulnerability to angelic effect. Unlike those acts (often families or siblings) where, so the cliche goes, the harmonies make this seemingly impossible, inseparable blend - Bob's and Katy's voices are absolutely nothing like each other whatsoever. This is actually a fantastic thing - they harmonise beautifully yet retain their quite distinct characters. You can listen to some tracks on repeat, focusing on one voice, and then the other, and get a whole new take on the song. 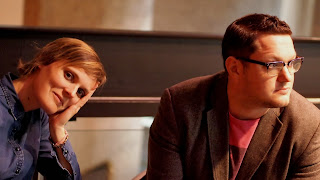 And that attention to detail leads me to the final thing I want to say about the album that makes me like it so much - it isn't seamless. In places, it belies the amount of machinery involved by acting knotty, angular and in-your-face. The arrangements and production are full to bursting with invention, so that instruments and sounds move in and out of the picture, constantly shifting - rhythms and beats change shape and mutate - blasts of synth one minute, followed by acoustic guitars the next.

They sound like a band of ten people, with the ideas of twenty. I am really, really proud of them.

Get it as an extra last-minute present to yourself.

And with that, please have a happy, safe and peaceful Christmas. I'll try and post something (lots to write about!) just before/after the New Year arrives, depending on ability to move out of dining-room chair, string sentences together, etc... Take care.