There are two parts to this post, really. The first is something akin to a review, I guess - while the second, much shorter section is more like an open diary entry. It would be lovely if you read both.

Matt Howden - a.k.a. Sieben - and Jo Quail take the stage at the tiny Lantern Theatre, a little way out from the centre of Sheffield. The setting is intimate - I think the Lantern holds about 80 people - and beautifully ornate, giving the impression it's been beamed into the present day just for our evening. (I am already on a kind of high, after hooking up - after far too long - with an old friend and his family now living in Sheffield, and bringing him out to the gig.)

Matt is clutching his violin and Jo stands behind her extraordinary electric cello. We can just about see the usual array of kit (mostly looping pedals) at their feet. What's unusual, though, is that they're both up there at the same time, about to perform as the duo Rasp.

What follows is enthralling: two musicians clearly on the form of their lives, testing their own and each other's creativity without ever losing sight of the need to involve and engage the audience. In the space of 40 minutes or so, they orbit around a contemporary classical sound - creating pristine harmonies, or at other times running so perfectly in sync that Jo will kick off a run of notes for Matt to finish off, or vice versa - but pass through a dizzying array of other touchpoints along the way.

Despite the use of loops, there's a level of improvisation that reminds me of some of the best free jazz, where the players' intuition is so finely-honed that you can trust them to take the music only to places you would want to go. On other tracks, ambient/drone and spoken word also put in cameo appearances, as the pair painstakingly build layers of immersive sound, seemingly out of nowhere, as if you'd convinced an entire string orchestra to have a go at performance art. And while the two of them can, and do, play with restraint and delicacy one minute, they also use Rasp to channel a harder edge - suddenly an industrial beat slashes through the small room, Jo lays down the heaviest of riffs, Matt solos over the top, and the band find a space somewhere between metal and electronica that causes some enthusiastic 'extreme nodding' (since a full-blown headbang is not really possible in the genteel confines of the Lantern's seating).

If it feels like I'm throwing arrows at some kind of genre dartboard, it's because when trying to describe music or sound you have to locate the best reference points you can. But the truth is that Rasp only sounds like itself. Whatever sound-environment Matt and Jo create from track to track, fast to slow, quiet to loud, vocal to instrumental ... the consistent thread running through the whole set is a shared instinct for melody and rhythm that hooks the listener from the opening notes and guides them unerringly through both familiar and uncharted musical territory. It's the sound of something you've never heard before feeling like the best thing you've ever heard.

Overall, the evening itself was something of a dream bill for me, as both Matt and Jo played superb solo sets before presenting Rasp. (Regular readers of the blog - thank you, darlings, thank you - may recall how I've tried to convey the magic of what they do individually in previous posts, but you can find more details here and here.) Neither of them betrayed any sign of nerves about the third act of the night (I'll come back to this). Something they do have in common - and I think this must be linked both to natural talent, obviously, but also to playing alone and operating pedals - is an intuitive and charismatic sense of stagecraft. Because they have to spend so much time rooted to the spot, movement becomes very important. There are few onstage sights more thrilling than Jo, eyes closed, broad grin on her face, stepping back momentarily, casting a stray hair from her bow then moving forward again to pick the tune back up in the space of seconds... or Matt, psyching himself up by whirling his bow on his fingertip, like a motor, as if giving him the energy to career around the stage for a few moments of freedom. The loops ensure that whenever they take off like this, the sound continues to swirl round them. It is as close to magic as music gets.

So I was intrigued to see how sharing a stage would affect them both. To the onlooker, Matt was stationed to the left and Jo to the right. I couldn't help imagining them carrying out a trial run on opposite sides, only to realise that Jo, in mortal danger, would be weaving and dodging Matt's circling bow ("you'll have someone's eye out with that", etc) and hastily swapping over. Matt was also controlling beats and recordings from a net book and spent a winning amount of time on his knees, essentially 'live-producing' much of the set. But what came across most of all - and you don't see this nearly enough in any area of live music - is the mutual respect they share and their joy in what they were doing. Clearly, near-constant eye contact is necessary when the material is so new and involves so much improvisation, but alongside that, I can't remember when I last saw a band smile this much. And far from excluding the audience, the creative rapport was infectious, making those of us watching - put simply - feel good: for ourselves, because we knew we were witnessing something new and exciting, and for Matt and Jo, because it was clearly hitting home, gradually, as the set progressed, that Rasp was succeeding in becoming truly special.

I've kept back till now a point of crucial detail about Rasp, because I wanted to find some way of conveying how captivating the music sounded, how fully realised, before mentioning that Matt and Jo had assembled Rasp's entire repertoire earlier that afternoon in Sheffield's Red Tape studios - in front of an audience, as well as streaming it live online. The vacuum wasn't total - both had brought ideas and song fragments to the session, and heard snippets of each other's material in advance - but essentially they had set themselves the task of putting an album together, each identifying the role the other would play in their tracks, in a single session. (This session was recorded, and you can watch it here. The combination of intensity, spontaneity and trust is already evident.) Looking at this, I'm reminded how the two of them could have taken an easier route - take some 'Sieben-style' songs and flesh out with cello, or add Matt's fiddle to Jo's instrumental creations. But they didn't. Instead of settling somewhere in the middle, they met up and travelled together to a different place entirely.

Rasp in its wider sense was born as a 2-day project, with the writing and performing scheduled for day 1, and the recording of the album - again, before an audience, in a small local rehearsal room and studio - for the following evening. Which brings me to... 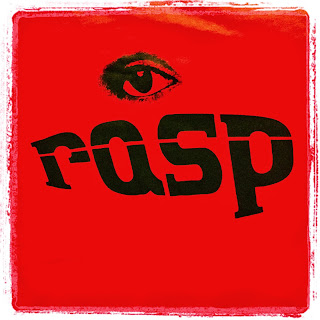 I was lucky to be among the invited audience to the album session, and the evening was just electric. The studio is underground, so players practice or record in semi-darkness under brick arches and low ceilings, making the Lantern seem to assume arena-like dimensions in one's memory.

In these conditions - a kind of pleasant, heady claustrophobia - Rasp took off somewhere else again, the on-stage chemistry still intact but if anything the pair gave even more confident and committed performances. At times it felt like we, the audience, were experiencing the same intensity as the performers, as this time we really were just a few feet away, half-familiar with the tracks, close enough to watch their feet work the pedals and gizmos as well as their hands fly across the strings.

It's at this point I should take off the 'review hat' and just talk briefly about the experience. You may have clocked, for example, that I don't normally talk about gigs in Sheffield, and that this was a little out of the ordinary.

So, I want to say thank you so much to Matt, Jo - and Jo's manager Alan - who invited me along to share in the Rasp extravaganza. It's a terrific thing, to talk to people - whose music means so much to you - after gigs and get some insight into what they do. But it's a privilege - it really is - to then be asked to see something like Rasp at first hand, taking flight before my eyes and ears. And while I was there, they looked after me brilliantly. I was touched and totally enthralled by the whole event, and I'll never forget it.

Blogging, for me, is almost exclusively a upbeat activity - spreading the word about anything I enjoy and want to share. But there could hardly be anything more positive to write about, than when folk you've been friendly with for a while, and admired for even longer, take their place comfortably among the best people you know.