This could be the strangest gig I've been to in a long, long time. Perhaps you've been aware for some time (unlike me, sport bumpkin that I am) that some of the countries competing in the Olympics have taken over various bits of London for hospitality/PR purposes.

Which is how Mrs Specs and I find ourselves in the 'House of Switzerland', which is not strictly what I'd call a house. It is in fact, an entire stretch of road between Southwark Cathedral and the Thames, running under one end of London Bridge and out the other side. (The House of Switzerland banners announced it was 'open to the public' for the duration of the Games. It's open to the public the rest of the time as well, you clots, it's a street. Gah!) The nerve centre of the set-up is the Glaziers Hall, where there's a proper lounge for the big of wig, a posh restaurant and a fabulous poster exhibition. Mooch around the block, however, and there are temporary shops, more eateries and - most importantly - an open-air stage and courtyard.

Swiss bands are taking over the stage each night to play free concerts. I've made the pilgrimage here to listen to Nik Bartsch's Ronin, who are playing two sets, one at each end of the evening. We just had time to grab some Helvetian cuisine before the first note was struck... (Foreground: rosti with mushroom sauce - background: bratwurst. 1.5 cardboard plates of YUM!) 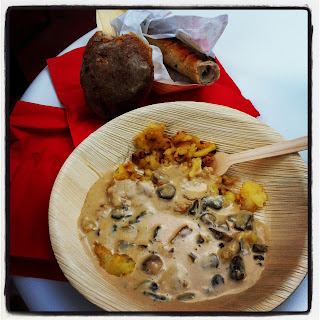 Summing up Ronin in a few sentences is not easy. Bartsch, the band's composer and mastermind, even made up a name for his single-band genre: ritual groove music. Resist the urge to dismiss that as too pretentious, because as a description it's quite accurate. Ronin record for ECM, and in some ways they resemble an 'ECM band' (glacial Nordic-style jazz), but with a few more vitamins. Bartsch's compositions (which he calls 'modules') are numbered rather than named, and they all seem to have a carefully worked out structure and, above all, the repetitive, watertight groove the self-coined genre name suggests.

The cumulative effect they build up over a live set is like listening to pieces in a musical jigsaw. Benefiting from a percussionist (who stole Mrs Specs's heart, the cad) as well as a drummer, the music is arguably more akin to funk than jazz - until you factor in the tricky time signatures, and the telepathic understanding the band seem to share. In fact, I have never seen a group make so much eye contact before.

We bumped into the percussion chap between sets and Mrs Specs - keeping it together - asked him how much was carefully worked out and how much improvised. He said, in carefully measured English (possibly in an unusual time signature), 'We play. A lot.' 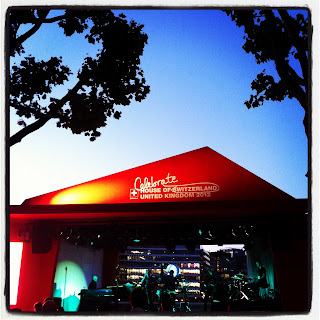 The end result is both hypnotic and surprising, as if they can lift you momentarily back out of your trance, then ease you back into it. Here is an epic video of them from YouTube - I know it's far too long to give people a 'quick taster', but the gradual build and incredible beat make posting it irrestible. Play, and if you have the time, stay.


And how could I have got this far without mentioning: 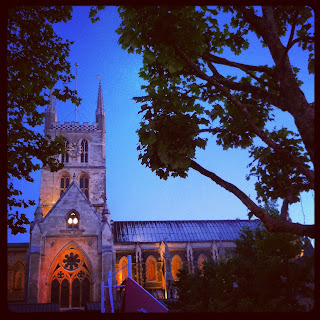