Just back from a long weekend in Scotland with the McInlaws (and Mrs Specs came too, obviously - I'm not that strange), which means this is my first opportunity to jot down a line or two about the Proms I went to last week. That is a deliberate plural - we'd booked two. We've actually lined up quite a few Proms overall - not that we need any excuse, but you have to book a certain number of concerts to qualify for the ballot for 'Last Night of the Proms' tickets. (And we were successful - yay! - although at the rate I'm going I might end up blogging about that in 2015...)

The first Prom of the two was a bit unusual. It revolved around a performance by the fearsomely talented - and frighteningly young - pianist Benjamin Grosvenor, playing Saint-Saens's 2nd Piano Concerto. I'd loved the Saint-Saens chamber music that I'd heard, so I suspected I would enjoy this - and I was right. Grosvenor's playing is sublime - he glides across the keys with such facility that you don't really get any sense of his fingers depressing each note. Instead, it's as if his lightest touch can make the instrument ring out - crucially, no matter how fast (and some of this is FAST) the music demands. The concerto came just before the interval, so Grosvenor had time to encore with a piano transcription this time, still of Saint-Saens - a brief, delicate piece called 'The Swan'.

I've since realised - having purchased the CD in question - that Grosvenor's appearance was timed to promote his new record, which leads off on Saint-Saens - both concerto and encore. This might explain the rest of the Prom, which was pleasant but odd. It began with a 20-minute piece by Delius, called 'Paris: the Song of a Great City'. To me this sounded a few decades ahead of its time, in that it reminded me of an overture to an MGM musical or similar. Bustle! Then quiet! Then skitter! Noise! Peaceful! Uneasy! Then elegiac... as though we were hearing snippets of what would be proper pieces of music later. But without the later. I don't know why this slightly spoiled my enjoyment of the piece. After all, I don't moan about overtures to musicals, some of which I find awe-inspiring. Or side 2 of 'Abbey Road', for that matter.

Does it have a name, this feeling of being fed-up with something that pre-dates a cliche, purely because you've since been subjected to the cliche? Retrojection?

I think I just really wanted the whole evening to flow - and the Delius didn't. After the interval, we heard Tchaikovsky's 5th Symphony - or, as our classical music buff companion described it, 'Tchai 5', which to me sounds like a spaceship or a planet. That aside, I still hated myself as, even while I enjoyed every last note, I was secretly wishing that we could have kept going with more Saint-Saens, more piano, more Grosvenor - why couldn't he just have played and played and played?

Two nights later, we were back for three Vaughan Williams symphonies. Apparently these are going to be repeated on Radio 3 on 31 August, so please please please listen if you can (or pick the broadcast up on iPlayer when it appears). There was too much music here for a novice like me to write about successfully, but the single, key point is: it's not what you think.

Vaughan Williams is probably best known for relatively friendly fare like 'The Lark Ascending', or his work based on folk music and Christmas carols. Clearly the symphonies are his picture in the attic, on this evidence. He seems to have poured into them dissonance, experiments with form, in fact any tendencies towards the avant garde you imagine he might have mustered and elsewhere suppressed. Here the programming really worked, with the unsettling 4th moving into the more 'as you'd expect' 5th Symphony, which contains a famous Romanza that must be one of the most purely moving pieces of British classical music ever written. That led us, false-sense-of-security style into the interval, then back for the 6th, which has a reputation - denied by VW himself - for reflecting the Second World War (only just over when the symphony was composed) in its noise and pace. All four movements run together in a sequence - is all classical music like side 2 of 'Abbey Road'? - and amid the carnage, a lone tenor sax takes centre stage at one point, supposedly to symbolise the Parisian jazz clubs that vanished in the face of occupation.

This is rebellious, difficult and disgruntled music. There are moments of pure loveliness - especially in the 5th symphony - but as often as not, they are the calm in the middle of the storm. Recommended!

(And PS! - a hello to pals JoLean and Doods - lovely to bump into you, compare notes, and make for the Tube together after the VW Prom...!) 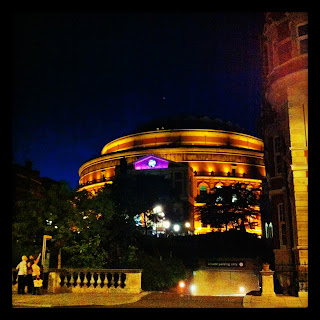