Bauhaus at the Barbican

Help! It's all happening at once! Sneaked in another couple of exhibitions today and to my horror, I realised that one of them - 'Bauhaus: Art as Life' at the Barbican, London - actually closes next weekend. This is the kind of exhibition that I would be running around telling everyone I've ever met to try and see, but I've left them no time to get there. (I had been um-ing and ah-ing about it myself, until I was prompted to 'haul ass' by a rabidly enthusiastic tweet about the exhibition from Jude Rogers, a writer I totally trust.)

So - just on the off-chance that any of you are in the London area over the rest of this week and have a spare hour or two - one quick shuffle of my 'art-a-thon' running order later, and here follows my earnest plea for you to catch this if you can.

I'll try and keep the historical background really short, because it can all be looked up and explored if you fancy. In a nutshell, the Barbican calls the Bauhaus the 'world's most famous modern art and design school'. It was founded in Germany, in the aftermath of the First World War, with the aim of fusing the artistic disciplines with practical living and mass production. It survived for fourteen increasingly bumpy years (govenments withdrawing arts funding! - couldn't happen here) until finally closing in the face of the unstoppable rise of Nazism.

For someone like me, who knows 'a little bit about some art', an exhibition like this acts as some kind of magic thread, that locates the tiny nuggets of knowledge and appreciation nestling in my brain cells somewhere and with a quick tug, links them all up. It was a mind, as well as eye, opener.

An example - Kandinsky, whose art I had only previously encountered by itself. Abstract, vibrant, attractive. Turns out he was in the Bauhaus - and I now find that his art has its context in colour charts and composition for all sorts of practical uses (architecture, decoration). Students would make balanced models to see how some of the gadget-like shapes in the pictures conjured up by their fellow artists would cope if realised in 3D.

Driven by the school's objectives to shape modern living (and make/sell enough stuff to stay solvent), these fiercely innovative artistic minds turned to everything from typography to teapots to tapestries. My favourite product had to be the chess set, where each piece is not only a glorious example of minimal design, but also a guide to how it moves. I've included an image of it here, taken from a marvellous post by a chap called Brad Woodard - you should definitely link to it if you like ogling this sort of thing for any length of time. (In fact, the whole Visual News site looks well worth having a root around.) 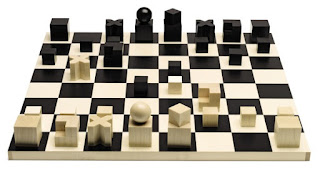 Like stumbling across an album by - well, I don't know, the Velvet Underground, maybe - where you can hear the music sow the seeds of hundreds of bands to come ... In this same way, so much of the work in this exhibition seems to breathe life into everything that followed. Clean, bold graphic design. Elegant, yet functional furniture. Performance art and surreal stage dressing. Trick photography. The Bauhaus must have been a crucible of creativity.

So much so, in fact, that I was genuinely relieved to see one of the fascinating reportage photos in the gallery simply feature one of the students lounging back in his comfy chair with the paper. That's more like it!

Check out the website and its selection of images here. Then GO! 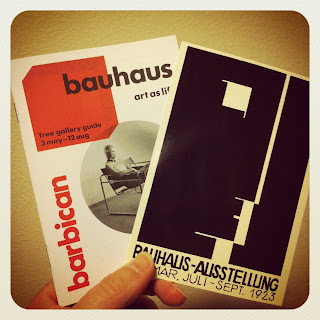