A Tate in every town. (Nearly.)

Blog Health Warning: this could be a bit long. I mentioned a few posts ago that I was embarking on a bit of an 'art-a-thon'. I think the only way I'm going to manage to blog about any of it is if I try and round at least some of it up, almost as a bit of a tour report. So here goes.

In the past few weeks, I've been to the Barbican Gallery to see Bauhaus - which I've already raved about - and the Bond movie exhibition. (Not sure this latter one is quite 'art' - more 'show' - and I'll try and tackle that another time. Sorry, M. Don't let it happen again, 007. Etc.)

However, in the last few weeks I've also managed to cover three Tate galleries: St Ives (where Mrs Specs and I had a mini-break a couple of weeks ago), Modern, and Liverpool (thanks to a flying day trip last Saturday).

The pilgrimage to Tate St Ives was to see an exhibition by possibly my favourite living artist, Alex Katz. There are so many things I love about this artist - where do I start? I know - with a list! 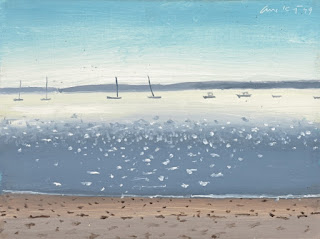 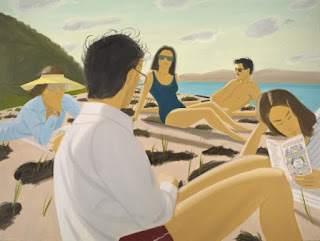 Perhaps the thing I love the most about Katz is how much he clearly adores his wife. There she is, in the middle of the group above. Alex met Ada in 1957. He has been painting her ever since, and I find some of his portraits of her so lovely - his signature style such a great match for her strong, dark looks - that they make me want to shout with joy. This link will take you to one of my favourites of these portraits - 'Blue Umbrella' - I've not reproduced the image since it isn't in the Tate exhibition - and I would like you to follow the lead to Wikipaintings so you can browse more of his stuff if you so desire. (In particular, the thrilling 'Red Coat'.) Plus the exhibition is moving to a different coastline in October - to the Turner Contemporary in Margate. Please go if you can.

Back into the smoke and to the Munch exhibition at Tate Modern. Munch was not, on the whole, making paintings designed to make me feel good. There is the backstory if you want it - mental illness, alcoholism - but I found the exhibition, which seems to have a kind of 'there's more to all this than The Scream, you know' fearlessness about it, strangely uplifting.

One reason for this, I think, is that when a hefty selection of his art is shown together, he seems more of an innovator than, well, a hatstand ghoul. One room is devoted to showing how he fixed upon certain themes and developed them over time, presenting his progress as logical rather than maniacal. Another focuses (!) on his interest in photography, particularly self-portraits. Amusingly, instead of rigging up a complex self-timer set-up, he was happy to hold the camera at arm's length and photograph himself - as the exhibition points out, in much the same way that people do with compacts or camera phones today. In other words, you're basically seeing Munch larking about. Who'd have thought? And yet another section of the exhibition looks at his experiments with perspective (ok, so they feature folk on operating tables and a murderer running away from a dead body, but each to their own).

I felt like I was viewing the work of someone who wasn't exactly at their wit's end, but who could quite clearly see their wit's end on the horizon, just waiting for them to get there. Grim in places, euphoric in others - but always fascinating. 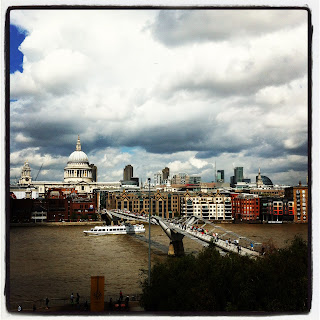 Finally, to Tate Liverpool, to see one of those exhibitions where they show a few artists alongside each other and run their names together: in this case, 'Turner Monet Twombly'. The first two are unlikely to need any introduction, but I suspect Cy Twombly is more of a mystery to some. He was a major contemporary painter (he died just over a year ago) and I have to admit, what work of his I've seen I've always found particularly challenging. (Again, go to Wikipaintings for a look at some of them.)

In some ways, he fits that cliche of making work that appears to require no skill (it's squiggles, lines and splashes). I'm actually all for that sort of thing. But I struggle to find the ideas behind it. And placing him in the company of this particular pair does him one great service amid untold damage. It seems clear from this collection that Twombly loved and admired both Turner and Monet, and at face value, we are shown explicitly how he incorporated inspiration from Turner's mythological works and Monet's water lilies into his own abstract versions. But why? To me, the visual 'hooks' are pretty much absent. The title of the picture, and the notes from the exhibition, basically had to TELL me how to understand the paintings. Without these prompts, I would've been totally lost.

I actually rather regret the way I came out of an exhibition like that thinking the 'greats' WERE great (although I'm more of a Turner man than a Monet worshipper) and the upstart disappointing in comparison. I thought it would enhance my appreciation of all three. And I liked a couple of the Twombly pictures, purely on their own terms - the colours he chose, and where he put them. I can understand that all by myself. But too often, I couldn't see any colour, and I couldn't work out why it wasn't there.

Still. Never mind all that art! Look out of the WINDOW!