Those of you who keep an eye (probably from a safe distance) on the music, photos etc that I place on Facebook, Twitter and the like will probably know the name Janice Whaley already. If I keep posting her songs - and I do - it's because I think she's genuinely extraordinary. And now I have a blog, I can go into more detail about why. (Mu-ha-ha, *twirls moustache*, *ties wife to railway line*...)

I won't include too much biographical detail here, because Janice has written and blogged extensively - and fascinatingly - about how she got started on her highly individual way of making music. Suffice to say, that when she decided to give it a try, she was armed with two key weapons: a gorgeous and heroically versatile voice, along with a devillish way with a laptop home studio.

The voice is crucial, because Janice's speciality is 'a cappella' - that is, music performed without instruments. Some of you may think of barber-shop quartets, others human beatboxes. This is something else entirely. Giving full reign to her genius for electronica, Janice bends, shapes, loops and layers her voice into an orchestra - to the point where, even though you KNOW the sounds you're hearing are all vocals, you just can't quite believe it.

Rewind. The catalyst that turned Janice from the singer in her head to a real-world recording artist was basically a Really Big Idea: The Smiths Project. The Smiths were and are her favourite band; it's impossible to tire of their music. Luckily. At the start of 2010, Janice set herself the target of recording every Smiths song by the end of the year - blogging as she went. The backstory was gripping enough (hours of painstaking labour at the laptop while trying not to let her three-year old boy out of her sight; getting laid off work - making valuable time available while taking precious funds away) - but without trivialising the hair-raising times Janice went through, none of that was as riveting or addictive as the music. Particularly since she did it. The achievement is staggering. 71 songs. 1,300 hours of work, building songs with up to 50 layers of vocals. I need a lie-down just thinking about it.

'The Hand That Rocks The Cradle':


If you are a Smiths fan, you can get even more out of The Smiths Project by listening to it in order. Although she always had a number of songs on the go at any one time, Janice 'released' them more or less in the same sequence as the band did first time round. All the elements were fully-formed from the outset - but you might feel that the emphasis early on is on the sheer beauty of the voice, gliding across the massed backing vocals to create something otherworldly from The Smiths' classic realism. But as the number of songs builds up, the sense of adventure and mounting confidence grow, audibly, into real virtuosity. I've linked to a couple more selections here - one for creating such a great groove, the other simply for putting such versatility on display: the audio equivalent of saying, 'THAT is how we do that.'

'Shoplifters Of The World Unite':


'A Rush And A Push And The Land Is Ours'


But you need to listen - and if I'm honest, buy - the whole thing. How are you going to manage without the other 68 tracks? See - you can't.

With that Herculean task completed, Janice moved on to her debut album of originals. Building funds - and a fan base - through Kickstarter, she e-mailed some preview tracks to those of us who had decided to pledge some money to back the album. Nothing in the Smiths Project had quite prepared me for what I received. The approach was largely the same - some sampled piano now featured but essentially the tracks were still constructed from just Janice's voice. But one thing you couldn't have necessarily foreseen from an opening gambit of 71 covers - we clearly had a born songwriter on our hands as well.

'Patchwork Life' is made up of songs based on real incidents and events in Janice's life, and the artwork is created from a series of embroidered graphics Janice designed for each track. The universe of her own music is in fact a world away from that of The Smiths. Most of the songs stretch out for 5, 6, 7 minutes, building layer upon layer, constantly shifting, keeping (with a few exceptions) to a steady pace. As if saying 'other influences are available', the album manages to remind this listener of all of the following, at once: 'glitch' electronica, dance/trip-hop, minimalist classical music, the '4AD sound'; vocally, Janice has already been compared to Kate Bush, but I think that sensuality is also blended with a frank, assertive quality (not to mention a harmonic gift) that I hear in the late Kirsty MacColl. (And what better combination?)

But for all that, 'Patchwork Life' doesn't really sound like anything or anyone else. Its influences are important - no-one creates in a true bubble - but it leaves them behind. Every single track is spell-binding - and I chose that word carefully, to mean that each song can stop you in your tracks and entrance you. Nobody else out there, as far as I know, is putting together records quite like this. So, all I can do is keep telling people about her.

Here is Janice's official website, where you can read, watch, listen and BUY to your heart's content. 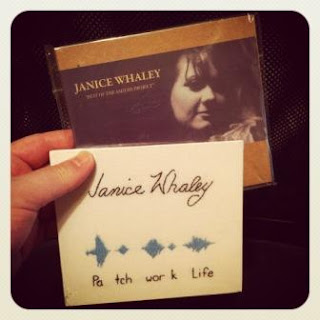