Fortunately, the forecast was good, as this was my second outdoor gig in the space of a week - and at the first, the weather had not been kind. This time, though, in Hyde Park for Paul Simon's Graceland anniversary concert, it all looked much more promising.

For a start, I was with some great pals. Secondly, I had managed to get a Graceland T-shirt in XXL size. It is surprisingly hard for the larger gentleman to find robust garments at rock concerts, so I was overjoyed. Having got home and unfolded it, I see the irony is that you could probably fit an entire Paul Simon inside one of these, but there we are: it will do me very well. 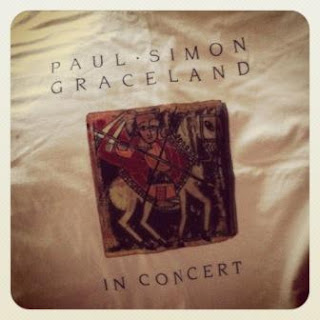 The main support act of the night was Alison Krauss & Union Station. If I had been them (*deluded expert face*) I might have played a few faster numbers earlier on in the set - it's a big crowd to manage - but they won everyone over anyway, simply by being such fantastic musicians. When Krauss performs with Union Station, it's a bit more democratic than you might expect, and Dan Tyminski, her co-leader/singer, steals most of the glory. They perform 'Man of Constant Sorrow' from 'O Brother, Where Art Thou?' (DT is the 'real' vocalist for George Clooney's character), and Tyminski even gets his festival moment as he sings a lyric banishing the rain, and the sun emerges at that exact moment to bathe the stage in bright light.

Paul Simon himself - well ... is it too early to think this was one of the best gigs I've ever seen? I'm always a bit wary of that short-memory elation, but the thing is, these songs are not new. I've lived with most of them for many years, and seen Simon perform a lot of them live already, just the once. (In Wembley Arena on the Born at the Right Time tour. I'm not sure Wembley Arena counts. It's like saying you've seen someone live, in an empty factory, with a blindfold on, wearing ear muffs, in a nightmare from which you cannot escape.)

Justly or otherwise (and maybe more from interview than performance), I had formed a certain impression of Paul Simon. As much as I love his music, and I REALLY love his music, beyond reason where some songs are concerned - I'd decided he had two slightly dodgy character traits: no sense of humour (at least, not outside his often witty lyrics), and an aloof, egotistical air. Well, I might have been wrong then and I'm certainly wrong now. This was a different bloke. 1: He was having a brilliant time - which meant we did, too. 2: He was a heroically generous host.

The gig was packed with special guests. Jimmy Cliff - bit of a wild card but it worked - came on to sing extraordinarily powerful versions of his big hits and duet on 'Mother and Child Reunion'. Then, as the Graceland material emerged and the original band took the stage, Ladysmith Black Mambazo and Hugh Masekela each got to perform some of their own material among the Paul Simon numbers.

While the chance to hear more or less all of Graceland live was the 'selling point' of the gig, the album was broken up and dotted about a genuinely hits-packed set. I can't imagine anyone with the slightest interest in Simon leaving this gig disappointed. We got to hear a gorgeous version of my favourite, 'Hearts and Bones'. But we got to hear your favourite, as well. 'Me and Julio', 'The Obvious Child', '50 Ways', 'Slip Slidin' Away'... even the encores conjured up 'The Sound of Silence' (solo, acoustic), 'The Boxer', 'Late in the Evening' and 'Still Crazy'. I could've cried.

Although extra points to the woman next to me (NOT one of my party) who chose the precise moment after the lyric 'no-one dared disturb the sound of silence' to blow her nose loudly into my left ear. If there's one thing that song doesn't need - especially unplugged - it's a monumental 'PAARRP!' between verses. Just goes to show though, that however left-field your attempt, you can't improve on perfection. 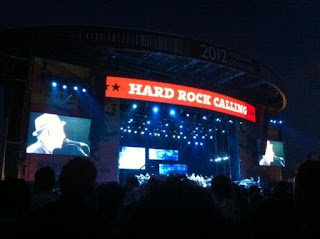