Scuttling around in my music den, digging out unjustly-neglected CDs and conjuring up playlists - you have to understand that even though I'm 39 years old elsewhere on Earth, in here I'm about 15 - usually results in my stumbling across an album or two that I'm horrified I haven't played for so long.

Tonight I've been looking for tunes to recommend to a friend who has a fantastic voice. Don't get me wrong. I'd be quite prepared to push Public Image Ltd, Billy Bragg, or a healthy selection of grindcore in her direction - I have quite a thing for 'extreme'/'intense' vocalists, but that's for another time (and another post). I felt like I needed a more sensible starting point. Who, I began asking myself, are the great voices in my collection? And are any relatively, if you'll excuse the pun, unsung?

I've ended up with several names to include, and I could happily write about any of them. Opinions would no doubt differ wildly over whether they are obscure or not, and in what context. (Let alone whether or not they are 'great voices'. I think they all are.) Mark Eitzel? Both Lisa Gerrard and Brendan Perry of Dead Can Dance? Chhom Nimol of Dengue Fever? Even one of my personal faves, Gary Brooker of Procol Harum?

But the very first name that popped into my head - and I think the one most deserving of being more widely known - is Sally Timms. Perhaps you are most likely to have come across her as a member of the Mekons, that most unusual of bands - a punk outfit from Leeds (formed in the late 70s), now resident and still active in Chicago, and always sounding like the precise - and unique - collision of punk and alt-country you might imagine that geographical mix could produce. The Mekons share lead vocals between themselves like sweets, but the Timms tracks on each album tend to stand out purely because the world stops when she sings. Pitching a voice of such purity against the bite, whirr and jangle of the band's sound is the key to their genius. Try 'Ghosts of American Astronauts'.


She has a parallel solo career, but it is the dictionary definition of 'low key'. To my knowledge, her last album came out in 2004. The one before that, 'Cowboy Sally's Twilight Laments...for Lost Buckaroos', as the name 'might' suggest, is a country album. 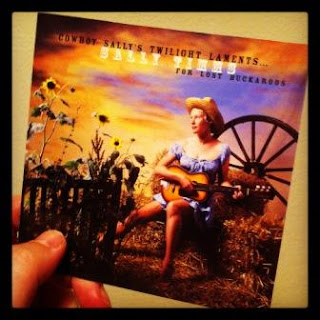 Nothing very 'alt' about it - there's no need. The arrangements are largely gentle and always sensitive, ensuring That Voice is the centre of attention at all times. This track, 'Cancion Para Mi Padre', is one of my desert-island songs. If the chorus doesn't make you sigh with pleasure, I will sit you down, make you a cup of tea, then pity you*. (*offer you a biscuit)


I have two Sally Timms memories. The first time I saw the Mekons, they had just published a lovely hardback book of lyrics. Although I've never really been that good at approaching my idols, I decided that since the band seldom play the UK, this would probably be my only chance for years to gather their signatures in the book. Sally was sitting at the merchandise stand when I bought my copy - she not only signed it, she started yelling around for the others to come and do likewise. (Although I had to track down the odd Mekon after the set, I got hold of all the signatures and I cherish the book to this day.)

The second time I saw the Mekons, they weren't quite as 'on form'. They still made a great noise, but couldn't live up to the 'crack unit', top-of-their-game performance they gave the night they signed my book. (Not that I'm claiming any credit.) Launching into a Timms track, she gave the band about a minute before turning round from the microphone and silencing them. She explained to them - her voice still audible to us through the mic - that it was too loud. The audience want to hear the song properly. Play it more quietly. So they did.

Here is a bonus track of Sally Timms singing a duet with fellow Mekon Jon Langford. It's called 'I Picked Up The Pieces', and is a perfect musical expression of rough and smooth.