Fugue, that was close

Back to the Proms, although not the Royal Albert Hall this time - instead Cadogan Hall for a Saturday matinee. This was a performance of wig-on-legs J S Bach's 'Art of Fugue', in a new arrangement for a chamber ensemble of about 15 players - here, the Academy of Ancient Music.

The 'Art of Fugue' itself is a bit of a weird one. It consists of about 20 - *consults Wikipedia* - 19 pieces which together represent a kind of masterpiece of relentless experimentation. Bach apparently took a central idea and pushed it through as many variations and complexities as it could cope with. The short sections become increasingly intricate - not in the sense of adding more players, necessarily - more about that below - but in the dazzling, and dizzying, ways the various themes shift and intertwine.

The bloke who did the arrangement, Mahan Esfahani, was 'directing from the harpsichord'. Thrills! Sadly, this didn't involve any precarious balancing or stuntwork, but was quite exciting nonetheless as he would polish off a spectacular trill of notes then leap to his feet to point at people. Excellent work.

And it was only as the performance progressed that you realised what he'd achieved. The 'Art of Fugue' is one of classical music's enigmas. Its manuscript shows the melodies quite clearly but there is no recorded instrumentation. In other words, no-one knows what it's supposed to be played on. The best guess appears to be a solo keyboard of some description (Bach has form on this - 'The Well-Tempered Clavier'), and here I really do recommend the Wikipedia entry if you like classical music, and thorny conundrums. Assuming it's all true - and I can't help but think that manic internet saboteurs aren't going to make a beeline for the 'Art of Fugue' entry - there is a really compelling case for the 'solo keyboard' argument: simply that it's possible. (Most of Bach's pieces intended for an ensemble can't be transcribed to keyboard. Case rests, m'lud. Nice wig you have there.)

The entry also includes a huge list of recordings, showing the sheer range of instrumentation people have used to tackle the suite. You'd expect piano, organ and harpsichord. But perhaps not saxophone quartet (twice!) or an electronica version. Even Laibach have had a go!

Actually, someone making the electronica link doesn't surprise me at all. This kind of Bach has that strange quality of seeming infinitely melodic without really presenting the listener with what you'd call A Tune (textbook electronica, and I say this as a fan). The truth is there are lots and lots of tunes, mostly going on at once. It's sublime, pleasant and life-affirming, but also quite demanding and strange, because the bit of your brain that can't relax is constantly trying to process what's happening. I caught myself with a furrowed brow and a grin, simultaneously, more than once.

Esfahani had decided to orchestrate the pieces with a real variety of instruments and use them in different configurations. Very clever indeed. I think you'd have to be quite a connossieur to listen to this piece (about 75 minutes without an interval, as I became particularly aware, following a pre-concert pint of Doom Bar) played straight through on a single instrument, but as we were treated to extraordinary varieties in light and shade, it all felt much more accessible.

Particularly pleasing - given how demanding the piece must be - was the amount of smiling on stage. The players positively beamed at each other throughout, and almost started chuckling at the good bits. They're also, for want of a better word, athletes.

1) The first violinist played an especially impressive flourish with - honest - a rather suave shimmy at the hips, and then a rather less suave tiny bounce on tiptoe. More of this sort of thing.

2) For 'authenticity' (pah!), the period versions of cellos (proper name: 'viola da gamba') don't have spikes. Viola de gambists - possibly not the right term, that - have to bend their ankles rickets-style and cradle the instument between their legs with no support from the floor. This is cruelty. The spike has been invented! Let's not pretend it hasn't been. Restore the spike! It's like when you peel a price sticker off a nice new CD, and gunk gets left behind. The removable sticker HAS BEEN INVENTED! Why use non-removable stickers now?! Where was I?

3) One gambist played by bowing 'underarm'. Not easy to describe - think of the way a drummer holds the sticks when doing a roll, rather than just playing a pattern. (I tried Googling 'bowing underarm' and got a YouTube video of someone's armpit and a website headlined 'Yes There Is A Bra For You' - so whatever this technique is, it's got a different name.) This guy was expending some physical effort in sawing across his strings like that. It looked really awkward, which makes me think that there must be a technical reason for it. I will try and find out.

If you can access the iPlayer in the next week, give this a go. Even if you're not big on classical music, consider it if you like riffs, mantras or patterns in your listening choices. You might get hooked. 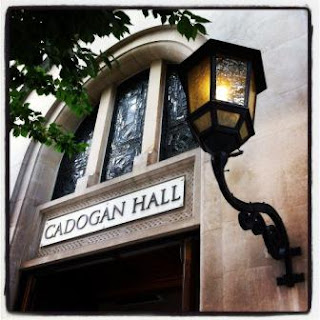