Further reason to hang out the bunting: long-standing Specs favourite Matt Howden - a.k.a. Sieben - has returned with another leftfield, left-turn of an album, '2020 Vision'. As so often, the fundamentals are much the same... a few guest contributions aside, he works with only his voice, violin and a loop station placing a range of electronic effects literally at his feet. But yet again, from these apparent limitations comes an unexpected, unpredictable record. It clearly fits snugly into one of the most stubbornly original bodies of work I've ever come across - but it's a knotty, thorny beast: provocative yet endearing, funny but bitter, pushing you away while winding you in.

When writing about Sieben, it's always tempting to try and tell the entire history: the development of the 'dark folk / pastoral' sound in the earlier, more bucolic masterpieces like 'Sex and Wildflowers' or 'Ogham in the Night'; the ramping up of intensity in records like 'Desire Rites' or 'No Less than All'; the more expansive, searching soundworlds of 'Each Divine Spark' and 'The Old Magic'. I won't attempt to do that here, apart from to say that the characters of each album dovetail around each other to make the overall canon rich in surprises: the most intimate can also be the most chilling; the most aggressive also the most rousing. What I find endlessly fascinating is how each new album - and this certainly applies to '2020 Vision' - picks up the bow and runs with it, bringing forward some of what's gone before but always through a new lens, from a new angle. 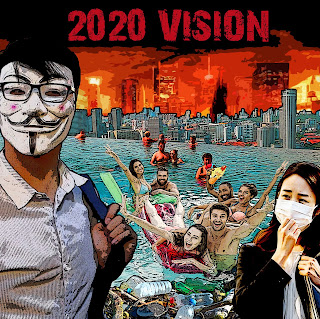 And this time, importantly, with a new instrument. MH now wields an electric Kevlar violin with five strings (one louder!) - so there's additional heft to the riffs, beats and basslines without sacrificing the scarily agile, on-the-brink-of-chaos melodies and solos on the top. This is particularly appropriate, given the raging subject matter.

I think it's fair to say that for all the musical volatility over the years, '2020 Vision' does continue perhaps the longest identifiable Sieben 'phase' since the folkier days: these are the protest years. 2018's 'Crumbs' and follow-up EP 'Kickstart the Empire' found Sieben ignited by horror and indignation at the surrounding political mess, and the new record continues to mine this seam of outrage, with its searing climate warnings foreshadowing our current nightmare scenario with uncomfortable prescience.

If this all sounds unbearably gloomy, think again. To begin with, the album is suffused with bone-dry humour, and MH's undimmed gift for phrases that meld the sing-song with the sinister: song-titles include 'Enzosonbenzos', with its chant of 'Milk-turned-sour happy hour' nailing small-town immigrant disillusionment, and 'Berylsinperil' - rhyming 'this sceptred nan' with 'mouldering flan'. The final two songs pitch the 'cult of blight' against the 'cult of light'. This facility with chiming language - perfect for songs that by definition loop around themselves - has been a constant feature of Sieben music and converts even the most sobering track into a pleasurable earworm.

It's also an unapologetically eccentric set, paying homage in places to an object rarely seen these days: the comedy album. Amid these deadly-serious lyrical concerns, we hear occasional snippets of conversation between player and violin - christened 'Kev' - who has acquired his own mournful personality and willingly undermines his owner at every opportunity. Sieben records often feature 'meta' moments which look inward at the creation and construction of the songs, and this is the most irreverent, puckish treatment of that yet. (Long-time listeners will perhaps see an ancestor for this album in the mighty 'Desire Rites', which - spoiler alert! - featured Matt breaking into a less clearly-defined alter-ego and tear down his opening track a minute in. And the album features at least one other sonic 'Easter egg' for the veteran, as the final track ushers in the 'Sun divine', in rather different circumstances from its use in the 'Ogham' days.)


If Kev's occasional bon mots sometimes call to mind a defiantly morose take on skits spliced between tracks on a hip-hop album, that's no bad thing. Many of these tracks typically feature propulsive beats that come close to techno, with choppy, agitated violin - almost seeming to sample itself at times - pushing against some of MH's most accomplished, impassioned vocals. Examples of this include 'Reckoning Beckoning' (again, that sing-song tone), and 'The Darkness You Have Drawn', where the layered bleeps and blasts pack the song to near-overload.

At other times, the brakes are temporarily applied, with no loss of impact. The video in this post is the lead track released from the album - it's called 'Death Tape Updated for 2020', and in its intro may remind some of the slower-burning, abrasive majesty of the 'Old Magic' era material. But this is a leaner, meaner model, the slinky bassline playing against the keening voice ('If you knew what was ahead of you...') to create something of a haunted groove. Cut from similar cloth - appropriately enough - is 'Shirt of the Apocalypse', a more hesitant doo-wop paced shuffle as the lyric laments our banal acceptance of disaster ... as well as the masterful 'Vision', built around a stunningly-wrought figure that somehow makes a doom-metal riff natural bedfellows with a rising, splintering line of fiddle.

It's a record full of anger and anguish, clearly sincere and genuine - but still delivered with utter musical sure-footedness, confident, even militant in its originality and flair. Still a unique vision.

Buy '20:20 Vision' - as well as the whole back catalogue (and if you want any recommendations, I'm your man) - at the Sieben Bandcamp page. Download only for now - physical copies should follow once they are easier to produce. This can only happen with listener support - so please do so.
Posted by Adrian at 10:52