A really encouraging, uplifting development today, as Wigmore Hall's Director, John Gilhooly, announced a series of lunchtime concerts, starting on 1 June and then every weekday at 1pm until the end of the month. Obviously, many of the people I know or follow on social media are musicians, music writers or dedicated listeners - so it was heartening to see my phone continually alive with the news as the word spread.

Of course, these are not gigs as we understood them in the days BC ('Before COVID'). The performers will sing and play to an empty venue. Only the tiny number of people needed to make the technology work will be there with them. Instead, the remote audience can tune in live to watch and listen on the Wigmore Hall website feed, or choose an audio-only option on BBC Radio 3.

I admire the quiet genius of this idea, which might never have arisen with a different combination of boss and venue. A chamber auditorium with a heavenly acoustic, the Wigmore is almost tailor-made for socially-distant performance. After all, for many of its concerts, only one or two people occupy the stage anyway, even when there isn't a pandemic outside to worry about. And while the WH is hardly unique in having form with radio broadcasts and live streams, their relatively modest and flexible set-up means they're essentially 'ready to go', with all the tech - from piano to cameras - in place.

Wigmore's 20-gig series (with hopefully more to follow) features a stellar line-up - check the website here for the full programme. 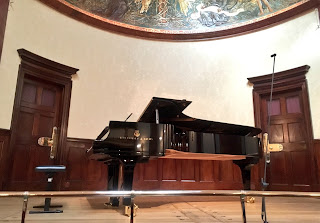 Lockdown has resulted in some interesting developments in music-making. Some musicians who perform solo have given generously of their time and talents online, allowing us glimpses into their homes and music rooms. These have often been brilliantly intimate, casual affairs, while still musically transporting and emotionally resonant.

At the other end of the spectrum, some ensembles have been spurred onto astounding technical feats to get round the fact they can't actually meet. These 'isolation' performances - such as the ongoing 'St John Passion' from Oxford Bach Soloists and multiple friends, or on perhaps a more showbiz-bonkers scale, the orchestral segments of the recent online Met Gala - can only be realised through painstaking efforts not just on the players' part but in the production, mixing, visual design, and so on. Stile Antico multiplied themselves into a 40-strong choir for an astonishing version of 'Spem in Alium'. Watching some of these, I've found myself tearing up... and at first I thought, 'well, we're all fragile at the moment - and let's face it, live music is the thing I most miss'.

Now I actually think there's more too it than that. Obviously, it's awful for me, not being able to go to concerts, and be in the same room as the musicians I admire, sharing the live experience with a like-minded audience... and it's far worse for the performers, who obviously miss all the stuff I do, but with an extra layer of financial uncertainty on top. We can't get back to (some kind of) normal soon enough.

But without contradicting any of that, I've found that a remote connection is still a connection. That my favourite musicians have still moved, inspired and comforted me even though we're not in the same space. I'm not suggesting for a moment that remote performances are 'as good' as live concert attendance - there is nothing as good as that, it's irreplaceable.

This is a different kind of bond with the artist, I think: the act of reaching out, of communion between performer and listener, has become more necessary, important, and I am really feeling it. In a way, it's more personal perhaps, as it's much easier to pretend they are performing just for me! - I wonder if the artists can sense the thousands of grateful onlookers as they sing or play to their laptop camera, or if it's all too surreal? By all means, let me know, someone. I also wonder if, when we are all together again in our concert venues and opera houses, this is the key, indescribable emotion that will stop us taking our access to culture for granted. We'll be back, grateful, relieved... but also changed, I think - and possibly (speaking as an audience member) for the better.

Limitations can bring out the best in us. When I call to mind our newly-online musical life, from the more relaxed, informal 'down-home' performances, right through to the technical inventiveness of the isolation recordings ... I also think about what this phase could bring to the music world after the crisis passes. Huge leaps in outreach to listeners who, for any number of reasons, may never get to live concerts? New models for performance and recording that take advantage of - ironically - a closer-than-ever bond between artist and audience, potentially increasing their income and ultimately improving the haphazard ways they are paid? Wider opportunities for smaller ensembles to cast convention aside, and tackle different repertoire in the studio that might not be feasible for them live?

The Wigmore concerts might prove to be one of the important stepping stones we look back on from our musical future. The buzz of live attendance will be missing, of course - but they are still a serious venture towards evoking the 'shared concert experience' - its ceremony, flair and excitement. I think we will find that the artists still connect with us very deeply: a connection we'll acknowledge with warm applause when we are back together with them again.