Sound travels: Raf and O's 'The Space Between Nothing and Desire'

What a pleasure it is to be writing about a new Raf and O album - roughly three years after their last, the majestic 'Portal'. Back then, I wrote about how that record so completely embodied its title, the duo finding an exact connection between acoustic, organic pop/rock and more abstract, avant-garde electronica.

Now, we have another perfect title: 'The Space Between Nothing and Desire'. This latest album, if anything more perfectly realised and brilliantly entrancing than their previous work, seems more about a sonic journey than a meeting point. It takes the listener on an audio voyage that seems to bridge the gap between cosmos and earth as the record develops. 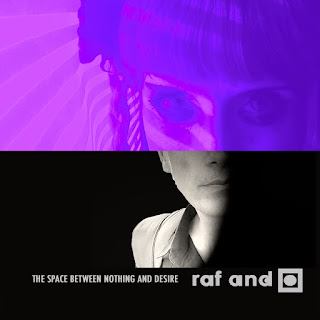 It feels slightly awry to try to guess or detect Raf & O's 'influences' as such, because they only really sound like themselves - but in parts the album gestures towards inspirational figures, themselves all questing, visionary artists who, in some way, brought the leftfield and mainstream together: David Bowie, Scott Walker, Kate Bush...

At Kate Bush, it's worth taking a short detour. One of the activities keeping R&O busy in the last few years is their side project, 'The Kick Inside'. In this guise, they perform KB covers, with Raf on voice and piano, and O mostly on double bass. While the explicit intention, given the pared-down format, is to celebrate KB's early material, the live show in fact stretches out to include brilliant acoustic arrangements of tracks like 'Cloudbusting' and 'Suspended in Gaffa'. Raf's interpretation, too, 'represents' KB rather than simply imitates, her voice already a great match for the songs. So, rather than a tribute as such, it becomes a fully-formed re-imagining, of a Kate who may still have written all those incredible tracks at the same pace, but - perhaps undiscovered - kept gigging them out in the clubs. (I wrote more about this 'alternative reality' here.)

It's impossible to believe that so much time spent inside Bush's imagination hasn't in some way fed into this new album. But what's so remarkable is that, if anything, it isn't KB's own sound audible in the record, but elements of  'The Kick Inside' - in other words, the approach Raf and O brought to it. Two of the tracks are essentially piano and guitar only - more on these below - and throughout the album, Raf's vocals (always captivating) are, if anything, stronger and more versatile than ever, in total command of melody and mood. Whatever music and effects are happening around her, they are always placed with uncanny precision, to never get in the way of the voice. The inventive, seemingly infinite variety of sounds orbiting around the vocal make this a classic 'headphones' album throughout.

The first three songs sustain a similar ambience - a stately, dignified pace, with an emotional resonance that's only enhanced by the sparse treatments and sense of otherworldly restraint. 'A Bow to Bowie' gazes explicitly heavenward, combining respectful, open sincerity with sheer intelligence and wit, absorbing musical and lyrical references to the song's subject into a structure all their own. The title track is almost a battery-operated torch song, Raf's sensual, almost swinging vocal conjuring up a kind of electronic chanson. With its shimmering synths, echoing chimes and vibes, and submarine pulses, 'Underwater Blue' is perhaps the closest the duo have come to a 'hauntology' track - theme music, but when the broadcaster's library is on another planet. It actually feels like the aural equivalent of diving/drifting.

After the cosmic glide of these opening numbers, 'Anger' subtly changes gear, spearheading the next group of three tracks where the intensity increases, and the album rocks a little harder. This song in particular is a great example of how the duo are able to make the music itself convey human feelings just as much as the voice: everything about 'Anger' bleeds tension without release, from its circular hooks and sirens to O's magnificent 'ghost in the machine' drumming: exact yet unpredictable.

'Your Gazing Stare' seems to bring Raf and O's module even closer to the earth's surface. One of my personal favourites on the record, it initially seems to return to the 'drift' of the early phase of the album, but above the glistening guitar, Raf's vocal moves at a pace through a hypnotic, circular lyric until O's drums kick in and the song hits an irresistible groove. The voice temporarily becomes part of the rhythm section, incantatory, before yielding to the beat - soon ramped up by 'A Mechanical Ride', with its lopsided fairground riff, O's fractured beats powerful and precise around Raf's intimate stage whispers, describing the science of falling in love. Again, the duo's attention to detail repays repeated listening - on the phrase 'music box', chimes enter out of nowhere to bring the song to a close. 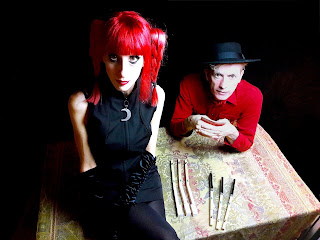 In my mind's journey through this album, this feels like the point where I would turn the imaginary vinyl over to side two, and start the third phase of the trip. Perhaps more about inner space, this part of the record starts with a beautiful Scott Walker cover, 'Such a Small Love'. R&O's meld of 'old and new' instrumentation - here a subsonic synth rumble shares the arrangement with acoustic guitar and minimal brass - feels fitting for an artist who somehow symbolises both classic singer-songwriting and the outer-reaches of experimental rock. The existential cabaret feel continues into 'With Fatzer', based on a play fragment by Brecht (another Walker influence) about lost souls in WW1: here Raf's piano moves further into the foreground, but surrounded and finally overwhelmed by the suggestion of military or industrial machinery. Brief companion track 'The Windmill' seems to belong to the same world, this time with the piano accompanied by accordion/harmonium-style 'drone' synths that seem to call back to 'Such a Small Love'. For me, this section conveys a gorgeous unease, grappling with earthly concerns through alien music.

Then, for the album's close, the veil lifts completely and we reach the two acoustic tracks I referred to earlier: a cover of Bowie's 'The London Boys' and the original 'Haunted'. Particularly on the latter, O's spare, percussive guitar punctuating and then - at the very end - almost agitating against Raf's piano ensures that even without the electronics, this fourth 'group' retains the duo's unique atmospherics.

I know it might be slightly unusual for a write-up to go through an album almost song-by-song, but I think this record deserves that level of attention and description - I love the way it travels, the way the sequencing actually matters. Every second sounds like Raf and O. But as it progresses, the off-world electronics seem steadily to give more ground to sounds rooted in the real, and the space between nothing and desire closes. And as their music always has done, it points towards a fascinating future.

The album release date is 31 May 2019, and I strongly recommend you order it from Raf and O's Bandcamp page here.

(Please note that I have written about the full CD version of the album - the download option omits the covers.)

Photo from band Facebook page - could not see credit! Will add if / when known.