Parent company: my folks vs opera

Since retiring, my mum and dad have probably focused on the normal 'H'-related activities (home, holidays, and inevitably, a bit of hospital) - but there are signs they've acquired a slight taste for adventure. Taking travel as an example, they were essentially UK-bound thanks to a shared fear of flying - one reason I know probably every centimetre of the Isle of Wight - but in later years, seemingly possessed, they've boarded Euro-bound coaches to some further flung regions on the continent: and more power to them.

It's also starting to happen in other areas, too. For a recent Mothers' Day, Mrs Specs and I took them to the Royal Opera House: not for an actual show, but for the treat-laden afternoon tea. However, as the special occasion merited, members of the chorus performed arias with piano accompaniment throughout the session. It was a superb afternoon, but the big surprise towards the end was when Dad announced: 'You know - I'd like to go the opera one day.' Mum: 'Me too. If it's anything like this - that would be lovely.'

I instantly said: 'Well, that's great! Leave it to me.' I was overjoyed. This really was new. Dad was Team Sinatra. Tribe of Elvis. Mum probably last put a record on in 1964. We'd always had bonds culturally - books, films, TV - but music only tangentially. To hear them express an interest in anything to do with classical music awakened that impulse in me that perhaps every child recognises when there's a chance to fix something up in their 'field' for their parents: to give a bit of all that nurturing and education back.

I had a few problems to negotiate. Which opera? It would need to have 'proper' melodies (I love a lot of contemporary stuff, but this visit was not about me.) Thanks to Dad's fear of heights, I needed to find the exact point in the auditorium between affordability and terra firma. Couldn't be too long, either, or Mum could fall asleep and Dad's leg would fossilise - the last thing I'd want would be for him to stand up for the interval only to tip serenely over into the next row. So that's 'Parsifal' out. In the end, I spotted that 'Tosca' (with one of my favourite singers in the title role) was coming round early next year at the ROH. Perfect - a real thriller of a 'starter' opera: tense, tragic, tune-packed.

I can't wait for the date to arrive and see what they make of it. In the meantime, a conversation I had with Dad today indicates the learning curve may be steep-ish... it began with Mum saying 'You were at the opera all weekend!' 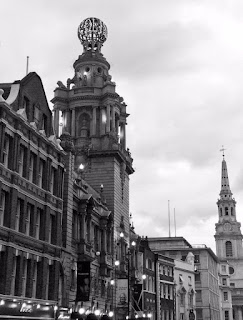 (The Coliseum, home of English National Opera, where I was 'at the opera all weekend'.)

Me: Well, sort of. I just ended up getting tickets two nights running. 'Aida' on Friday, 'The Barber of Seville' on Saturday.
Dad: Ah! 'The Barber of Seville'! Heard of that.
Me: Yep. You know, 'Fiiii-ga-ro', that one. Laugh-out-loud funny. Brilliant.
Dad: He's married, isn't he?
Me: No. [Pause.] Oh. You must be thinking of 'The Marriage of Figaro'.
Dad: Yes, exactly. He's married.
Me: No, I mean - 'The Marriage of Figaro' is a completely different opera. Mozart. 'The Barber of Seville' is by Rossini.
Dad: [A facial expression which says 'I am tolerating this, for now'.]
Me: Figaro is a character from some old French plays, and the operas are based on those. So, while the composers are different, 'The Barber of Seville' is a bit like a prequel to 'The Marriage of Figaro', in story order.
Dad: So he does get married.
Me: YES but not in the opera I saw on Saturday. He gets married in... well, in 'The Marriage of Figaro'. In 'The Barber of Seville', he helps a nobleman rescue the woman he loves from the clutches of her guardian.
Dad: But he's involved with some woman downstairs, isn't he? They're in on it together?
Mum: Don't look at me, dear.
Me [after some moments]: Well. The woman, ok, is upstairs. A prisoner in her own room, so to speak, but yes, she's in on what they're doing - she wants to escape.
Dad: No no no, she's downstairs. The people go down a trap door, and she puts them in the pies. She's in on it, with Figaro - right?
Me: That's Sweeney Todd, Dad.
Dad: THAT'S IT! I knew it.

If an enterprising composer out there would like to write 'The Demon Barber of Seville', my Dad's going to love it.