While I realise we are spoilt for cultural choice in London, I am still greedy enough to wish that Opera North were also just down the road. I encountered the company for the first time when they obligingly visited the capital, to perform their magnificent Ring Cycle at the South Bank - and since then, Mrs Specs and I made the trip to Edinburgh to catch their superb Puccini double bill and 'Billy Budd' on tour.

This time, we met them on their home turf, in Leeds. The latest Opera North season is made up of the brilliantly inventive 'Little Greats'. Instead of presenting three or four evening-length operas, ON have chosen six one-act works, each lasting from around 45 to 80 minutes. Tickets were available separately for every performance of every opera, to give audiences maximum flexibility - however, for practical purposes, most (if not all) 'visits' were programmed as double bills. The company mixed up the scheduling throughout, giving people access to almost any combination they fancied, and allowing some surprising juxtapositions.

Fascinated by the idea, I looked into the logistics of a trip. However - as a non-local, I found my booking decision made itself. I worked out that if Mrs Specs and I went on the final Friday evening and Saturday afternoon/evening performances, we could see all six. Rude not to, in fact. 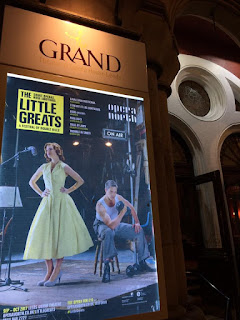 Here are the six operas, then, in the order we saw them:
[Seasoned opera-goers will know that it's in fact a longstanding tradition to perform these last two together - although more commonly the other way round (resulting in their joint nickname 'Cav/Pag'). However, the fact we saw them as a pair was simply circumstance - earlier in the season, there were several opportunities for punters to combine each one with a selection from the other four.] 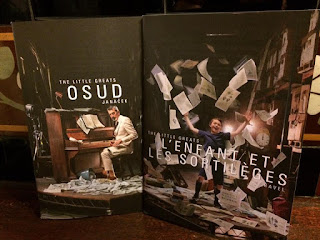 ON's General Director, Richard Mantle, writes that a key aim of the 'Little Greats' season is "to explore the boundless variety of opera" - and here they certainly succeeded. Even the classic coupling of 'Pag' and 'Cav' - which both represent the short, sharp shock of Italian opera at its most visceral - had undergone a kind of interrogation of their differences: 'Pagliacci's theatre group in a chaotic state of rehearsal realism, mayhem holding sway even before the bloodshed becomes a reality... while 'CR's characters inhabit a more surreal, suspended limbo where their conversations and actions criss-cross - yet the storytelling maintains its clarity right through to the chilling conclusion.

'Osud' is an astonishing work that, to my mind, belongs properly in the repertoire. Its flashback structure (emphasising the characters' inexorable journey to the 'destiny' of the title) and self-perpetuating plot - about a composer who uses the disasters in his life to fuel his opera-in-progress and, as a result, can never complete it - give it a thoroughly contemporary 'meta' feel that would make it a natural bedfellow to a piece like 'Written on Skin'.

Yet the biggest surprise to me of the six was the Bernstein. Familiarity with 'West Side Story' alone would suggest the ability to mix some of the most joyous music with gritty, bittersweet and even tragic situations, and the almost carefree elision of jazz and classical styles. But it seems this was all there, 100%, in his first opera-in-miniature. 'Trouble in Tahiti' is a day-in-the-life story, lasting well under an hour, which we spend with Sam and Dinah, a married couple who have lost the ability to communicate. Each day, it seems, they could reach a point where they talk it through, but instead they bicker, avoid each other, then seek refuge in a movie before 're-setting' for the following day. In a genius touch, a Greek chorus role is taken by a doo-wop style trio on the radio, singing their hymns to the perfect suburban life which we watch and hear going so poignantly wrong. Despite the fierce bravura of 'Cav', 'Pag' and 'Osud', this was in fact the Little Great that got to me the most, brought me closest to tears. 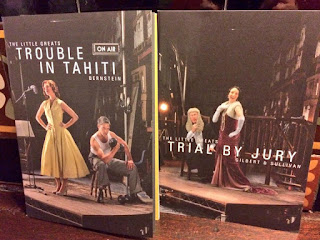 In comparison, the Ravel and G&S works are confections. In the former, a naughty boy is banished to his room, only to have everything he has abused - from the formerly inanimate objects in his room to the animals in the garden outside - come to life and turn on him. 'Trial by Jury', on the other hand, is almost beyond farce: a blurry rush of lunacy that delights in its own daftness - an early work that seems to have G&S testing each other's limits without worrying about niceties like plot or logic. However, part of the collective genius of this project is that these lighter pieces were delivered with as much care and conviction as the others, giving both the light and dark side of opera equal worth and weight.


I knew before seeing these operas that I would almost certainly post about them, and I reasoned that I would write about all six in turn, perhaps a couple of paragraphs on each. But in fact, that has proven impossible. This is because, while each one works perfectly well by itself, the cumulative effect of seeing all the Little Greats in fairly quick succession is to realise how unified the season is overall: there are references and continuities that don't make or break one's enjoyment of each individual opera at all - but they can enhance the experience if you want them to.

For example, the shared nature of the operas as 'blink and you'll miss them', momentary suspensions of disbelief is embodied in the visual presentation. While several directors were involved, Charles Edwards designed all the sets - and in each opera they present a temporary enclosed world that the characters to some extent manipulate and dismantle onstage - from the fading front room of 'Tahiti', the looming cross on the church wall in 'Cav', the disintegrating classroom in 'Osud', the bedroom imperceptibly giving way to the outdoors in 'L'enfant'... to the rehearsal area itself in 'Pagliacci' which, neatly, features designs for the other five Little Greats pinned up onto the sets. Equally, we see or hear constant reminders of time in all the productions, whether the characters are society gossips staring at a clock face willing 10am to arrive ('Trial'), a radio chorus trying to time their entrances and exits accurately ('Tahiti'), villagers heeding a tolling church bell ('Cav') or in fact the personification of a broken clock ('L'enfant')! 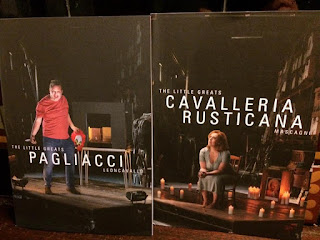 For all this pleasing unity, perhaps the most thrilling element of the Little Greats for audiences will prove to be the wonderful performances. It was a privilege to hear the Opera North orchestra in such clarity (when used to the sheer size of London houses and, accordingly, sitting much further away from the action - everything here was several times clearer and louder) - in particular the string section, setting their stall at the outset as engines of terror in the Janáček. The chorus, too, not only made a great sound - providing the entire cast, solo parts and all, for 'Trial by Jury' - but proved masters of physical comedy and movement: I'm thinking in particular of the crowd scenes in 'Osud' and, even more so, the rowdy players just about keeping the action in 'Pagliacci' on the sane side of anarchy until the shocking, closing tableau. My admiration for players and singers alike increased with every performance: the sheer versatility on display, in such compact circumstances.

The season also encouraged brilliance from the soloists, who would from time to time reappear as a result of fascinating casting. Giselle Allen gave two studies of the wronged woman - the down-trodden Mila in 'Osud' and the repressed Santuzza finally reaching breaking point in 'Cav' - both given gorgeously yearning voice, yet so distinctly characterised as to feel at first like two different sopranos. Rosalind Plowright also appeared in the same two operas, as a mother-figure in each: in the former a dangerous loose cannon, vocally fearsome, while in the latter, a more uptight, withdrawn individual with a more resigned, brittle tone. It was also a joy to see singers taking relatively small roles in some productions come to the fore in others: for example, two of the supporting players in 'Osud' went on to dominate 'Pag' - Peter Auty as a heartbreakingly unhinged Canio opposite Richard Burkhard's terrifyingly malevolent Tonio, attacking every syllable with all-too-believable venom.

It's so hard to single people out when this whole enterprise was so clearly the result of a committed ensemble. But I would have to mention Wallis Giunta, who switched overnight from the bolshy defiance of tearaway boy in the Ravel - played tenderly and convincingly as a proper junior 'trouser role' - to the longing and disquiet of Bernstein's Dinah. I'd also pay tribute to the acting (as well as singing) of John Graham-Hall, utterly inhabiting the lead role of Zhivny in 'Osud' - fragile nerves, paranoia, panic, obsession - only to spend the rest of the evening, thanks to Ravel, as either a tea-pot or a tree-frog. That really is range.

As I write, the Little Greats have closed in Leeds but now head out on tour to Hull, Nottingham, Newcastle and Salford - so, if any tickets remain, please get to some or all of them if you can. Just like that astonishing interpretation of the Ring, these productions have the stamp of a company with sky-high ambitions, backed up with the imagination and talent to achieve them.