How important is music to our lives, to our memories? And how do our lives, past and present, shape the way we listen to music?

Ever the trendy young thing, I went to my first-ever rock concert in my early teens: Genesis. Of course, this was not their early days featuring Peter Gabriel wandering around the stage dressed as some kind of alien allotment. I won tickets (I forget how) to Wembley Stadium to see the chart-slaying Phil Collins version of the group touring the 'Invisible Touch' album.

Perhaps this applies to many of you, but when a gig like this is your first taste of live music, it gives you a lot of strange ideas. I was bitten by the bug, and soon started seeing more bands with my pals, but I had to find out, agonisingly slowly, almost one show at a time:

Because I was a nipper, my gig companion on this debut venture was my hapless Dad. I wasn't fazed by this in the least - I wasn't in the least bit troubled that this might be 'uncool', and I think I realised even at the time that being 'uncool' wasn't really a problem at a Genesis concert. Different story for my Dad, though. I hadn't come into my natural birthright of a complete run of Beatles and Stones original vinyl, because both my parents appeared to have slept through the entire 60s - instead, all the great records I 'borrowed' from my father were the previous, crooner generation: Frank Sinatra, Johnnie Ray and, my favourite, Nat King Cole.

So, to my shame, I was grateful for Dad's company but thought 'Land of Confusion' might be an uncomfortably literal way of describing his experience. How wrong I was. He loved every minute. He would turn to me and say brilliantly Dad things, like "If you decide you're going to listen to this sort of thing, the louder the better." One of his cricket mates "also liked Genesis, so he knew it'd be all right". ('Dad Rock' is a term often used with a sneer, but of course it implies that the music it describes can cross generations.) And finally, the most Dad moment of all, suggesting we nip out through the encore to beat the crowds back to the station.

As far as I know, he hasn't voluntarily listened to a note of Genesis since. But I read this back, and think - yes, it was a superb concert, the band were all-conquering, but what I really remember about it, is that I was there with, and because of, my Dad. You don't always bond over familiar things - it can happen when you share something new, unusual, strange and powerful. When I play Frank and Nat, I think of my Dad's generation, what he enjoys, what he stands for. When I play late Genesis, I think about being with my Dad, and how great that is.

A few years back, I was in a band for a bit. Some of the people who were in the band might be reading this - and I know they won't mind my saying that, for a fair bit of the time, the whole thing was a pain in the rear end. Yes, we had our share of 'personnel issues' - not so much a 'revolving door' line-up as an empty lift-shaft - but many ragged amateur combos go through that. We had a slightly odd line-up - no bass but TWO keyboards, like a kind of 'Double Doors', at our most 'stable' - and our fortnightly rehearsal was just out of the way enough to be a hassle for ALL of us to get to. Sigh. It's amazing we lasted as long as we did.

Or is it? We all chipped in songs we had written, and there was perhaps one I wrote that I would still stand by now. The band liked it, and I was touched at the time with how they threw themselves into the arrangement. In particular, my fellow keyboard player - a really gifted musician, I should point out - had worked out a piano part so accomplished that I didn't need to play at all - just focus on the singing. And while nothing ever came of it, I got to experience that adrenalin rush of singing my song, with my friends behind me, creating a noise between them that buoyed me up, made my vocal feel like it was an aeroplane leaving the runway. We might have been in a shed on an industrial estate, but we were being MAGNIFICENT in a shed on an industrial estate. Music started it, and in a way, the music we all tried to agree on, sort out and play... well, that ended it, too. But the memory of that performance, and how we all tried to give each other the same support, chips away at my recollections of the hassles and horrors, note by note.

My entry into serious opera-going began with 'Nixon in China' at the 2012 Proms. But I had a couple of brushes with the form years before, on the cusp of my twenties. One was seeing a production of 'Eugene Onegin' which seemed saddled with a poor English translation ("There goes a shepherd!"). But I also ventured into the Royal Opera House gods for a production of 'Turandot', with a girl I had met at university.

We were never destined to 'go out' in the normal run of things - she was a visiting student from overseas - but that doesn't mean I didn't regard her as absolutely wonderful. The ROH provided its old-world, pre-refurbishment glamour, but it couldn't match my companion's splendour on that evening, our joint eagerness for the shared, new experience, her curiosity, her conversation. Opera can provide overwhelming drama, but that night - thankfully - it could only give joy. To this day, I cannot subtract joy from my experience of opera, my constant impulse to take only positivity from music. 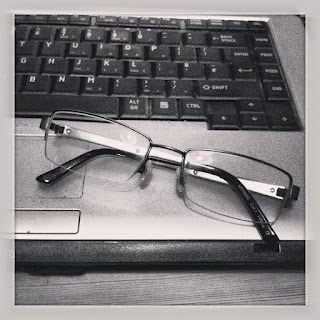 On the subject of Promming, some of you may also know that I watched the entire Ring Cycle, conducted by Daniel Barenboim in 2013, from the Royal Albert Hall gallery with a chap called David, a work colleague of Mrs Specs with a secret double life as a Wagner nut. It's a matter of record how powerful these performances were, and the impact they had on the audiences that made it to the Hall for the whole week. But of course, the 16 hours or so of actual opera was a mere fraction of the overall time David and I spent together - queuing, eating, queuing, drinking, queuing... and then finally getting into the sweltering heat of the hall itself.

By the end of the week, it felt like we had been on the musical equivalent of a kind of survival course together - and in David's case, during Act III of 'Die Walküre' after one Pimms too many, it was literally like that. (It is a little strange to be concentrating on Wotan and Brunnhilde one minute, only to be dimly aware that the person standing next to you is slowly slipping to the floor. 'Overcome by emotion!' I assumed at the time.) But the point is - before 'Das Rheingold', we were mates. After 'Götterdämmerung', we were blood brothers. I doubt there was a topic in our twin musical universes we hadn't covered, and much more besides. He probably knows some of my darkest secrets and I've simply forgotten I told him in a fog of heat fatigue and leitmotifs.

If David and I had met in any other circumstances, we may well still be friends. There are some areas of our lives where we're irreconcilably different, of course. But the Ring experience cemented the nature of the bond we share - a ceaselessly good-natured mesh of intuitive understanding and musical codewords, a happy meeting point between telepathy and bewilderment.

Greater love hath no woman than to attend a Billy Bragg concert with a migraine. But this is what Mrs Specs did for me - in the early days, she's happy to admit, when she was possibly still trying to impress me a little. She didn't tell me, of course, until afterwards (I'm not a monster) but I can only imagine, with some guilt, how a stridently-bellowed 'Between the Wars' must have affected someone who could barely focus between paracetamols.

A better experience for us both followed with the Buena Vista Social Club gig at the Royal Albert Hall (again). Both mad about each other as well as this music, we came to the gig on equal terms - a sound we both adored, neither of us bestowing it upon the other. Still learning how to be a couple, this was one of the concerts that taught us to dance with each other, shed self-consciousness, give in to happiness.

The audience ended up in a very genteel form of disarray, as people half-forgot to orbit their seats, and began to cut some rug in the nearest available proper space. During a closing slow song, Mrs Specs dropped into a seat on the end of a row, and I contentedly just sank onto the staircase where I was, leaning against her legs, head level with her lap, her hand resting on my shoulder.

You will all have read that, earlier this week, a suicide bomber struck at Manchester Arena, as fans were leaving an Ariana Grande concert. I can only add my sympathy and support to anyone affected, as I can't begin to imagine what any of them are going through. I was moved to see various comments across the media - 'normal' and social - highlighting that this was a musical event (and specifically one that would attract the young) and expressing bitter regret that something designed to give pleasure and encourage unity should be shattered in this way.

I nurture the hope that in the recovery process, music will play an inevitable, invaluable part. Ariana Grande was of course horrified by the attack and has cancelled dates out of respect - however, I truly believe that the bond her music creates between her fans will be crucial to what helps them get past any lasting fear or terror. What the terrorist sought to ruin, will in fact be instrumental in aiding the healing - the polar opposite of his aims.

I also recalled the remarkable book 'Being Dead', by Jim Crace, which takes as its starting point the violent death of its central couple, but then deliberately sets out not to 'resurrect' them, but to restore the vividness of their lives through stories and recollections.

And then I simply kept recalling. Music, sounds and events dotted through my life, that somehow add up to something indestructible... its power to create, shape and energise. To bring to life friendship, love, harmony, belonging, and hope.