Regular visitors to this blog - thank you, darlings, thank you - will already be familiar with my epic admiration for the ensemble at English National Opera, and in particular its chorus. I'm not alone in this - they rightly attract awards on the world stage.

But to bring this down to a personal scale - in the time I've been going to the Coliseum, they have never let me down: not once. Whatever the opera, whatever the production, I find it increasingly impossible to imagine any group of performers being better at doing what they do. It's not just the fantastic sound they make - their skilled acting means they always appear to behave like a group of real individuals rather than a nebulous mass, yet their evident internal bond and commitment to the material makes them one of the most rock-solid, tight-knit units any conductor and soloists could wish to have in support. And without wishing to 'sentimentalise' - they don't need it - their onstage brilliance has remained undimmed throughout the traumatic business issues engulfing ENO in recent years, which must have hit them all so hard.

Now, it's time for them to have their moment, you might say, in the sun.

'ENO Studio Live' is the umbrella name for a new venture which allows ENO's 'homegrown' performers and directors to present smaller-scale productions away from the Coliseum, in Lilian Baylis House. (This West Hampstead venue is fascinating in itself: by day, it's ENO's rehearsal space, and in a former life, it was the Decca recording studio.) First up is Jonathan Dove's intriguing one-act opera, 'The Day After'. 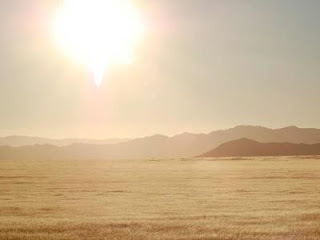 I should say that I only use the phrase 'smaller-scale' to describe the dimensions of the auditorium and stage areas. The ambition on display here is planet-sized.

As soon as we enter the building, everything feels different. This has the welcome atmosphere of intimate, upfront fringe theatre: the cast and musicians are already in place, most of them tucked up in blankets, semi-visible, on the stage. None of us are more than about 11 or 12 rows away. All the rigging and stage lighting is prominent, fixed in place - almost like you'd expect if you wandered onto a film set where all the gubbins the camera conceals is suddenly right before your eyes. Instead of an elaborate backdrop, the lion's share of the chamber band is semi-concealed behind the performance space. There are no surtitles, so you have to concentrate hard at first - a move that pays real dividends. A sudden plunge into darkness, and the opera begins.

'The Day After' has its roots in Greek myth: Phoebus, god of the sun, allows his son Phaeton to drive the chariot that pulls the fiery star across the sky. Phaeton, however, isn't up to the task and loses control of the horses. The sun dips too close to the earth, causing widespread drought and devastation. The opera imagines these events from the survivors' viewpoint. The five still figures on stage come to life and discuss their plight - and are soon joined from both sides by the rest of the chorus. In an attempt to come to terms with what has happened, the wider group encourage the leads to re-enact the disaster and 'take on' the personas of the key players.

The action takes place in a kind of surreal limbo where everything apart from the underlying legend itself is modernised: from references to fashion and celebrity culture, to the gang of heroically foul-mouthed bullies who set upon Phaeton when he boasts about his dad. Ingeniously, the chariot itself is a mash-up of natural and mechanical tech: we still encounter the horses, but the machine also seems powered by fuel cans, glowing from inside with the sun's energy. The sun itself is represented by floodlights emerging from the venue's rigging.

To my mind, the effect of this is to make the action immediate, and as a result, more affecting. Everyone in every civilisation was 'modern' once. Who are we to laugh at the idea of a sun chariot falling to earth when we have managed to overheat our planet all by ourselves? ('The Day After' was originally performed outdoors, at Fort Rhijnauwen in the Netherlands, with highly elaborate visual effects but smaller vocal forces. The composer prepared a special 'full chorus' version for ENO's production.)

And crucially, the emotional depth and versatility of the performances bring the poignancy and horror home. All the soloists were remarkably adept at switching between characters. Rachael Lloyd was chameleonic as the survivor least interested in re-telling the story (she nearly spits out her rage at the futility of the exercise), transformed into Phaeton's mother. William Morgan also neatly inverted his diffident young man into the dangerously cocky Phaeton - taking the character through a horrendous rise and fall and injecting his tenor with real terror.

It's truly exciting to note that the three leads I've yet to mention are all drawn from the ENO chorus, and all gave fiercely individual, unforgettable performances. Susanna Tudor-Thomas invested her survivor with a weariness that still admitted a glimmer of hope. Claire Mitcher played, with heartbreaking poignancy, a younger woman identified with Phaeton's abandoned love. Her song asking to be remembered was, for me, one of the show's quietly powerful highlights - a rendition of understated but undeniable beauty, so sensitively sung and acted, it was as if the opera was momentarily suspended until we were all ready to carry on. Robert Winslade Anderson unleashed several chariots' worth of charisma as Phoebus, his commanding bass convincingly god-like, but not above (or below) a jittery note of panic as he realises his terrible mistake.

The score felt dizzyingly, restlessly imaginative. As far as I know, there's no recording, so I'm relying on memory from the one listen - but exciting, propulsive motifs illuminated the story: Phaeton's journey east to find Phoebus has him travel through the 'music' of several countries, and one extraordinary moment had four of the soloists simulate an echo, 'travelling' up the voices, register by register. James Henshaw conducted, and as he's ENO's chorus master, perhaps it's no surprise that he created such a successful sonic blend where the voices had the edge, but were punctuated and challenged by the orchestra at every turn. (Particular shout out for timpanist William Lockhart, who - hidden from our view - seemed possessed by the spirit of John Bonham and ignited the evening with roof-threatening rhythms.)

A huge amount of credit should also go to director Jamie Manton (who also took the striking publicity photograph), designer Camilla Clarke, lighting designer Tom Mannings and movement director Jasmine Ricketts... between them, they have created a highly specific universe where the build in visual intensity matches that in the music. It's a testament to the gritty, burnt, decaying feel of the props, and costumes that the real-world nuts and bolts of the venue interior are soon forgotten.

Being so close to the action only brought into focus the sheer authority and class of the chorus, who not only created a glorious wall of sound, but also moved so hypnotically. The intimacy of the venue made the electricity of the performance almost palpable - whether having some of their colleagues out front as soloists somehow made the link even stronger, I can only speculate, but the connection and interaction between leads and chorus looked and felt invincible from where I was sitting. Even though the opera takes us (literally and figuratively) into very dark areas, the overall experience - vibrant, urgent, exhilarating - shone brightly indeed.

IMPORTANT: At the time of writing, there are still two evenings left in 'The Day After's brief run. If you can go, you really should. Click here for the page you need on ENO's website.

The second in this year's brace of ENO Studio Live productions is the Gilbert & Sullivan short comic opera 'Trial by Jury'. It's also coming up fast: you can find details here.

A few final thoughts: ENO's original mission was - and is - to make opera widely available and accessible - hence the commitment to performance in English translation, for example. For anyone even vaguely tempted to dismiss opera as 'elitist', 'posh', 'exclusive', 'difficult', or 'old-fashioned'... any of these endlessly daft ideas that somehow seem to keep resurfacing - look more closely at ENO Studio Live.

The venue had a buzz closer to the feeling I associate with rock gigs - and the volume felt a bit more like that, too (although of course no-one required amplification). There was something almost renegade about it - the rough-at-the-edges surroundings, the wit and inventiveness, the obvious joy taken by the ensemble in bringing something to life entirely from within themselves.

If any ENO management were to read this...? I would counsel you: ramp up the ENO Studio Live activity and advertise the living daylights out of it. Target the young, students, the fringe theatre crowd. Someone who sits in the ROH stalls for 'Turandot' may not get this, but someone who stands in the yard at the Globe will. Get some of it broadcast or recorded - I would like to have seen BBC Radio 3 here, or even (depending on the opera) BBC Radio 6 Music. Time to get all this in-house brilliance out of the house.