'L'Étoile' ('The Star') is a comic opera by Chabrier, currently enjoying its first ever run at the Royal Opera House. It's attracted mixed reviews so far - I've come across reactions ranging from delight to derision, sometimes both in the same piece. A recurring theme seems to be that the evening is somehow insubstantial - but there is no real consensus over why. Is the opera itself simply too featherlight to merit serious consideration... or is it an unsung (so to speak) masterpiece let down by the production?

Whatever the elusive truth, my party - and seemingly most of the audience along with us - had an excellent time. Could we have left our own critical faculties at home, perhaps?

On balance, I don't believe so. I actually think the ROH have done something rather brave and clever with this one. If - in terms of seats sold by the end of the run - it turns out to have been a commercial let-down (the place felt packed on our Saturday-night visit), then I would count it a 'noble failure' and possibly look at better ways to get the word out. Artistically, I found much to enjoy.

For once, I'm not even going to try writing a synopsis. The plot is pure farce, to the point of insanity. Not to mention the fact that you still have four chances to see it (tickets available here), and since the opera isn't that well-known, you might prefer not to have every last twist and turn itemised in advance by someone like me. Suffice to say that King Ouf I is looking for someone to impale as part of his birthday celebrations (I did tell you) but the only person to accidentally behave offensively enough for this dubious honour is Lazuli the pedlar, our hero. Lazuli is in love with Laoula, a foreign princess who has been escorted to the city by her ambassador to make a beneficial match with the king. ('Married ouf', you might say. Sorry.) Inevitably, matters aren't helped by the ambassador's party travelling incognito, so that no-one is in fact who they seem...

So, with the absurdly complicated plot, physical tomfoolery, mistaken identity... the piece obeys the conventions of farce over opera. At one level, you'd look in vain for the subtlety, emotion and heart you might find in a more celebrated comic opera like 'L'elisir d'amore' or 'Le nozze di Figaro'; 'L'Étoile' unapologetically, is bedlam. Farces may be superficial, but they depend on the actors playing it straight with utter conviction to 'sell' the mayhem. Our performers managed the operatic equivalent of this, which was not only to inhabit their roles with real character, but also to sing the parts seriously, and beautifully. (It's maybe worth stressing at this point that the opera contains a great deal of gorgeous music - often at odds with the riotous and potentially bloodthirsty action. I'll long remember the peal of wedding bells chiming in perfect harmony with some particularly lush orchestration.)

The two lovers, played by Kate Lindsey (Lazuli) and Hélène Guilmette (Laoula), even succeeded in giving their predicament as much poignancy as the situation could stand. KL, in the 'trouser' role, of course highlighted this 'principal boy' point of cross-over between opera and panto. I felt she caught the right balance of body language that allowed her to be suitably gung-ho and slapping-of-thigh during the broader scenes, while commanding a guffawing audience into rapt silence during her key aria 'O petite étoile'.

Elsewhere, there was some handsome silent acting, observing another rule of farce - that it's always worth watching what's happening in the background. Key to this were the antics of the ambassador's wife Aloès and secretary Tapioca, who could perhaps be more careful about concealing their affair. (I won't spoil this further!) 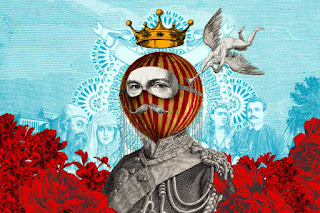 Where the production has perhaps attracted the most controversy is the addition of two roles, Smith and Dupont. Both are caricatures - Smith the uptight Englishman, played by Chris Addison, and Dupont the more laidback Frenchman, played by Jean-Luc Vincent - who act as commentators on the story. They are, as characters, utterly undisciplined, wandering freely in and out of the opera itself, and breaking out of the illusion altogether to have a go at the conductor, argue with each other, and crack anachronistic jokes for *cough* a Modern Audience.

I thought the duo were great. I don't buy the argument that they somehow 'weakened' or 'cheapened' the opera - this isn't 'Parsifal' we're talking about. (Or even 'Farce-ifal'. Sorry.) 'L'Étoile' can quite easily stand - benefit from, even - some input from two extremely seasoned comic performers hell-bent on really selling it. Also, the vibrant colourful staging deliberately evoked the Gilliam/Python style of grotesque animations (using old photos and diagrams manipulated in all kinds of eccentric ways), providing yet another out-of-kilter reference point.

Both visually and dramatically, then, the production aims to trigger links in the audience's minds with various generations of TV/stage/film comedy - successfully, judging the chortles of approval I heard around me. (And I think anyone inclined to feel a bit sniffy about this should bear in mind the 'Mikado' tradition - enthuiastically embraced and warmly received at ENO - of Ko Ko updating his 'little list' with every production to include topical folk who deserve execution. What's the difference?)

There's no doubt that 'L'Étoile' is a strange beast. Audiences seeking the transformative, mystical, cathartic power of the finest masterpieces of the genre, will not find it with this one. It's the kind of entertainment you would recommend to someone who cherishes their 'Ripping Yarns' DVD, perhaps, or who really enjoyed 'The Play that Goes Wrong' - before you necessarily tried to bring along an opera aficionado (although Mark Elder's pin-sharp steering of the orchestra and the vocal talent on display will give them plenty of delightful moments, too).

I came away with the impression that the ROH had put together a joyous evening, ideal for opera newcomers or beginners ... but by using its resources to stage a brand new production of a relative obscurity - instead of relying on a traditional 'Tosca'/'Figaro' warhorse - it's given the experts and addicts a reason to come along and check it out, too.

It feels like the Royal Opera House is coming out to play. Letting its hair down. Sending itself up. It is risky, and as with all comedy, it won't work for everyone. But the grins on our faces throughout - and the buoyant audience response - suggest it's been a risk worth taking.