Recital round-up: back at the Wigmore Hall

I last wrote up some visits to the best venue in the universe, Wigmore Hall, back in August. Hardly any time seems to have passed and the hallowed space is open again after the summer break. For reasons I'll go on to explain, if anything my trips there are likely to increase further... and I even astonished myself when I sat down to gather my thoughts for this post and realised I'd been to six concerts this season already.

With that in mind, I will have to settle for giving you just brief impressions of each gig - since they were all beautiful, and worthy of mention. If the survey approach does nothing else, I will be happy if it conveys just how lucky we are in London to have a place like this - that allows us to enjoy such virtuosic performances in a relatively intimate, and acoustically immaculate, setting.

(A note on the clips: I wanted to share some of the songs that I particularly enjoyed from the concerts, but often those particular pieces have not made it to CD or YouTube recorded by the same team. So, to avoid any unnecessary compare/contrast antics with contemporary performers, I've pasted in historic renditions by the great Lucia Popp, Dietrich Fischer-Dieskau and Nicolai Gedda.)

I also wrote recently about the mezzo-soprano Alice Coote, following her superb performance of Handel arias at the Proms, with the English Concert. Now I was at the WH only just over a week later to hear her sing a full programme of lieder by R Strauss, Wagner and Wolf, accompanied by Julius Drake. Although I have heard AC in recital before, hearing this particular concert so close to the Handel evening was fascinating - to me it underlined how consistent her approach is, whatever the material.

AC seems to me one of the most generous of performers. It isn't just a case of 'giving everything you've got' - it's more that she inhabits each song so completely, it's as if she has fashioned it into its own miniature opera. While Wagner's 'Wesenonck Lieder' were understandably placed as the climax of the concert (how better to finish than a heart-rending 'Traume'?), the song that still haunts me is Strauss's 'Geduld' ('Patience') - a tale of love denied, so searingly rendered here that I caught my breath at several points. JD, always brilliantly chameleonic when required, tracked every change in mood and intent like a telepath. An extrordinary night.


At my only lunchtime concert of the season so far, I saw a soprano whose appeal perhaps rests in taking a polar opposite approach. I first heard Anna Caterina Antonacci sing live in a concert given by the Royal Opera House orchestra, performing Chausson. Utterly enigmatic, she came to life when singing, then during the instrumental passages, just rested within the music, swaying gently, eyes half-closed. It was as if we, the audience, weren't there - and I mean that as a compliment. At the Wigmore, she was performing two pieces by Poulenc (with Donald Sulzen on piano), both based on works by Cocteau: the first, 'La dame de Monte Carlo', is essentially a long song portraying the resolution of a woman ruined by gambling to throw herself into the sea. But the main event, 'La voix humaine', lasts a full 40-odd minutes - a 'chamber opera' for one woman, depicting her character's side of a final telephone conversation with her lover. It's a fully-realised monologue in song, played with chair, desk and phone. While the shorter number was beautifully sung, it was amazing - almost a transformation - to see ACA snap fully into character for the drama. Electrifying, and electrified, as if suddenly plugged into the mains. Constantly on the move, negotiating with ease the variety of tone in the piece, from half-spoken admonishments (whether to the lover or the hapless 'wrong number' who won't go away - all unheard, of course) ... through to passages of fury, fear or fragility, ACA delivered a real tour de force. As it went out as a Radio 3 broadcast, I'm rather hoping it will surface as a CD at some point.... 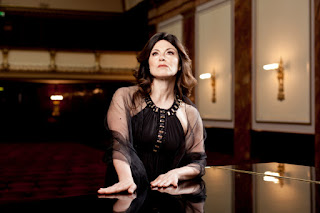 (This photo of Anna Caterina Antonacci was taken at the Wigmore Hall. It's from her management website - Askonas Holt - and is copyright Benjamin Ealovega.)

One of the reasons I'm back at the WH so much is their programming of a hugely ambitious project: the Complete Schubert songs. Allowing for the odd repeat, and inclusion of some Franz in certain mixed programmes, the enterprise is going to take some 40 concerts, over the next two years. I'm planning to attend as many as I can (dropping a ticket price band in many cases, so I can go to more gigs with a clear conscience!) but of course my chances of seeing them all without some kind of clash are pretty slim.

The series has got off to a resolutely baritonal start. Florian Boesch gave the launch concert, accompanied by Graham Johnson, then played the Hall again two nights later, this time with Malcolm Martineau on piano. Again, the marvellous, rare opportunity to hear the same singer perform with two different pianists in such quick succession was rewarding and instructive. GJ is surely the elder statesman of lieder accompaniment, author of the definitive 3-volume tome on Schubert's canon, and the driving force behind so many of Hyperion Records's art song collections. And to me, his playing even felt scholarly, pristine, the music an inseparable part of the man. FB, then, dominated the evening, with perhaps the best results in those songs that dialled down the volume slightly, such as the sublime 'In der Mitternacht'.


It was another story in the next concert. MM is one of my favourite pianists anyway (out of them all - soloists or song/chamber specialists). He has such an expressive, free-flowing signature sound - especially perfect, in my opinion, for French song - but always there 'in the mix', whoever he is accompanying, in whatever genre. I also like the way that he allows his moods (primarily enjoymnent!) to show - bringing the accompanist 'into character' as well as the singer. Partnering a robust, invincible voice like FB (and they are collaborators of old, with at least four discs together: the 3 great Schubert song cycles, plus an album of Schumann lieder), MM - without sacrificing any of his fluidity - somehow ramps up his own presence, so that the pair deliver forceful, yet always sensitive, renditions. 'Im Walde' was a textbook example of this, its incessant bubbling piano rhythm ideal for MM, who was still ready with the necessary oomph (technical term) to deliver some suitably intimidating bass figures. The brew was no less potent in the encore, one of the most beautiful renditions of 'Nachtviolen' I have heard.


All change, then, for a third Schubert recital by Henk Neven (also a baritone) and pianist James Baillieu. I had never heard HN before, but he's a singer of real charm - and stamina. Most of these concerts will necessarily include some of Schubert's less frequently performed works - I wonder how often singers choose to programme 'Der Taucher' (which means 'The Diver'), an epic, tragic adventure story that must last some 20 minutes. It made me think a bit of a classical precedent for those Dylan songs that involve characters called 'Blind This' and 'Jack of That' and go on for hundreds of verses - except this can boast more than its fair share of melodic thrills and spills, especially near the end when JB gets to go off the deep end in a furious instrumental break. Other highlights for me were the gathering pace and urgency of 'Ganymed' (the duo are clearly drawn to the dramatic), and the good-humoured yet ultimately wistful 'Fischerweise' (which - I warn you now - should probably carry a weapons-grade earworm warning...)

(I love the casual, intimate nature of this clip with DFD singing with Sviatoslav Richter. You'll enjoy watching SR, who as the song progresses - and especially from around two minutes in, increasingly gets his groove on..!)


Finally, a pairing I'd been hoping to hear live ever since getting hold of their recording of Schumann's 'Dichterliebe': tenor Mark Padmore, accompanied on fortepiano by Kristian Bezuidenhout. I'm addicted to the sound of the fortepiano, and have really enjoyed KB's performances in several settings - as part of Rachel Podger's chamber Prom band, for example, as well as solo. MP's unearthly, unique voice has an almost choral quality (he's famed for playing Bach's Evangelist roles), a near-angelic timbre with seemingly infinite flexibility as he glides above the chiming accompaniment. The ringing tone of the fortepiano only enhances the holy/spiritual effect.

The recital was, at face value, a date based on their new CD of songs by Haydn, Mozart and Beethoven, but Schubert even made his way into this programme - including another epic, the much-loved 'Viola' (hopefully he'll feature when they next record). But I think the laurel goes to the Beethoven masterpiece 'Adelaide' - its secular, lovelorn theme somehow elevated by the devotional, hymnal repetition of the title make it a perfect fit for the MP/KB combination. One of my gigs of the year - I hope this duo goes on to build up a handsome body of work (and air it all live at the Wigmore as they go along, naturally!).