Word of warning: As you might expect, this post mainly talks about the novel 'Pincher Martin' - although I have stubbornly tried to do so without including any real spoilers. To make a few points about William Golding's writing in general, though, I have been more open about what happens in his most famous book 'Lord of the Flies'. It's one of modern fiction's monster bestsellers and has (to my knowledge) chalked up two films and a stage adaptation, so I'm hoping you've crossed swords with the story at some point. If you've yet to discover 'Lord of the Flies', please go and read that instead of this, with my blessing.

Faber - publisher of William Golding's novels - has started to re-issue some of its titles in a sleek and lovely 'Modern Classics' imprint. It looks like being a format to watch, especially as the poetry and play lists get a look-in alongside the novels. Some of the choices seem almost self-selecting: for Peter Carey, it *has* to be 'Oscar and Lucinda', or 'The Remains of the Day' for Kazuo Ishiguro. So I automatically assumed that if there was a Golding in the initial batch, it would be 'Lord of the Flies'.

Not so. Instead, they've gone for my favourite book of all time: WG's third novel 'Pincher Martin' (1956). 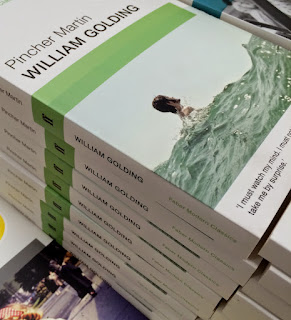 I'm not sure I would be willing to get on a psychiatrist's couch and examine why it's my favourite. It's certainly not a comforting, heartwarming or 'feel-good' book, and I've no plans to take it home to meet my mother. I think 'PM' - and Golding's work overall - appeals to me in the same way a good horror film does. I don't mean the torturer/slasher type of movie - but rather that strand of chiller which revolves around a conundrum or curse, and the more intelligence is needed to understand or explain it, the better (think the Japanese ghost story 'Ring', or 'The Blair Witch Project'). The bravura storytelling exhilarates in spite of any downbeat or spooky conclusion.

For me, 'Pincher Martin' pushes all of these storytelling buttons. All you need to know (if anything) before reading it is: Christopher Martin is the central character (all Martins in the navy are nicknamed 'Pincher'). His ship goes down and he's washed up on a barren rock. The novel chronicles his efforts to survive. If you're wondering how on earth that can sustain a whole book - don't worry. The novel cleverly walks the tightrope between thriller and pen portrait by flashing back to earlier events in Martin's life that shed light on his overwhelming drive to live through the ordeal. I genuinely think that to tell you more could ruin your getting the best out of the book, so I will try and reflect its qualities through some of Golding's other books.

So let's start with 'Lord of the Flies'. Golding had a false start or two as a writer, and although he was a published poet in the mid-thirties, he effectively fell silent after that until the early fifties. A teacher, he became irritated by the upright behaviour of the young heroes of adventure yarns like 'The Coral Island' - he had observed first-hand the cruelty and chaos schoolboys could generate when left unchecked. 'Lord of the Flies' was his riposte. Its boys are stranded on an island following a plane-crash with no adults present and - despite initial attempts at some kind of civil order - they descend into enmity and, all too quickly, savagery.

Although I don't suppose anyone, even Golding, knew this at the time, 'Lord of the Flies' already displayed some key hallmarks that I think apply to every great Golding novel:

No sign of 'Golding the author'
'Lord of the Flies' has its allusive and surreal passages, and its lyrical/spiritual layers are hugely important. But much of the book is told in the simple language of the adventure stories it satirises. It is quite strange to revisit the book as an adult, especially if it made a huge impression on you as a teenager (male, in particular) - reading the novel felt like staring into a filthy mirror.

Golding would go on to write almost every book in a different, but appropriate style. 'The Inheritors', about the last days of a tribe of Neanderthals, uses a primitive, obscure style reflecting the group's own stumbling attempts to communicate (they share 'pictures'). 'Rites of Passage' is written in the person of Talbot, a 19th century buffoon keeping his travel diary in - as was the fashion - the flamboyant style of the century before that: it's some distance away from what we would regard as 'normal' language, and brilliantly sustained. Most popular authors, I feel, have a 'style' - it's why they're popular, readers like the familiarity, whether it's Jane Austen or Stephen King, their 'voices' are recognisable. Golding is a bit more elusive. I rather like the idea that he occupied his own bubble, a few decades too late for 'death of the author' modernism (Joyce, Woolf, Eliot) and just ahead of the angry young men. He does seem to bridge this gap to some extent, with short, sharp novels (the job's always done in a couple of hundred pages or so), ruthlessly efficient yet restlessly poetic.

Consistency of themes
Instead of an authorial style tackling varied subject matter, Golding represents almost the opposite: it could be a different writer each time, but each with their own take on the same story. His ongoing interest is forensically dissecting our capacity for weakness or evil - particularly, but not exclusively, in men (and WG apparently confessed to a tendency towards bullying/brutality in his own youth - which must be crucial to his later preoccupations). The boys in 'Lord of the Flies' show unthinking gang mentality writ large. Golding's interest in the classics, and particularly Greek tragedy, filter through in the way his later, over-confident protagonists bring about their own downfall: Jocelin in the masterpiece 'The Spire' is a textbook tragic hero, his apparent devotion to God morphing into self-aggrandisement, literally built on the shakiest of foundations.

Shifts in perspective
Golding's most memorable novels almost always involve a key moment in the book where you suddenly see things clearly - after being immersed in the enviroment Golding has carefully created, the novel punts you outside it so you can see what's really going on. In 'Lord of the Flies', this happens at the very end, when the adults reach the island and the viewpoint switches to the sight confronting the naval officer: a group of small, sobbing boys who only a page earlier had been feral warriors.

But please don't confuse these shifts with 'twist endings' - they don't always arrive at the last minute, and while they sometimes overturn what you thought you knew, they always expand and illuminate it.

'Pincher Martin' contains, for me, the most perfectly-realised examples of all of these characteristics. It's a challenging and confrontational read - it wouldn't be Golding otherwise. But you can expect an unblinking, coruscating character study, wrapped in a watertight enigma construction and, finally, a conclusion so arresting it will have you racing back through the pages - even starting a complete re-read - to check your facts, gather clues, and re-assess where you reckoned the novel was taking you.

Why not buy a copy and help ensure Faber keep it in print for the next 60 years?
Posted by Adrian at 16:51