Joining the dots: Lichtenstein at the Tate

The Lichtenstein exhibition currently at London’s Tate Modern is a brilliant thing. Fans of the work will be thrilled, I’m sure, at the amount of work on display and the intelligent way it’s been hung. Those, like me, who might only know a little about RL’s stuff or who are visiting out of curiosity, are bound to come away with their heads spinning with new images, information and inspiration.

To start: an anecdote (*throws log on fire, lights pipe*). About two or three rooms in, I noticed a man leaning down to speak to his grandson. (This is a guess, given the apparent age difference – no time available to carry out DNA tests.) The boy, clutching a pad and pencil, was asking about the dots in a particular picture – that is, he’d clocked RL’s signature approach of using evenly spaced dots in imitation of the ‘Benday’ printing technique for providing shading. The man said something like, ‘This is how it works,’ and gently backed the boy away from the painting. As soon as the child reached the point when the dots must have coalesced into a patch of colour, his eyes widened in understanding and he muttered ‘Ohhh...’ Grandad then marched him forward again and the boy began furiously sketching in his pad. He stayed with him, pointing at the patterns emerging on the paper and offering nuggets of encouragement.

Apart from thinking the Tate should buy this guy every pint he drinks for the rest of his life, I also realised how accessible RL’s work must be to the young. “It’s just like a big comic” – the ‘only one idea’-style criticism sometimes levelled at RL by adults – must become a massive recommendation to a kid.

It got me thinking about how pop, or pop-like, art could easily act as the all-inclusive, multi-generation entry point for any novice. Because of its focus on reproduction and repetition – the same thing that sometimes exposes it to ridicule – the genre, like pop music, has hooks and riffs the uninitiated can latch on to. Warhol print sequences can call to mind my old sticker and stamp collections; Riley’s patterns and swirls my first book of optical illusions.

Where this exhibition really scores, though, is by showing RL to be a questing and constantly evolving artist. After starting with experimental ‘brushstroke’ paintings – that is, making images of huge strokes as though painted with a giant brush – he arrived at the ‘false newsprint’ technique I mention above, with the dots appearing as an instant visual calling-card. The link being, I surmised, that at least at the start he was trying to make paintings about making paintings. By reproducing a comic panel (the famous ‘Look, Mickey!’ image) right down to the fuzzy, off-line shading, he negated the actual subject matter to a certain extent – who’s going to think about Mickey Mouse for more than a few seconds – and forced the attention on to how he actually did it. How are the dots that precise on that scale? How is the paint that even? I also think there is a comment here – and the child-like (NOT childish) aspect of this appeals to me – that comics and cartoons are also art, for everyone, not just the boy with the sketch pad. What better way to get them into a gallery?

Sensibly, the exhibition then delivers the ‘big’ paintings relatively early, because they are almost certainly RL’s ultimate expression along these lines. The other ‘greatest hit’, the massive comic panel called ‘Whaam!’, is exhibited with the original comic to show not only how uncannily accurate RL’s enlargement is, but also how he improved the composition to make the image many times better, as well as bigger.

There is a roomful of these fabulous, exuberant pictures – so often seen on postcards which give you no idea of the literal scale of RL’s achievement – and the space itself is large enough to allow you to stand back, let the dots merge and appreciate each image in its entirety, in comfort.

For me, though, the real treats of the show lay in the more unexpected avenues of his work that don’t seem to get nearly enough attention (or, er, at least they surprised the hell out of me). I was dimly aware he had produced some black and white work, for example, but had no idea of the range – from a glass of fizzing Alka-Seltzer tablets (with vertical lines erased from the dots to represent the liquid bubbling up ‘above’ its surface), to a graphic-design of a tyre that looks flat but springs into ‘false’ 3D life in front of you, to a canvas painted and cut to the shape of a transistor radio, hanging on the gallery wall from its strap. Thrilling stuff.

For an artist with such a distinctive style, RL’s work demonstrates the versatility of his approach. One wall presents an array of ‘mirrors’, although the mirrors are painted depictions of reflected light, the beams differentiated by the ever-present dots. He also made a series of landscapes and seascapes which, as you might expect, are highly stylised and at times almost featureless – but again force your attention on the process: in some, there are different grids of dots overlaid for a more complex colour effect, or in another particular example, the overall image appears across plates of Perspex to give the illusion of 3D.

A whole room, in fact, is given to ‘Art about Art’, which includes RL’s ‘cover versions’ of certain masterpieces he admired. It was interesting to see how occasionally this could be a bit pointless or reductive – I couldn’t see how his coloured shapes added to Picasso’s, for example – but when he took on an imitation of Monet’s cathedral series, it made much more sense to me. He acknowledged that all these works could be seen as parodic to a certain extent, but in this instance, where you have to stare at the dots until they form a coherent image, it really reminded me of how you have to carry out much the same exercise with the original. It felt like RL was expressing kinship, maybe, or acknowledging influence in a more meaningful way than just pastiche.

I didn’t find everything in the show an unreserved success: the ‘Perfect/Imperfect’ paintings, for example – where geometric shapes are first neatly arranged, but then spill off the canvas and physically jut out of the rectangular frame of the picture – felt like a self-consciously kooky idea among work that is otherwise so precise.

But I reckon RL saved the best for last, with his Chinese landscapes. 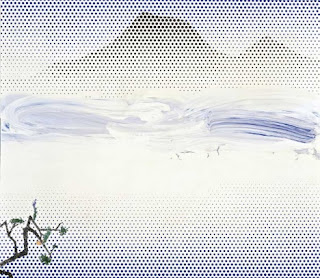 These paintings are just gorgeous, featuring now virtuosic use of the dot technique (where they vary in size to give depth and density) with beautiful pastel shades, and becoming some kind of marvellous fusion of ancient and modern poster art. Bold but tiny graphics – such as a philosopher or small boat – appear as minute details, almost lost in the abstract wash.