Brief alert - this production of 'Salome' carries a warning for adult images and themes... and to discuss it properly, I inevitably touch on some of those images and themes as well. So - please read after the watershed - and exercise discretion, as you will. Thanks!

Well, this has certainly divided opinion. The 'ayes' and 'noes' are separated as cleanly as John the Baptist's head from his shoulders.

Some people seem to have loathed the new English National Opera ('ENO') production of Strauss's notorious opera 'Salome' with every fibre of their being - while others have been stimulated and impressed. If I had to make a call, I'd say that the critics have been broadly negative (some perplexed or irritated, if not nakedly hostile), while audience reactions online have been relatively warmer. Plenty in both camps, however.

And of course, nothing is without context. Some who are prone to unkind pronouncements about ENO have continued in the same vein. (Some have imperiously dismissed the very idea of the production, only to cheerfully add that they haven't seen it. Helpful.) Also, 'Salome' has got about a bit recently and other versions may be fresh in people's eyes and ears. The current Royal Opera House ('ROH') production by David McVicar was last revived at the start of this year, when I saw it for the first time. Placing the action in a kind of totalitarian nightmare environment, it's held by many as a kind of gold standard - and I can see why. Opera North also presented an acclaimed version (which sadly I didn't get to) in the spring: powerful though that sounded, it was essentially a concert performance - so the company sidestepped much of the potential staging trauma that 'Salome' must involve.

Fast forward to the start of this season, and it's ENO's turn to revisit opera's most troublesome teenager. For those unfamiliar, the plot is taken directly from Oscar Wilde's play (based on the Bible story), with the composer editing down a German translation into a lean, mean libretto: a single, relentlessly-paced act, running to about one-and-three-quarter hours.

Salome, escaping from a palace feast and hearing Jokanaan's voice, demands to see the prisoner. Instantly besotted, she ecstatically praises Jokanaan's appearance, even while he vehemently rejects and denounces her. (The carnage starts early, as the guard Narraboth, who loves Salome, kills himself in dismay.) Herod, castrophically misreading the situation, thinks a dance from Salome will cheer him - and the evening - up. She eventually agrees, but only after securing a promise from him to grant anything she desires. Dance over, she demands Jokanaan's head on a silver platter. Herod does all he can to get out of the bargain, but Salome won't budge. When her stepfather ultimately gives in, and Salome receives the head, she finally tips over the edge and gives full vent to her lust. As she kisses the dead mouth, a horrified Herod orders his soldiers to kill her.

Even taking what happens at face value - the actual events of the original play and libretto - this is extraordinarily provocative stuff, careering headlong into some very dark psychological places. So extreme is its characters' behaviour, I can well understand why directors, let alone audiences, want answers, explanations. (McVicar's ROH production stages the infamous 'Dance of the Seven Veils' as a tableau of flashbacks suggesting the Herod has abused Salome in the past.)

This production starts in a very dark psychological place, and never leaves. What we see is the product of an all-woman creative team: director Adena Jacobs, stage designer Marg Horwell, lighting Lucy Carter, and choreographer Melanie Lane. In an ideal world, this would not be remarkable, or even especially 'meaningful'. But for this opera, I feel it has particular significance. It means that whatever queasiness or discomfort we might feel at the potential exploitation or objectification of Salome (or any of the other characters) cannot be put down to straightforward sexism or misogyny. If anything, this was going to hold a mirror up to the 'male gaze' and rightfully cast it, blindingly, back in our direction.

The staging seems to be entirely surreal/symbolic, not rooted in any kind of reality. Both background and costumes are uniformly black, as if nodding to the not uncommon 'repressive regime' style of staging to signify dystopia. But this is one of a number of instances where the production subverts expectations as it goes along. Rather than present Jokanaan's cistern as a dark dungeon, the stage is saturated in bright white light, as if referencing both his holiness and his uncomfortable illumination of the rotten society around him. The initial blackness also gives way to gaudy colour, both in an enormous, pink, decapitated 'My Little Pony'-style horse which appears as the centrepiece of the feast, spilling out its entrails of fake flowers, and in the glittery decayed decadence of Herod's and Herodias's outfits. 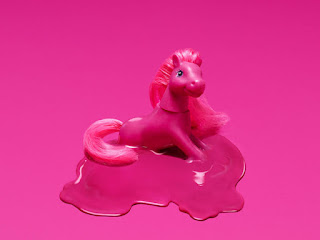 Salome's loss of innocence and, ultimately, sanity is telegraphed early and built on step by step, following its own logic but pulling the rug out from under our, and the opera's, feet. Almost everything around her in the production could double as a cipher, contributing to this development. When Jokanaan is first seen, flat out on the ground, he is clad only in briefs... and a pair of red stilettos. He never walks in these - he kicks them off well before he stands up - and if you wanted to make a plot point out it, you could imagine Herod (something of a cross-dresser himself) and a bunch of cronies taunting the captive and dressing him up. But I was also struck by the timing - Jokanaan kicks off the shoes and in some way seems to transfer a kind of sexuality, or at least sexual awakening to Salome. While Jokanaan is present and still very much alive, Salome strips to the waist while singing her lust for him, and (discreetly) masturbates while he preaches. (This is one aspect where I wondered if a woman directing has flagged what a bloke might not even have observed - that Salome is not a two-dimensional maniac who only reaches sexual fulfilment through necrophilia: rather, there are stages along the way before the madness provides the only release. Equally, if a male director had stripped Salome at this point in the opera, would we be able to assume something similar or might we doubt his motives? Questions, questions.)

There is a third piece of 'clothing' for Jokanaaan that I didn't mention: a skeletal mask that at first I took to represent a kind of torture instrument. However, it held a miniature camera, pointed back towards his face. As a result, a large, live projection of his mouth appeared on the back wall - in black and white, with the effect of looking slightly grimy/grotesque. This pointed up Salome's obsessive attraction/repulsion towards the prophet's mouth; it drew attention to his dark utterances; and it foreshadowed the expected kiss once his head is severed.

So it goes on. Narraboth's suicide results in a pool of pink blood on the stage. (Herod at various points returns to this, smearing himself in the gore as if he cannot remove the stain on his character.) Salome falls on Narraboth's body before it is removed, using it as a substitute for the unattainable Jokanaan. The floral guts of the suspended horse can be read as a 'deflowering' motif. Salome reappears as a kind of fetishised Lolita figure: white vest, black hot pants and trainers - later, this youthfulness will be underlined further as she flings aside her long blonde wig to reveal a boyish crop.

By this time, with a few taboos not just broken but smashed into a pulp, I wondered how hard the production would stab at the outrage button. With its burlesque/striptease pedigree (and the fact we'd already seen a half-naked Salome), what kind of 'Dance' were we going to get here? In the event, Jacobs takes another swerve. This Dance was brilliantly disturbing, with Salome - clothed throughout - slowly, deliberately assuming a brief sequence of poses (almost like coquettish exercise moves: turns, bends and stretches), then reclining while a group of cheerleader-dancers ramped up the speed and sexual tension.

Following this thread, when the head is finally delivered to Salome, the 'silver platter' is a cheapo plastic carrier bag - never opened. She cradles the concealed head but never 'consummates' her obsession with the kiss. It’s as if the production puts the brakes on the body horror once the psychological damage is done. Herodias appears behind Salome and you wonder if the mother will carry out a mercy killing at Herod's command before the soldiers arrive. In the closing seconds of the opera, Herodias - still directly behind Salome - helps her daughter raise a pistol and point it backwards, horizontally, directly towards her mouth. Is this the actual kiss of death? And if the gun is fired, both women would likely die in a double suicide. (At this instant, we recall Herodias's treatment by Herod and the circumstances of their marriage.) The lights go out before we hear the shot.

As I applauded, my head was spinning. This was an assault on the senses, and I approved. The production isn't there to make friends, but to kick arse. Making the case that a piece of vintage art - whether it's a period novel, Shakespeare play, or an opera - is Relevant To Today's Society can so often be problematic, because you can be passionately and genuinely keen to prove how the medium you love still speaks to modern times, while simultaneously being aware it can lapse into cliché. But given the ongoing reports we're now seeing of the horrifying - and shamefully widespread - treatment women receive at men's hands … is there a more appropriate story than Salome's to illustrate its devastating effects? 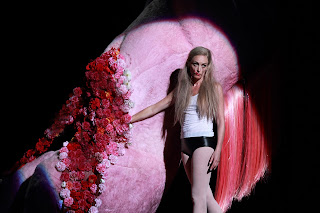 None of it would convince, of course, without utterly committed performances - and we got those. Allison Cook, playing the title role for the first time, was fierce and fearless, singing with subtlety as well as power, and with such consistent character acting that it was hard to take your eyes off her during her significant time silent onstage. David Hoar as Jokanaan struck the balance between intimidating/commanding while prophesying, and the wracked melancholy of the doomed. It was also great to see some of the chaps from the mighty ENO Chorus - Robert Winslade Anderson, Trevor Bowes, Ronald Nairne and Adam Sullivan - cast in roles that allowed them to make their impressive, individual marks.

The ENO Orchestra under the company's Music Director Martyn Brabbins also deserve to share star billing. Rather than bludgeon us with high-octane hysterics, the sound was full of space, the Coliseum's acoustic almost providing a sense of 'stereo separation', all clarity and detail.

I think, then, that this is a vital and necessary production. It doesn't really matter to me that some people don't like it. I didn't like all of it and I didn't necessarily think every idea worked. (I thought the horse, for example, was too much of a distraction. The point I felt it was making seemed to be nailed more effectively elsewhere.) But I did like having these ideas thrown at me, challenging my preconceptions about the opera - both its story, and the wider issues it forces you to confront.

ENO has been - and can be - many things to many people. One piece of its jigsaw identity is as the alternative, occasionally rebellious, and even stroppy younger sibling of the grander ROH down the road. I think the grandeur of its own home venue, the Coliseum, sometimes makes it easy to overlook this side of the company's personality - and the brilliance of ENO Studio Live (and similar ventures) has helped to bring some of that punkish, guerrilla spirit back to the fore. That approach may always risk imperfections, but for me, this new 'Salome' is a welcome, dangerously contaminated, shot in the arm.
Posted by Adrian at 16:02