If you've been around these parts before, you may recall my writing in the past about Sieben - the alter ego of Matt Howden, singer, songwriter, violinist and all-round sonic magician. (In fact, you can read my write-up of his latest album, 'Crumbs', here - it's a formidable set of protest songs, channelling a tangible sense of rage through such intricate and complex playing. Warmly recommended!) 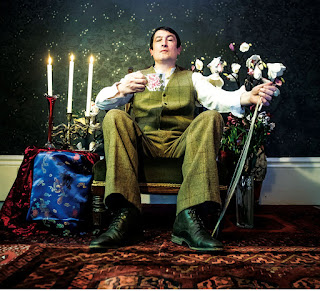 Sieben gigs in London don't come round all that often - at least not as often as I'd like - so I was thrilled to find MH heading up an intriguing triple bill, arranged by Kaparte Promotions at the pleasingly intimate Servant Jazz Quarters in Dalston. The other two artists were completely new to me: Andy Whitehouse and Kate Arnold. (Both have full bands - AW, The Silver Darlings, and KA, Fear of the Forest - but for tonight's gig they were playing as solo artists.)

Andy Whitehouse was first on, and instantly brought the room to an attentive hush. His songs have an insistent gentleness, a quiet confidence that you will willingly succumb in your own time. His lyrics succeeded in being both witty and wistful simultaneously - for example, his tale of customising saints for one's own personal use, 'Anthony and Rita', has an aching sadness at its heart, while making you smile at how skilfully the metaphor is sustained through the song.

I was also very taken with the guitar sound and style - quite unusual to hear electric guitar in this context compared to how often acoustics turn up, but perfect for this musician's soulful restraint. It charged the atmosphere with warmth. A lovely start to the evening.

Kate Arnold's set then took us off in a completely different direction. At the start, she tipped her hat to a traditional folk sound - fiddle and voice - for her song 'Shanty'. But suddenly all bets were off, as she began playing the hammered dulcimer - stroking it, tapping it, even bowing it - and layering beats and melodies to form 'Skeleton Key', a genuinely jaw-dropping track that conjures up glitchy electronica on this chiming, brightest of instruments.


(Kate Arnold playing a version of 'Skeleton Key' from YouTube, brilliantly filmed during a Daylight Music gig at the Union Chapel, Islington.)

It was an all-too-brief, but brilliantly constructed set, because hearing these two 'extremes' of KA's approach gave the ideal context to hear her remaining songs - as if the 'skeleton key' really did unlock her sound for us. The beautiful 'Fairy Tale Ending' is all the argument you could want for the dulcimer as sole accompaniment - coupled with her natural, affecting yet unaffected vocals, KA has somehow married a kind of 'roots' music to something otherworldly: as if you could reach for Dead Can Dance and Fairport Convention as reference points at the same time. Sincere, spectral and quite wonderful.

Rightfully, and righteously, Sieben's set then lit a fire under the whole gig. Live, MH loops and layers percussion sounds, basslines and hooks on the violin before singing over the whole heady brew. A restless musical craftsman, he continually pushes the violin/electronics set-up as far as it will go, reinventing his sound as his lyrical concerns change over time. He's gone pastoral, personal and now political, galvanised by the injustice and greed around us into producing a genuinely angry, bitingly satirical suite of songs: on stage, this results in a kind of punkish, yet puckish fervour. Always an animated, energetic performer, tonight it was like the stage couldn't contain him, and any minute he'd career out into the audience, taking someone's eye out with his whirling bow.

This idea of the anger almost boiling over and out of the music is all there in the arrangements, with many of the 'Crumbs' tracks featuring a relentless motorik pulse and grindingly deep riffs, before MH performs more solos on the fiddle than ever before, their explosive speed and agility seemingly providing a necessary outlet. 'Sell Your Future' sounded like a train that had already been derailed; 'Coldbloods' walked the tightrope between resignation and panic. It's been a great pleasure to follow Sieben live over the years, as older songs are re-cast in the newer sound: one such classic tonight is 'Love's Promise', a sensual ode which here becomes a slinkier, slightly more seedy beast - again, this time bringing out a lustfulness, more impulses that might be difficult to suppress.

The gig closed with all three performers gelling perfectly in a rendition of Andy Whitehouse's song 'Almost Home'. It struck me at this point - to the credit of Klarita, of Kaparte Productions, who organised the event - what a superbly programmed evening this was. It felt that buried in all their musical influences was a 'folk' sensibility of sorts - not necessarily trad folk, new or alternative folk, folk rock or any genre as such - more a connection to home, a gesture towards chronicling something that deep inside we all recognise - but then fractured and reassembled in the most diverse and creative ways imaginable. A shared brilliance.