I was asked by Frances to review the latest album from Rick Wakeman - as I'm as much 'prog' as 'piano', this proved to be a happy assignment. Here's my write-up.

Rick Wakeman has been a consistently fascinating artist throughout his decades-long career. As a fan of both classical and progressive rock music, I feel he’s been a constant presence, his cape sweeping nonchalantly across any so-called dividing lines between genres and styles.

In contrast to the grandeur of some of his earliest and most familiar work, Wakeman’s most recent releases have felt more intimate and introspective. The 2017 album ‘Piano Portraits’ was just that: solo piano treatments – somewhere between arrangements and variations – of an eclectic range of pieces that covered Debussy and Fauré, Elgar and Holst, Bowie and the Beatles… and not to leave out his own band, Yes.

This new album, ‘Piano Odyssey’, is in many ways a sequel with seemingly deliberate echoes of its predecessor. As before, there are two Beatles tracks, and just the one from Bowie this time, amid other carefully chosen cover versions. Yes is represented by two new arrangements. On the classical team are Liszt, Dvorak and Handel. 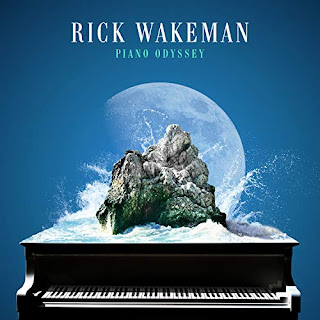 As the album title suggests, though, a journey of some kind has taken place. Rather than simply repeat himself, Wakeman has added strings and a choir more or less throughout, diluting the forensic focus on the lone piano. However, the lush arrangements can’t disguise the fact that this feels like an even more personal project, surveying Wakeman’s career more incisively and giving it a perhaps unexpected unity.

I think this unity is behind the quality I loved most about the disc, which is that it sounds exactly like something its creator would pull together – and yet at the same time, it feels like a surprise, not quite like anything else. In theory, given the forces involved, the classical feel should dominate, but that isn’t what happens. Instead, it’s rather more like listening to a kind of ‘chamber’ prog: Wakeman often deploys his string players and singers as if they were band members, the choir in particular performing ‘solos’, moving in and out of tracks as needed rather than saturating them. His own distinctive playing has him operating like a combined rhythm and lead guitar might, capturing the melodies at the top end with great delicacy (and some very agile embellishments!), without sacrificing a sense of real propulsion.

As a result, the pieces that really hit home for me are the two Yes songs, in particular ‘And You & I’, and the reworks of two of his solo tracks, ‘After the Ball’ (now merged with Liszt’s ‘Liebestraume’), and ‘Jane Seymour’ (originally composed on organ, and with Bach coursing through its bloodstream). In the CD liner notes, Wakeman explains how the new versions make what he was trying to do clearer, more audible. And there’s no doubt that ‘Piano Odyssey’ is giving him the opportunity to shine a light on his practice: without trying to ‘match’ or ‘outdo’ Liszt, he has deliberately designed his medley to show how the composer influenced him. (Elsewhere, he uses this technique to illuminating effect in ‘Largos’ – merging Dvorak and Handel with the utmost respect, but a refreshing lack of deference.) Equally, in ‘And You & I’, the sparkling high-pitched melody is so evocative of Jon Anderson’s vocal it’s somehow uncanny.

I don’t think the record is totally flawless. How you react to the more familiar covers will inevitably depend on your relationship to the originals, and what you want a new version to achieve. I felt ‘The Boxer’ was a misfire: to me, the song, while tender, has an underlying resolve and pugnacity that befits its title. Here, the slow pace fatally weakens it, along with oppressive strings and the choir contributing isolated ‘lie la lie’s with no context. On the other hand, a similarly sentimental treatment of ‘While My Guitar Gently Weeps’ fits the song like a glove. The version of ‘Bohemian Rhapsody’ is shot through with wit, subverting any bombastic expectations the listener might have – even Brian May’s guitar cameo appears out of nowhere.

Two completely new compositions again emphasise the personal – named for two adopted moon bears, Rocky and Cyril (Wakeman is a passionate animal rights advocate). Writing from scratch in this idiom allows Wakeman to produce probably the most nakedly emotional tracks on the record, the signature traits (again, the steady motor, the climb to the high register) reflecting how much of himself he has put into these pieces. And I think it’s fair to say that the whole album – a heart-on-sleeve musical autobiography-of-sorts – wins through as an accomplished yet totally sincere attempt by the artist to communicate a true audio sense of himself.