It's no secret (well, not to anyone who regularly reads this blog, anyway) that I'm a card-carrying champion of English National Opera's endeavours - so their yearly season announcement is the one I look forward to the most.

This week, we heard what ENO has to offer during 2018-19 - and I'm genuinely excited by what's in store. Especially given the fact that it's still building back up to full strength (see posts and news stories over recent years, ad infinitum), it has pretty much everything I'd look for in a new season, from my punter's point of view. One of my favourite productions of all time is returning; there are pieces I have never seen at all; there's a brand new opera to look forward to; and at least one heroically 'out there' idea. Here's the line-up for the 'main season' at the Coliseum.
In fact, it's difficult to decide what I'm most excited about. 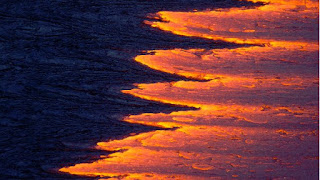 When Phelim McDermott's production of 'Akhnaten' debuted in 2016, I really thought it was akin to perfection. Loving Glass's music helped, of course (I know he divides opinion). But ENO's Orchestra really have the measure of this composer, oiling its clockwork rhythms and injecting a soul into the machine. Up on stage, the ENO Chorus mastered not only the vocal demands but also intricate, tightly choreographed movement (juggling included!) that gave the score an extra dimension. With several of the cast returning - including the superb Anthony Roth Costanzo in the title role - this promises to be unmissable a second time round. I'm going again. At least once. Ideally with everyone I've ever met.

Also worth mentioning the return of 'The Magic Flute' in the shape of Simon McBurney's brilliantly inventive production - and featuring the irresistible lead pairing of Lucy Crowe and Rupert Charlesworth.

'Salome' is a particularly intriguing prospect, kicking off a season that artistic director Daniel Kramer says will explore masculine/feminine relationships and question or interrogate the patriarchy. This new production will be directed by Adena Jacobs, renowned for theatrical work very much in line with the season's theme. Can't wait to see what she does with her terrifying lead character.

I am thrilled to have the chance to see 'Porgy and Bess' - I feel like I know and love almost all the songs (although in truth, I'm probably more familiar with the Miles Davis album than the original work). While I confess most of the cast are not known to me, ENO-watchers will no doubt jump at the chance to hear Latonia Moore again, after her superb performance as Aida last season. And it will be good to hear Americana enthusiast extraordinaire John Wilson - well-known for his show-tune revivals and extravaganzas at the Proms but, top tip, check out his Copland CDs on Chandos - conduct at ENO for the first time.

'Porgy and Bess' requires a specially-assembled chorus - but obviously, I look forward especially to productions that make the most of ENO's own Chorus. Apparently, both these ensembles will join forces for the staging of Britten's 'War Requiem'. Britten, like Glass, is another composer for which ENO has a definite 'affinity' - and this is a signature project for the new creative team, with Kramer and music director Martyn Brabbins joining forces. (This is also the first season they have programmed together since their appointments.) Add to that the involvement of Wolfgang Tillmans - a photographer who, in my opinion, makes a great deal of startling, powerful work - plus soloists Emma Bell, David Butt Philip and Roderick Williams... it's a must.

(Also pleased to note that 'Lucia', 'Merry Widow' and 'Bohème' all feature Choral input! The first two will also lift the hearts of ENO regulars for featuring the wonderful Sarah Tynan in the lead roles: her recent star turns as Partenope and Rosina still linger happily in the memory.)

The same leadership team of Kramer and Brabbins are collaborating on Iain Bell's new opera focusing on the women living in fear for their lives during Jack the Ripper's reign of terror. We're promised a 'showcase for the entire ENO ensemble' (according to the season brochure), not to mention an incredible cast. Also good to see that this is a co-production with Opera North, another admirable company, and an alliance that could see new operas like this get an extended lease of life around the UK and hopefully a stronger push into the repertoire.

During the summer, ENO goes walkabout with two collaborations:
If you're an ENO 'Solo' Friend (sounds a bit lonely, but there are lots of us), you can start booking from 8 May. Yikes, 'tis nearly upon us. Otherwise, booking opens to the general public from 22 May.

Here's a link straight to the ENO website - go take a look. I hope you will join me in seeing as much of the season as possible.