Liner notes: a trip to the V&A

Isn't it great when an experience - concert, play, film, exhibition, you name it - takes you completely by surprise and blows you away? That happened to me this weekend when I went to see the exhibition 'Ocean Liners' at London's Victoria & Albert Museum - commonly known as the V&A.

For those of you unfamiliar with the V&A, it's in a kind of 'museum quarter', South Kensington, which is also home to our Natural History Museum and Science Museum. These latter two are solid family and tourist attractions, wielding dinosaurs, blue whales, machinery, and lots of buttons to press - arguably, between them, they're the main reason South Kensington can often look a bit like one of those dystopian horror films, where the children have killed all the adults and taken over the world.

Sitting alongside these two cauldrons of mayhem, the V&A is a little like the eccentric cousin who couldn't settle, wandered abroad for decades and come back with a whole load of interesting stuff to show and tell you. Self-branded as 'the world's leading museum of art and design', its broad remit allows it to lay before you the ways various peoples and places have chosen to present themselves - a kind of global image bank, covering anything from fashion to furniture, musical instruments to architecture. 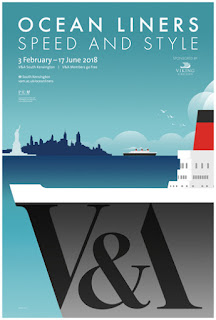 'Ocean Liners' initially sounded a little niche to me. Mrs Specs, a student of old-world society and glamour, suggested we go and I was happy to accompany her - I knew that at the very least I could expect to see some superb examples of graphic design in the various posters and advertisements that would be on display. That sort of thing always, er, floats my boat.

Those stylish images are more or less the first thing you see on entering the exhibition. When we emerged, blinking, a couple of hours later, it was clear we'd been absolutely knocked for six, heads full of unforgettable imagery, dozens of top facts that we hadn't previously been aware of, and that all-important sense of wonder. You could add in a slightly chilly sense of imposter-nostalgia for an age that we didn't actually experience, and was of course, far, far from perfect.

Alive to potential social media enthusiasm, the V&A allows photography throughout the exhibition (except for a few fragile artworks which presumably could suffer if visitors started flashing at them)... so for the rest of this post I will try and say relatively little, and trust that the snaps I took will give you a sense of the show's scope and scale... an idea of how fascinating it turned out to be.

Rest assured, though, that these images are only a scratch - or perhaps a ripple - on the exhibition's surface. If you are from or around the area and can see this, please try and go - it's on until 17 June.

The size and grandeur of the great cruise ships was a key point of emphasis in their publicity material - not just in the posters, as you'd expect, but in other materials: like the illustrated booklet comparing the length of the Queen Mary to the world's tallest buildings.

(I was also pleased to see one of my favourite poster designs - which had, to my mind, a strikingly modern, abstract/symbolic feel - somehow echoed in a later, futurist painting. One point to flag - the poster was too high up for me to get a decent shot, so this is not my photo. In a moment of supreme cunning, I have captured the design from the - ahem - accompanying fridge magnet image.) 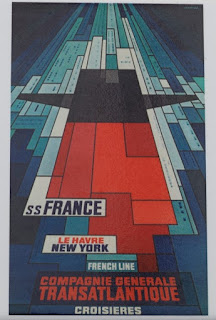 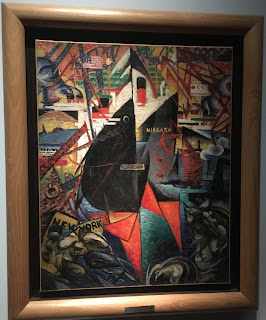 The exhibition also evokes the sheer vastness of the liners with some exquisite scale models... 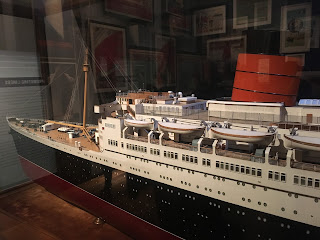 ...including this staggering cross-section (I hope the second shot will convey the level of detail - we could have looked at this for hours): 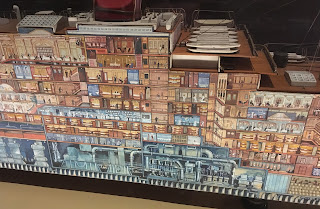 There are plenty of artistic representations of the luxury to be found on board - by the first-class passengers, at least - including the most well-appointed playroom I've ever come across (even Mr Punch - or someone similar - seems to be somewhat taken aback)! 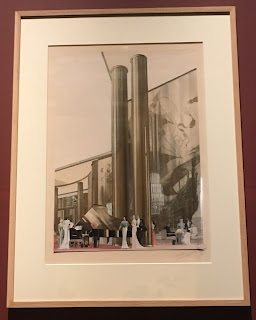 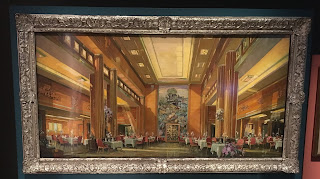 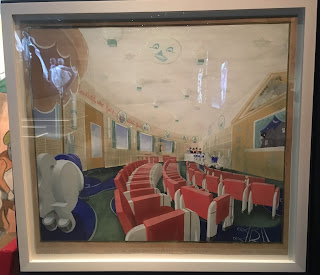 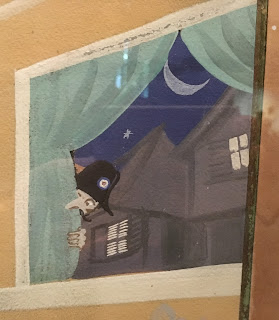 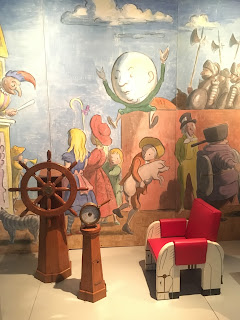 The V&A's major exhibitions do their utmost to place you inside a space, give the experience three dimensions, and 'Ocean Liners' is no exception, with actual examples of panelling, décor, furniture and other features preserved from the ships. 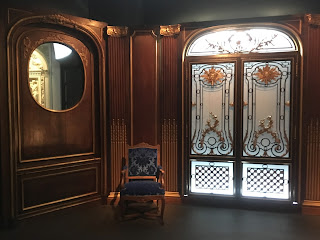 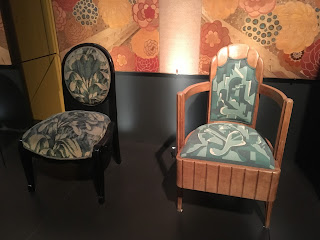 The largest room in the exhibition has an almost playful feel, bringing fashion and glamour to the fore - we go briefly 'on deck' in front of a projected ocean, and turn to find a 'virtual' representation of a long staircase down towards an imaginary ballroom dancefloor. 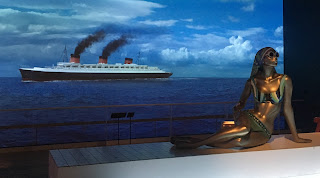 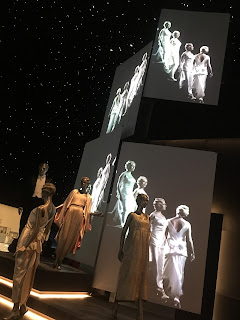 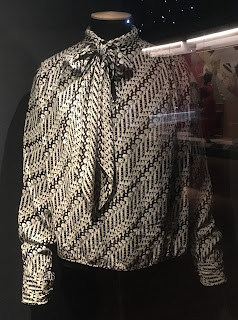 But the exhibition never loses sight of the social and historical environment through which these ships sailed. The rigid passenger hierarchy is clear from the Cunard poster showing how much of the vessel's space was accorded to each class, and later advertisements - as the age of cruise ships began to fade with the arrival of flight - reflect the way travel itself seemed to become more widespread, even democratic. 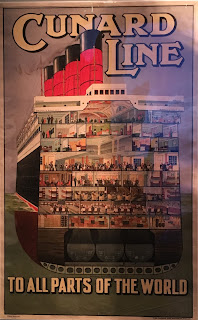 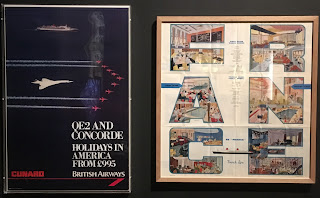 Finally, war casts its inescapable shadow over the water. As the liners were pressed into military service, they wore the striking 'dazzle' camouflage paint. The medal you can see below - depicting the sinking of the Lusitania - has the strange distinction of being used as propaganda by both Germany (claiming the ship was carrying out military duties) and then Britain (calling out the Germans for the attack on civilians). 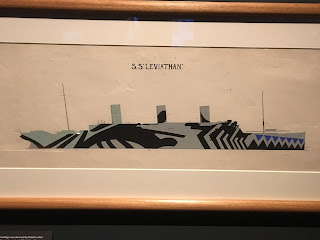 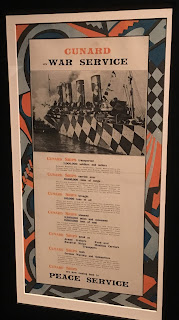 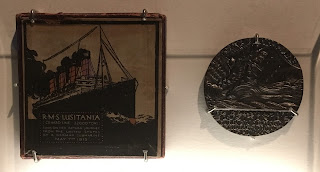 I was perhaps most struck by these two exhibits - a Madonna & child and a Torah ark - displayed side by side, both from the Queen Mary. With Europe about to enter another period of darkness, many passengers seeking a new life - and safety - abroad were Jewish. As such, the liner housed both a chapel and synagogue. Given current world events at the time of writing, I think this diptych of inclusivity will haunt me for some days. 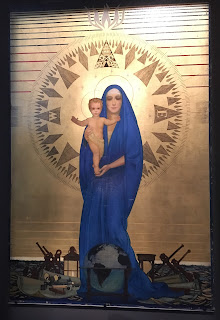 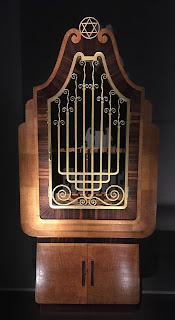