It's impossible for me to consider the new line-up in a context-free 'bubble' - many of you will know (especially if you've read this blog for a while) that ENO faces serious financial difficulties. The company is the victim of severe funding cuts from the Arts Council, a move that in turn appears to be meant as some kind of wake-up call in the light of past mismanagement. (There is allegedly all sorts of murkiness here which I've no intention of raking up or speculating about.)

However, the new top brass have explicitly made a grave error of judgement - wholly in keeping with a hard-nosed, short-termist, number-crunching attitude but showing zero idea of how artistic endeavours actually come into being... by targeting the chorus for 'cost efficiencies'. This plan will result in the loss of several chorus members and leave the remainder on part-year contracts. (The spurious notion is that the chorus are apparently 'not working' when not physically treading the boards of the Coliseum, their home venue. First - this is untrue, as anyone practising to keep a voice in shape or preparing for a part would tell you. Second - the relative security of full-time employment enhances bonding and working methods within a group - with this chorus being a shining example of how a tight-knit artistic community can produce such consistently outstanding performances.)

It's important to underline that this is not just 'any' chorus. They are on the chorus shortlist for this year's International Opera Awards, and with the ENO orchestra jointly won this year's Olivier Award for 'Outstanding Achievement in Opera'. They are world-class, among the very best anywhere on the planet at what they do - which is all the more reason to wonder at their treatment. What kind of employer imposes penalties on its best performers?

It's important to re-state this, because I'm about to encourage you to go to as much as possible of ENO's new season. I don't want anyone to confuse this with endorsement for the board's approach - it's the magnificent performers I support. This is the arts, and sanctions will not work. I plan to see any many of the productions as possible, and want you to do the same, for two main reasons:
It's been noted that there's possibly less 'adventurous' programming than might've been expected - but I wonder if that's actually a bit misleading. There's less of everything. (The stated intention is to build the number of productions back up again.) It's a short season, because in summer 2017, the plans are to take ENO out to other venues - including a new chamber opera at the Hackney Empire and 'The Dream of Gerontius', semi-staged at the Southbank Centre - and, presumably, rent the Coliseum out to money-spinning musicals, or similar. 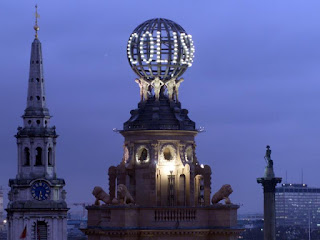 (Coliseum image from ENO website - could not see photo credit.)

I'm actually quite keen on the idea of getting opera into more unusual venues and perhaps surprising some unsuspecting listeners. High-profile efforts along these lines would include the Royal Opera heading into the Roundhouse and the Globe ... but let's not also forget Opera North's appearances at the Latitudes festival. The more people that have the opportunity to hear ENO's wonderful singers and musicians, the better. (And the more work there is for them, the better, too.)

In the meantime, here is what will play at the Coliseum between September 2016 and March 2017:

I won't repeat all the details here because I would much rather you head over to the website and browse the details for yourself. However, the casts ENO attracts are tremendous - across the productions, just the superb singers I happen to know (and remember I'm still something of a newbie) include: Mary Bevan, Sophie Bevan, Allan Clayton, Sarah Connolly, Gwyn Hughes Jones, Iain Paterson, Christopher Purves, Christine Rice, Andrew Shore, Nicky Spence, Willard White... on top of their incredible support team. [LATE EDIT: Since first posting this, I've been alerted to some interesting points about the operas chosen - please see the 'extra' section at the end.]

It's also worth pointing out a few nuggets, perhaps:
So, what are you going to see? Take people. If you like something, recommend it. Or better still, go again with the person to whom you've raved about it. I might even condone mild kidnapping. Do you know someone who wants to get into opera - or showing flickers of interest? (In my case, this is my mum and dad, which could prove interesting. Might not take them to 'Lulu'.) 'Don Giovanni', 'Tosca' or 'Rigoletto' will do very well. Especially if your companions like thrillers, and 'Rigoletto' in particular for lovers of old movies.

It's the best place I can think of to 'discover' opera - sung in English (but still with surtitles to help you out), to the finest artistic standards by reliably brilliant performers. Accessible - but also impeccable.

* * *
LATE EDIT: Apart from the reference to this footnote, the above post is essentially as I originally wrote it, and I stand by what it says. I was trying to genuinely show optimism for the season and encourage as many of you as possible to support the work, without downplaying the ongoing dismal treatment of the chorus. However, I've since benefited from others' greater knowledge.

Ruth Elleson is one of social media's great champions of opera, combining an encyclopedic knowledge of both opera and its houses, with enormous reserves of support and enthusiasm. (If you have any interest in the subject, please head over to Twitter and follow her.) With her permission, I'm posting a capture of an exchange (from a separate forum) where - as a chorus singer with various ensembles herself - Ruth has noticed, and pointed out, how little use the new season seems to make of the chorus. All I can do is re-double my efforts to support them publicly, make sure my bum is on plenty of their seats over the season ... and carry on watching the situation closely. Many thanks for sharing this, Ruth. 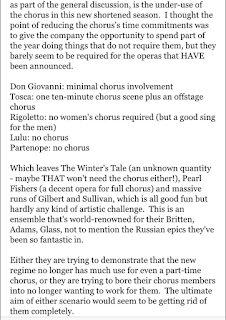