Frozen in time: 'The Dark Mirror'

Schubert's 'Winterreise' is arguably the greatest art-song cycle ever written. But it got off to a famously rocky start. The composer found 12 poems from Wilhelm Müller's sequence and set them - only to discover the other 12 later on (which is why the overall sequence of the cycle differs from the Müller original). He performed the first batch of songs enthusiastically to a gathering of utterly baffled friends, who couldn't find a way into their overarching melancholy. At the time, Schubert said they were his best work, and that the group would come to like them as much as he did.

'Winterreise' ('Winter Journey') is sung in the persona of a traveller, walking away from the town where he lost his true love. (This isn't opera, so for once she isn't dead - but has moved on, making a good marriage to someone else.) Song by song, he appears to 'progress', but how far he actually gets is not clear: in a state of existential despair, he addresses landmarks, objects or natural phenomena that all drive his thoughts ruthlessly back to his ex: from the weathervane on her house, to the postal delivery from the town; from the snow in the meadow where they walked, to a falling leaf (like his hope) and a cold, grey morning (like his heart). Finally, he meets a mysterious hurdy-gurdy player, and suggests they travel together, playing his songs.

The appearance of the hurdy-gurdy man could mean 'death' or 'journey's end' - it feels impossible to separate the searing angst of 'Winterreise' from Schubert's knowledge that he was dying while working on it. But of course, the words are Müller's, not Schubert's - and it seems more likely (given the droning nature of the instrument and the lyrical reference to how 'everything keeps turning') that the traveller must, in fact, keep going for ever. I also think there's a strong implication that the hurdy-gurdy player is hanging around in the same place, as if the traveller has got nowhere. After all, the cycle can easily withstand modern/psychoanalytical interpretations - for example, whether the journey is in fact all in the protagonist's mind. It's also - I believe - gender-blind (we know the lost love is a woman, and there was 'talk of marriage' - so, while by convention, the protagonist has to be a man, I can't find a clearly-stated reference to the traveller's sex). This is perhaps reflected in the increasing number of recordings by women - mezzo Alice Coote's rendition (recorded live at the Wigmore Hall with Julius Drake) would easily be one of my desert island versions. [EDIT, some months later: I've since changed my mind slightly about this - I now think it more likely that the 'voice' of the piece is definitely male, and that women performers approach it like a 'trouser role'. It seems to be part of loving 'Winterreise' that one constantly keeps re-thinking it - so no bad thing.]

While the original version of 'Winterreise' - voice and piano - marches deathlessly on, it seems to be one of those masterpieces that compels artists to get under its bonnet and tinker with it. Perhaps it's human nature to want to understand or explain how perfection can occur. (The other examples that leap to mind are Bach's works for solo violin or solo cello, constantly cropping up in versions on other instruments because their magnetic pull is too great for musicians to resist.) To my limited knowledge, 'Winterreise' - or parts of it - has been arranged for solo piano, piano trio, string quartet ... and, here, chamber orchestra.

Zender's arrangement dates back to 1993. Before hearing it, I wondered to what extent it would be a 'deconstruction' or dismantling of the original, but I think it is in fact a work of ardent respect. Instruments are used where appropriate to create sound-effects. Elements here and there feel tweaked and tampered with, but the most deliberately obvious 'sabotage', for shock value, are the few moments where the singer gives full vent to their anguish, departing from the melody into a cry or roar.

This is probably one reason why the key influence on the piece for me is Weill/Weimar, with moodswing winds and accordion providing that distinctive, sinister allure. It's a perfect match for 'Winterreise', with its queasy, nihilistic beauty... that placing of resolve, even humour alongside a knowing fear or despair. 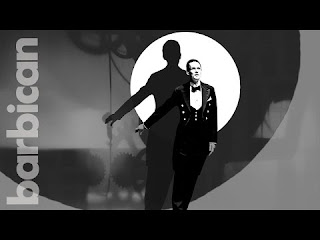 (This image is by Tristram Kenton / Lightmap.)

At the Barbican Theatre, then, for 'The Dark Mirror', a production - or perhaps 'realisation' - of Zender's 'Winterreise', directed by Netia Jones and performed by tenor Ian Bostridge, with the Britten Sinfonia, conducted by Baldur Bronnimann.

The stage is almost bare, but for a tree on one side, and the orchestra on the other. Central is a huge, black rectangle (defined at its edges by small bright lights), with a platform crossing it at an angle. As the first song, 'Gute Nacht', begins - stretched into agonising sparseness - a spotlight slowly illuminates IB, sitting on a chair near the top of the platform. He sings with his face still in shadow, until delivering the first of Zender's jarring howls - when he turns to face the audience, and we can properly see he's in black tie, with white face make-up rendering his features gaunt and eyes cavernous. Bleached-out footage of a howling wolf plays behind him in the white of his spotlight. The effect is genuinely chilling, and the silent audience are hooked from that point on.

Bostridge has an especially close relationship with 'Winterreise'. I believe he has sung it for at least as long as he's been a professional (just over 20 years), performed and toured it with a number of pianists, and recorded it twice: a recital performance with Leif Ove Andsnes on piano, and some years before that, in a film - a kind of extended classical version of a 'pop video', semi-dramatised with sumptuous visual effects and an incredibly youthful-looking IB, already nearing his mid-30s, accompanied on piano by Julius Drake. (It's available on DVD in a bargain package with his recordings of all three Schubert song cycles, should you fancy a look.) Most recently, he's written an entire book devoted to 'Winterreise', with the revealing sub-title 'Anatomy of an Obsession'.

Bostridge is a 'love him or hate him' singer (I'm in the former camp), who makes a beautiful sound but sometimes chooses not to - in moments of high intensity or stress in a performance, he'll unleash an uglier timbre or increase his already hyperactive stage movements. I'm all for this - I can't shake the feeling that Schubert would've approved of someone giving themselves up so completely to the euphoria/tragedy of his lieder that (a) they look like they might need medical attention afterwards and (b) they seem to not care less about whether you like what they're doing or not. So detractors might see him as 'mannered' or 'aloof', but if so, I regard this as completely performance-enhancing, and tend to sit enthralled at his recitals.

Netia Jones (who combines video art with her live stage direction), recognising the vice-like grip 'Winterreise' has on the singer - and in particular seizing on the existence of the 1997 film - has created a concept that will only work with IB at its centre. Once we get going into the cycle proper, the bare rectangle on stage reveals jagged black divisions that look like cracks, as excerpts from the film are projected behind our 'live' Bostridge. The man himself goes through three outfits, which seem to carry personas with them: the cabaret singer of the opening; then - in a brilliant visual coup - he appears in the same outfit we've been seeing him wear in the film projection; then, finally, he emerges in modern white tie.

Jones weaves cleverly-shot new footage into the backdrop, so that not only does the IB on stage look up (as well as back) at his younger self, he 'enters' the film to confront him on-screen. This highlights an element of bravery in Bostridge's performance: clearly, he is not by any means 'old' - but he must be well aware of the startling difference between the 'boy' in the video and the artificially-aged character he is now portraying.

This doesn't serve to make one want to put Bostridge in a care home - it's more to do with emphasising how much of his life has been consumed by 'Winterreise'. We're led to infer that Bostridge cannot escape the piece and has more or less become one with it, even absorbed into it. (This idea of finding autobiographical aspects in one's repertoire reminds me again of Alice Coote - specifically her excellent recital 'Being Both', which used some gloriously-sung Handel to convey the effect regular playing of both male and female roles had on the performer's identity.) In his third 'character', he has music on a stand as a prop - which he deliberately fumbles and drops, drifting from being rooted to the spot, into his more usual, mobile performance style. Has he fully 'become' the traveller, always destined to sing the same cycle, over and over? He makes his way through the Britten Sinfonia, half-onstage as if a character themselves, waiting in the wings - and in superb 'voice' throughout.

I felt that Jones did brilliantly by her leading man. With Bostridge there in the flesh, it felt like she could focus on bringing the themes alive visually around him. The evening was flamboyantly cinematic, conjuring up the Weimar effect as film noir, with IB frozen in searchlights, or trapped in broken-shard images: Orson Welles might've been pleased to see his Third Man get together with his Lady of Shanghai in this way. Equally, the English surtitles were projected within the screen rather than above it, in arresting upper case - impossible not to think of those great Saul Bass title sequences for (among others) Hitchcock... which inevitably made me think about 'Vertigo', that ruthless study of a man drawn into re-living part of his life...

I suspect one could go on finding associations like this - for example, was the single tree on stage (which Bostridge didn't really acknowledge) a nod to Beckett's Godot, where the travellers never get anywhere, and one never arrives?

This kind of thing - references to other media outside the work being performed - comes with risks attached and can fall flat. But I felt that 'The Dark Mirror' admirably escaped the potential clichés and pitfalls of 'trying to make the work relevant to a modern audience/culture', and the cliches that sometimes entails. Instead, it did a great job of showing just how many of our contemporary visual and musical techniques are relevant to 'Winterreise' and its unending greatness.